Whistler Village Beer Festival returns Sept. 9 to 15 with an expanded lineup of events. Entering its seventh year, the WVBF will expand from six to seven days and will feature double the number of events compared to 2018.
0
Aug 24, 2019 12:15 PM By: Brandon Barrett

The former Gibbons Whistler staffer not only co-founded and ran the festival in its first three years alongside Harrison Stoker, he has also attended as a beer lover, a bottler for Whistler Brewing Company, and, this year, as a brewer: Slackwater Brewing, the Penticton-based microbrewery and taproom he opened with his wife just a few short months ago, is taking part in the festival for the first time.

"This will be the complete full circle," Peyton said. "Getting to go back with my own brewery, it's kind of like the home run of all four ways of enjoying that festival." 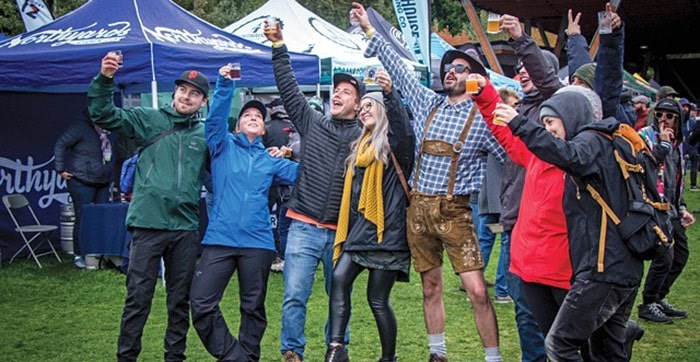 The seventh annual Whistler Village Beer Festival will feature twice the number of events as last year when it returns to the resort from Sept. 9 to 15.

Entering its seventh year, the WVBF will expand from six to seven days and will feature double the number of events compared to 2018. It runs from Sept. 9 to 15.

Brittia Thompson, marketing manager for event producer Gibbons Whistler, said the emphasis this year was to bring in more venue partners under the festival umbrella.

"What we found was that the breweries themselves were doing pop-up activations and partnering with different venues in town to do tap takeovers [during the event]," she explained.

"It's not the Whistler Gibbons Beer Festival, it's the Whistler Village Beer Festival, so if these guys want to do something, we're really happy to promote it. We really just want the whole community to come together in celebration of craft beer and everyone really benefitting from the boom that is happening in B.C."

That inclusive approach has led to perhaps the most diverse lineup of events yet, with a mix of WVBF staples, such as the always-popular Master Crafters on Sept. 13, and unique concepts like Craft Cultures on Sept. 9, a night of brews, bites, music and entertainment at the Audain Art Museum. If that doesn't wet your whistle, there will also be beer and yoga, a Function Junction block party called Axes & Ales, beer trivia and bingo at Pangea Pod Hotel, and a number of tap takeovers throughout town.

The event culminates with the Main Event on Sept. 14 and 15, featuring more than 70 breweries pouring 140 varieties of craft beer and cider in Olympic Plaza.

"We're really working a lot with different partners to come up with cool activations on the site, so it's more focused on the customer's experience within the Main Event as well as all the beers," Thompson said of the festival's final two days. "We always have a few tricks up our sleeves."

Always a popular event with brewers, a major part of WVBF's appeal is the five draft lines up for grabs. The winner of the People's Choice Award gets to feature the winning beer at Stonesedge for a year, while the three runners-up also land their brews at a Gibbons establishment. The winner of Master Crafters, a blind taste test that will focus on hazy beers this year, will secure a draft line at the FireRock.

"This one is a must-hit festival on the circuit. Ever year, just the interest alone from the breweries keeps rising," Thompson said. "I think what differentiates us is a lot of festivals just give trophies, but we give draft lines or places in fridges."

The WVBF has come a long way since its original incarnation, when it attracted roughly 2,000 beer lovers. Since then, the WVBF has more than doubled its attendance, expanded its schedule, and even spawned an offshoot festival in the Okanagan. For Peyton, who still remembers the "almighty pep talk" his then-boss and now event producer Katrina Frew gave him in the early hours of the inaugural festival's first day back in 2013, seeing its evolution has been a personal point of pride.

"I'm extremely proud of seeing how far this festival has come," he said. "We had such a grand vision at the start and then to see Kat and the team ... and everyone's contributions and seeing that festival grow is awesome. It's such a fucking beautifully well-run festival. It's super special. I still hope to remain connected to that festival for quite some time."