YVARCADE VOL. 148: Interview – Ovey Yeung Loves You Back. Life After Getting Hit By A Car.

YVARCADE showcases and highlights the lifestyle and cultural scene of our beautiful city, uncovering the misadventures and shenanigans beyond social functions and local shindigs.
Feb 26, 2015 9:30 AM By: Rick Chung

Volume 148: Life After Getting Hit By A Car. Interview with hit-and-run victim Ovey Yeung. Photo by Lawrence Lam. Calligraphy by Tanya Truong. 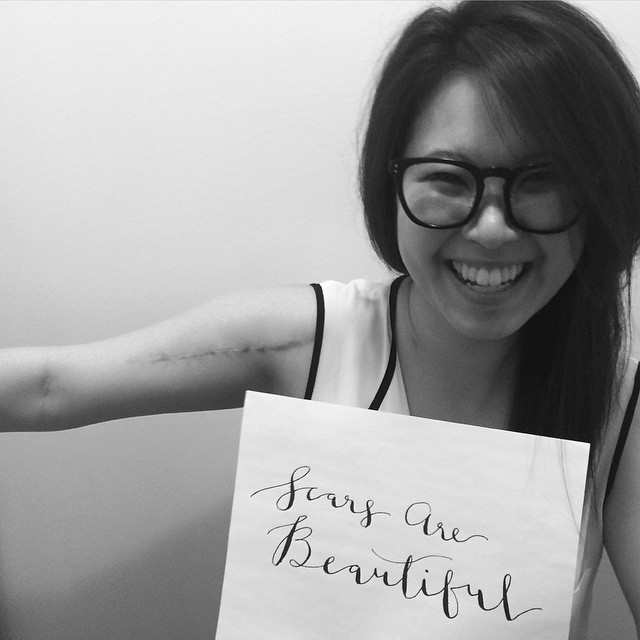 "The things I want to do wouldn't have been possible without your support. Thank you."

You probably know Ovey Yeung. I do. (Facebook tells me we have exactly seventy mutual friends.) She's a popular person and a regular social butterfly. On August 4th, 2014, she was the victim of a serious hit-and-run car accident. What followed was a roller coaster ride of emotions for her friends and family that played out all over social media and in the local news. While in the ICU and in a medically induced coma for over a week, her close friends quickly launched a campaign of support dubbed #WeLoveOvey and raised a staggering $42,963 (from an original goal of $25,000) to support her recovery costs from a broken pelvis, arm, and major brain injury.

Anyone who knows Ovey knows her entrepreneurial spirit, how she's always moving forward, and quickly. At a young age, she's already accomplished much in life and powers through her goals, racking up experiences and achievements as someone who's always been laser focused on her career. She was in the middle of planning a move to San Fransisco to further her work as a business consultant and startup executive in the tech industry when she came back for a wedding and was struck by life (and a car). It's only this twisted sort of happenstance that could slow her down, but not for long, if she has anything to say about it.

Needless to say, it's been a huge adjustment for her during the slow but steady recovery process and healing from her injuries. At every turn, she's laboured about the next step of her progress and getting back to where she was and who she was. Fortunately, all her support has been a huge aid to her recovery. It's something she was initially overwhelmed by and took a while to comprehend.

"Thinking back, it didn’t seem real at first. I had to ask [my sister] again if that [money] was for me."

You can hear about Ovey's journey and lengthy rehab process over the past six months in her own words here. Aside from social media updates and a speaking engagement at TEDxSFU, she's kept quiet, focusing on her recovery, spending time with loved ones, regaining her movement, functions, and emotions. Rehab is going well, but unsurprisingly, slower than she'd like.

"Everyone I see or speak to seems to think the recovery has been quick. Really?! Can we please speed it up a little?"

Our current digital age means Ovey's support was quickly manifesting socially and online. This is something she obviously couldn't keep track of until much later.

"Trending was exciting, but felt odd as I typically work behind the scenes."

As an experienced media and communications professional, Ovey was use to raising awareness and promoting her clients. The fact that she become the story (a big one at that) and people (unsolicited) were rallying around her was a new sensation.

"It was a little weird to see my photo on many of the news channels, not to mention across Canada! Although, thankfully, my friends picked good photos. Phew!"

Although she's kept relatively quiet, Ovey has been desperate to thank her supporters for the things that she's been able to do during her recovery which would have been impossible otherwise. It's easy to forget the trauma she went through and the slow waves it took for her to fully comprehend the parameters and level of her support. After regaining her emotional awareness, strengthening her movements and functions, she started combing through her social mentions and messages of support as she learned what happened while she was in the hospital. It was very overwhelming for someone still not fully aware of their emotions.

"When I first heard about the campaign, I was thankful, not through emotions but by evidence or result. Not so much a feeling but a fact. Remember, I didn’t have my emotions back at this point. Emotions come back slowly during recovery, at least from brain injury. Support wise, it is surreal."

What has also been hard for her is not being able to socialize, interact, or network like she use to. She's still self-conscious about talking about the accident in person and being in large groups or situations where she doesn't know everyone. She wonders what others will ask. "How did you get that badass scar?" However, she realizes the luxury of taking her time to integrate herself back into the community and talking about her experiences in recovery as a way to begin repaying the kindness she's been shown.

"Even now. I mean I knew that I knew a lot of people, but I didn’t truly know how much I meant to people until this campaign."

Ovey is clearly loved and wants to reciprocate those feelings, positivity, and thank her supporters. It's been a surreal ride for her. In the midst of regaining her emotions, she has come to terms with how much she means to others. Her support reached across the world as news spread of her accident to strangers touched by the outpouring of support shown by the community she cultivated around her.

"I don't even know where to begin. I am so grateful for everyone's support."

Scars are beautiful. In a fashion only befitting of her reputation and spirit, Ovey is keeping busy and giving back in her own way. Ovey is supporting her former classmate, Brigitta Zatko, and her campaign to spread the positive awareness and self-image around women with visible scars from traumatic experiences and serious medical conditions like CHD. At first, Ovey was hesitant to expose her visible scars in public (and even considered plastic surgery), but came to realize and embrace how they represent the struggles she's overcoming as a badge of honour and symbol of her confidence. (You can contribute yourself by posting a photo with your scar and tagging #ScarsAreBeautiful.)

The incident has taught Ovey more than ever to, "Invest in people." Many of the people she invested in paid her back in kindness and support during her lengthy recovery. A peek at her Instagram shows this through a constant stream of selfies of her with friends and loved ones all smiling and celebrating her continuing progress.

When asked about moving forward from her accident, Ovey laughs it off. "I laugh because it will always be a part of me." Her emotions are back. She's back and determined follow through on her goals. By her own estimates, she's been set back between nine months to a year of her life plans. (I assure you she's still far ahead of the rest of us.) Knowing her, she's probably looking to make up for that lost time. That's just who she is.

"2014 was an amazing year except for the fact that I got hit by a car in the second half. Haha."