#YVRShoots - Hurley's on Alcatraz This Season

This series had its genesis when I began photographing Vancouver area location shoots in the summer of 2010 to get over a post-Olympics funk.
Susan Gittins Oct 18, 2011 1:52 PM

Every since I took a ferry to visit the infamous Alcatraz prison in San Francisco Bay to hear stories of its history, stroll Broadway in the main cell house and take a turn in solitary confinement, I've become a bit obsessed with all things Alcatraz. So you can imagine my anticipation for mega-producer JJ Abrams's new sci-fi mystery island series about the present-day reappearance of 302 missing 1960s inhabitants of the Rock. Alcatraz is expected to air in early 2012 on FOX in the U.S.

Blonde Sarah Jones is the San Francisco police detective Rebecca Madsen investigating the reappearance of  wardens and prisoners missing for 50 years from the notorious island prison and Jorge Garcia (Lost's loveable Hurley) is the Alcatraz expert Dr. Diego "Doc" Soto she partners with to delve into its secret history and figure out where these prisoners have been and why they're back.  During each of the first season's thirteen episodes this unlikely duo has to catch a different infamous criminal from America's past, one that hasn't aged since the 1960s and is now loose on the streets of Vancouver made to look like the streets of San Francisco.

On the Friday night ahead of the Canadian Thanksgiving weekend, the takedown happened downtown outside the Royal Bank at Granville and  West Hastings. Sarah Jones and Jorge Garcia drove up in a vintage Mustang to enter a building already surrounded by "picture" San Francisco police officers and a SWAT team. Cast and crew filmed through the night until dawn broke around 6 a.m. on Saturday, or as one of the actors dubbed it -- "the longest night shoot ever". 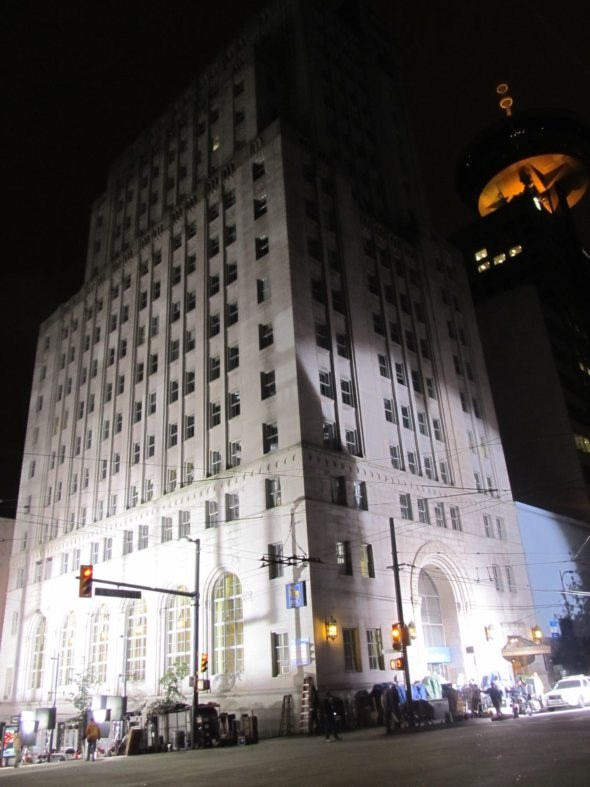 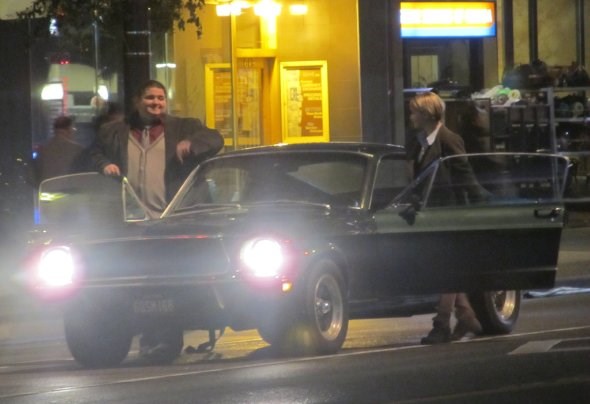 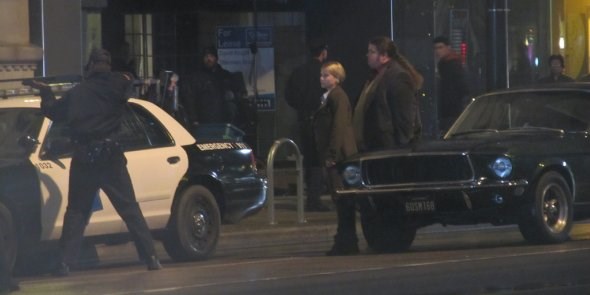 At the beginning of this year, JJ Abrams flew up here to oversee the filming of Alcatraz's pilot, plus a hilarious scene on his other show Fringe (what Alcatraz crew jokingly calls its "evil sister") of Jorge Garcia getting high with John Noble's Dr. Walter Bishop. I tried to find Alcatraz on location during Abrams’s visit but kept showing up after they’d wrapped for the day -- first in Queen Elizabeth Park where they filmed a standoff in a fake cemetary and then at a house in Shaughnessy where nobody remained except crew dismantling the set.

Luckily I caught one of the pivotal scenes of the pilot when Sarah Jones's detective character meets Jorge Garcia's Alcatraz expert and comic book enthusiast Dr. Diego "Doc" Soto at his store Doc's Comics  & Collectibles, actually an abandoned bank building on West Pender dressed to look like a comic book store. I watched Jones in her off-white raincoat enter Doc's in take after take in late January, but never caught a glimpse of Garcia inside. 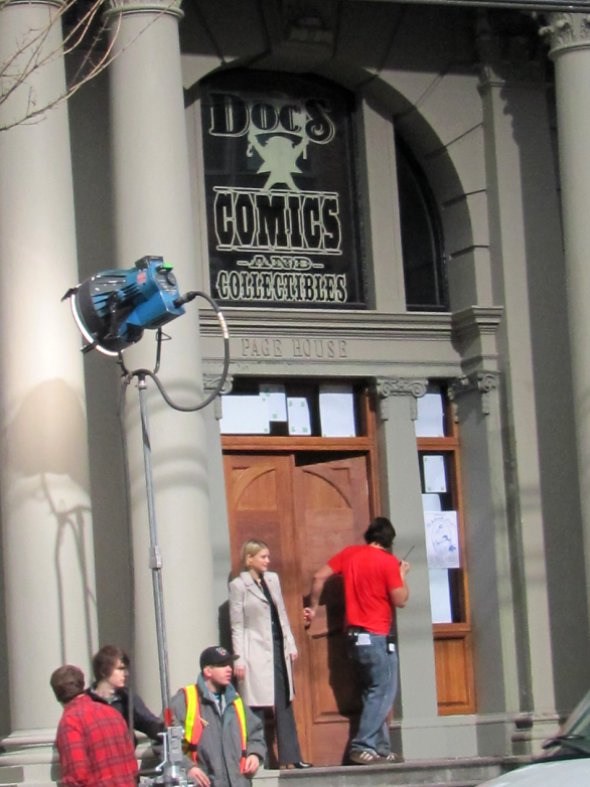 That evening in Gastown I fnally spotted Jorge Garcia chatting outside the Blarney Stone turned Ray's Bar ahead of a scene of Sarah Jones entering the bar and talking with Garcia's Doc inside. Below is my failed photograph of Garcia, which proved suprisingly popular on Flickr (with over 5,000 views) because he looks like he's still Hurley time-travelling on Lost. 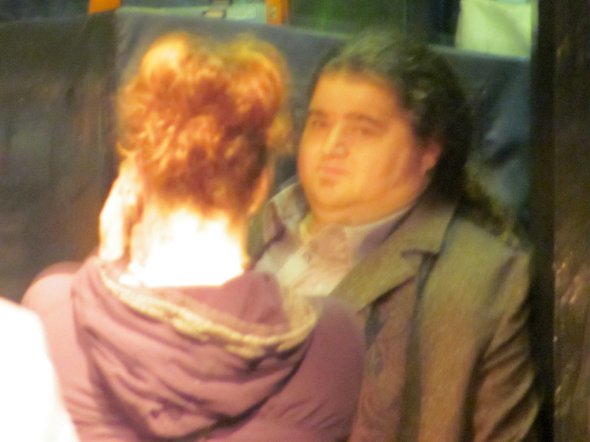 I didn't see any of the actors who played prisoners like Vancouver's own Ben Cotton (Harper's Island, SunflowerHour) or wardens because Alcatraz spent the rest of the pilot here filming prison scenes in studio or out at Riverview Hospital in Port Coquitlam. And then Alcatraz re-located to San Francisco to film key scenes at the actual prison and other local landmarks.

After a two to three month wait, Alcatraz producers finally got to pitch the pilot to FOX execs ahead of the New York upfronts in May when American networks announce their new 2011-12 schedules to advertisers and the press. Oddsmakers didn't expect Alcatraz to be picked up because FOX had so few drama slots but a FOX bloodbath the week before (the network axed four drama series including Vancouver-shot Human Target) opened up the schedule.

Is Alcatraz the next Lost? That was the buzz at Comic-Con, the annual late July geek fest in San Diego. I'd argue that Fringe is the next Lost, but why not? Alcatraz has the pedigree with former Lost writer Liz Sarnoff as showrunner, Lost director Jack Bender as exec producer and Lost's Hurley as one of the leads. Alcatraz's pilot screened twice at Comic-Con -- first at the Warner Bros. preview night of highly-anticipated pilots Alcatraz, JJ Abrams's Person of Interest and Vancouver-filmed pilot The Secret Circle; and second before a big Saturday audience followed by a Q & A with Liz Sarnoff, Sarah Jones and Jorge Garcia.

In mid-August, someone spotted Jorge Garcia at a cafe on West 10th. The spotter's co-worker Graham Hofs jokingly tweeted: is this a #yvrshoots or a #yvrvisit? Fortunately for us it's a #yvrshoots until February/March next year. Filming of Alcatraz resumed in August but it took a while before it was spotted on location. Two graphers found and met Sarah Jones and Jorge Garcia filming at a house in New Westminster at the end of August with "picture" Walnut Creek squad cars parked outside. I next heard of them filming at Burnaby City Hall in mid-September, with half a dozen squad cars, mostly San Francisco, in the parking lot for the day shoot and filming at the Burnaby Art Gallery on Deer Lake for the night shoot.

The next day Alcatraz came downtown for a big shoot at Victory Square Park, where crew had set up a Farmers Market for what turned out to be a sniper scene for episode two entitled Ernest Cobb. The day began with a scene of Sam Neill, the third in the trio of Alcatraz's main cast, getting out of a black SUV, his gun drawn. Neill, who'll always be Reilly, Ace of Spies to me, not someone from Jurassic Park, plays Emerson Hauser on Alcatraz, a government agent who knows more than he's telling and initially obstructs Sarah Jones's character's investigation. 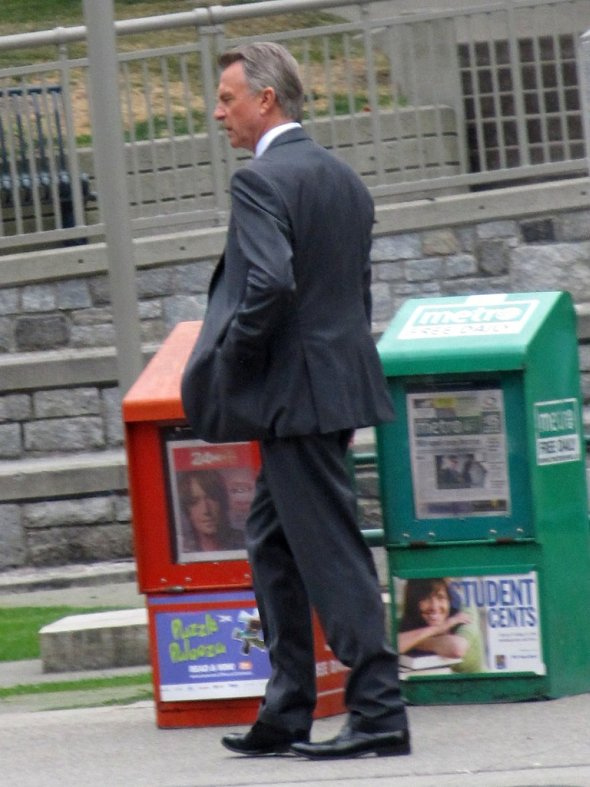 Next Sarah Jones did a running scene, leaving from the south-west corner of Hastings & Cambie and running across Hastings in the crosswalk towards the Dominion Building. Police never stopped traffic for her. She ran on the green light in take after take. 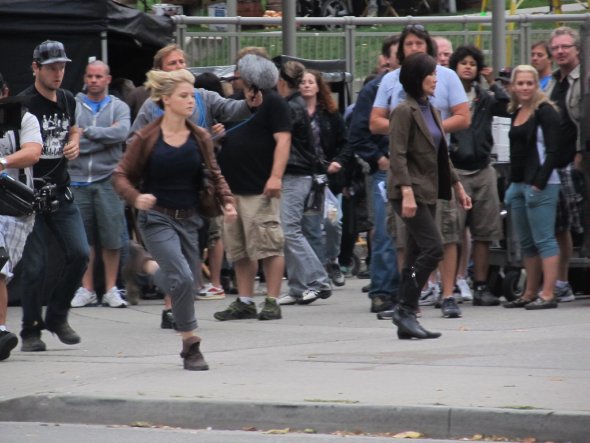 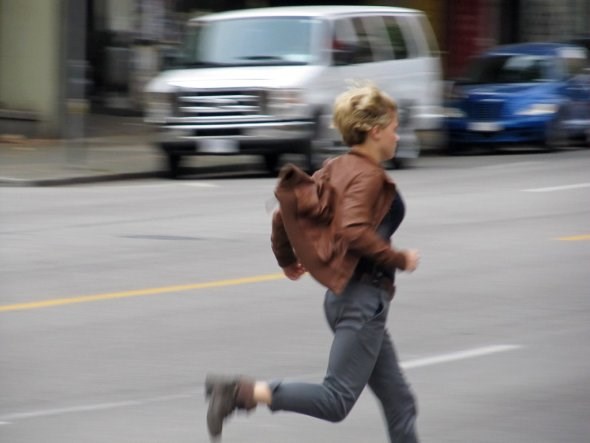 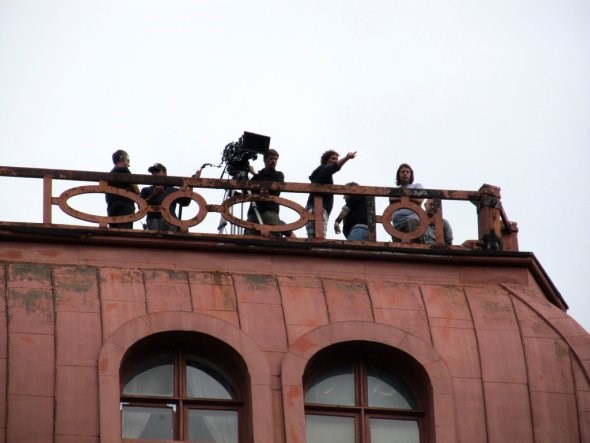 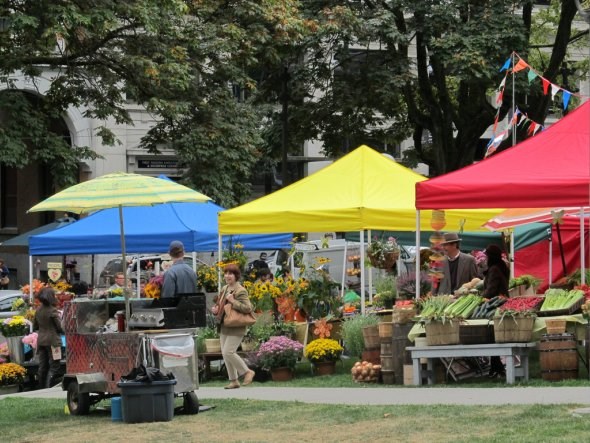 The next day Alcatraz filmed in an alley in Gastown where Parminder Nagra's character is put in an ambulance after being shot by sniper Cobb and nearer the end of September I heard they were filming inside the Terminal City Ironworks complex in east Vancouver and even later outside Griffins Boxing in North Vancouver.

Alcatraz returned downtown this month on Thursday, October 6th, to film the fourth episode, Cal Sweeney, lighting up the exterior of the Royal Bank building at Granville and Hastings for scenes in its historic interior, shooting right through until 7 a.m. the next morning.  The next night, October 7th, crew didn't set up any big lights to give the exterior scenes a more natural look. Police officer extras and squad cars waited on the 600 block of West Hastings (closed to all traffic except buses) for cast Sarah Jone and Jorge Garcia to arrive. Jones drove the Mustang to the standoff in each take. Later Sam Neill arrived on set for a scene of him getting out of his black SUV and joining the other two, but bystanders could barely make him out in the dark and the manufactured San Francisco fog from the smoke machines. 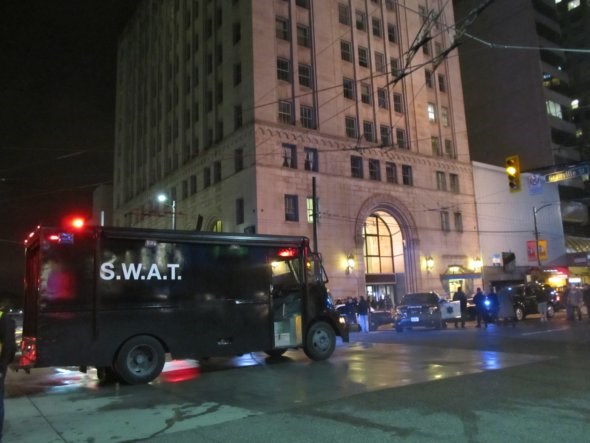 Eric Johnson of Rookie Blue is the Alcatraz criminal of the week, Cal Sweeney, a smooth-talking bank robber convict interested in safety deposit boxes and the secrets they contain. For the second night in a row, Alcatraz filmed right through to dawn, with Jorge Garcia wrapping around 6 a.m. That's a long shoot for five-and-half pages of dialogue. Vancouver actor and stunt professional James Bamford, who stunt-drove one of the police cars to the scene, is the one who dubbed it the longest night shoot ever but it sounds like it's worth it. Bamford calls Alcatraz a "kickass" show that he can't wait to be seen.

Update: The two-hour series premiere of Alcatraz is scheduled to air on CITY-TV and FOX on Monday, January 16th, at 8 p.m.