#YVRShoots - Sanctuary Takes its Greenscreens Outside in Burnaby

This series had its genesis when I began photographing Vancouver area location shoots last summer to get over a long post-Olympics funk.
0
May 20, 2011 9:54 AM By: Susan Gittins

I did not expect to be able to feature all-Canadian sci-fi success story Sanctuary in this series because it almost never goes on location, filming everything on greenscreen at its Burnaby soundstage, with virtually no physical sets whatsoever. And then a friend of a friend’s husband watched Sanctuary bring its greenscreens outside a week ago to film a bloodied and beat-up Amanda Tapping at a nearby office complex, masquerading as an airport on the Indian Ocean islands of Comoros.

When I arrived, I joked with Sanctuary crew about the number of green travelling mattes (used for special effects) they’d brought to a real location, including a stack of smaller sizes on a cart at the back of their studio, an immense street-width screen by the Departs door and one regular-sized screen at the Arrive door. This is where I photographed guest star Sandrine Holt and Sanctuary star Amanda Tapping already in character and about to turn around to the camera to meet guest stars Carlo Rota ( 24 and Little Mosque on the Prairie) and Martin Cummins (V and Shattered) on the steps above. Sanctuary had filmed explosions the day before at Mammoth studios and Tapping did not go unscathed: wardrobe had dressed her in an artfully ripped sweater and bandaged arm and makeup painted blood on her knees. 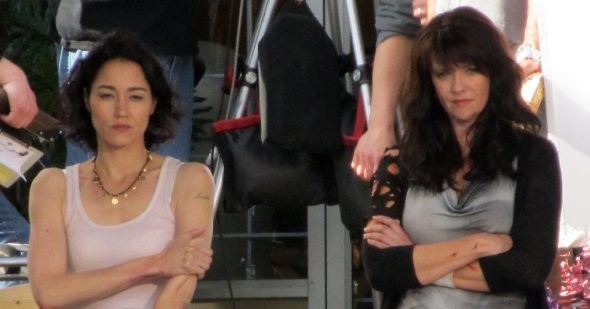 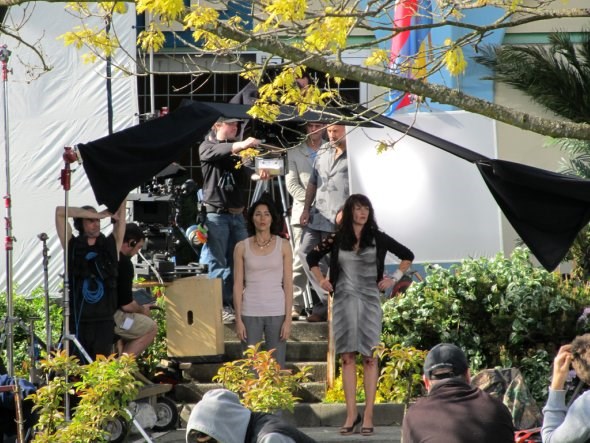 Who is Amanda Tapping? She is our Queen of Sci-fi after ten seasons in combat boots on Stargate SG-1 as scientist-soldier Samantha Carter, followed by more seasons as Carter on Stargate spinoffs and then coming-up-on-four seasons in stilettos on Sanctuary as immortal 160-something Dr. Helen Magnus from Victorian England, who rescues genetic mutants called Abnormals and harbours them in her stately gothic mansion overlooking the fictional Old City in the modern world.

What makes Sanctuary so unique is that this castle-like facility doesn’t exist, except as an empty set with some minimal props (Tapping has compared it to doing theatre). Everything else is filled in later by computer animators and the sheer number of special effects is staggering. What ends up on the TV screen has a graphic-video-game look which sometimes takes me out of the story. On the other hand, I do appreciate the creative filming styles: like male lead Robin Dunne wearing a helmet-camera to film an entire episode from the point-of-view of his character Dr. Will Zimmerman as he temporarily transforms into a scaly, lizard-like, climbing creature in Season 3's recently-aired Metamorphosis. Dunne’s #Sanctuary Photo Friday tweet last week was a funny twitpic of him in that helmet-camera. 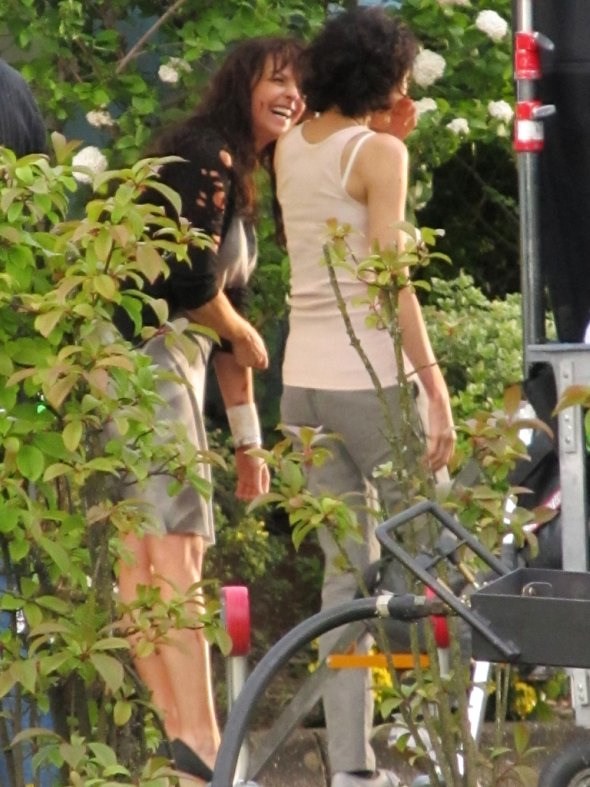 Known as the little show that could (sold to 100 countries so far), Sanctuary also leads the way in social-media-powered TV shows with a following well beyond its size. It was one of the first shows to have its own Twitter account, @SanctuarySeries, and creator Damian Kindler and the main cast are all avid tweeters. Amanda Tapping even has her own Twitter hashtag, #TappingTuesdays, where she answers fan questions.

Clearly, Sanctuary has been web-savvy since its inception. Damian Kindler (a former Stargate writer-producer), Amanda Tapping (established Stargate star) and Martin Wood (a former Stargate director) teamed up as producers and owners of the new show and took it straight to sci-fi fans, a group known for living and breathing on the web, in eight streaming webisodes. Millions of hits later, they had the fanbase to make the upgrade to TV. Syfy picked it up for a 13-episode TV series, premiering in the fall of 2008 to high ratings. A second 13-episode season followed and then a third 20-episode season, with the back ten airing now. Who would have predicted in 2007 when web series Sanctuary first streamed online that TV series Sanctuary would be filming its fourth season in its Burnaby soundstage four and a half years later?

So Sanctuary has an unparalleled reputation for production innovation for its use of greenscreen techniques and for being the first North American TV series to use RED cameras (which record straight to hard drive doing away with film and tape), but critical praise and awards for its storytelling are slower in coming, with one huge exception. The annual Leo Awards for BC-made film and television embraced Sanctuary from the start, honouring it with four awards in 2009, including lead Amanda Tapping and then-guest star Robin Dunne, and with seven awards in 2010, including  now-lead Robin Dunne and supporting actor Christopher Heyerdahl, who plays two characters on the show: Helen Magnus’s Neanderthal assistant Biggie and her Victoria-era lover John Druitt (aka Jack the Ripper). 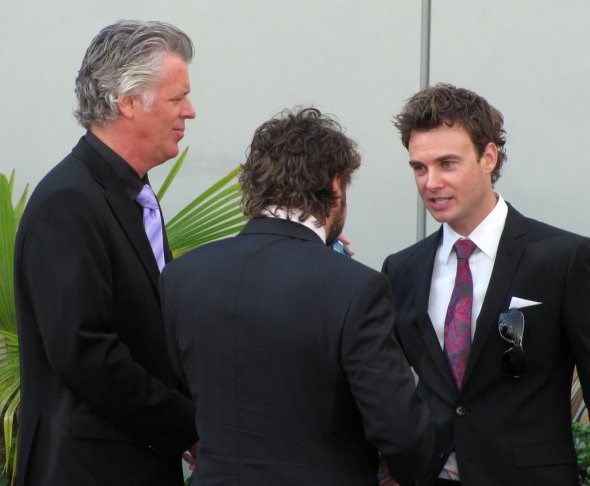 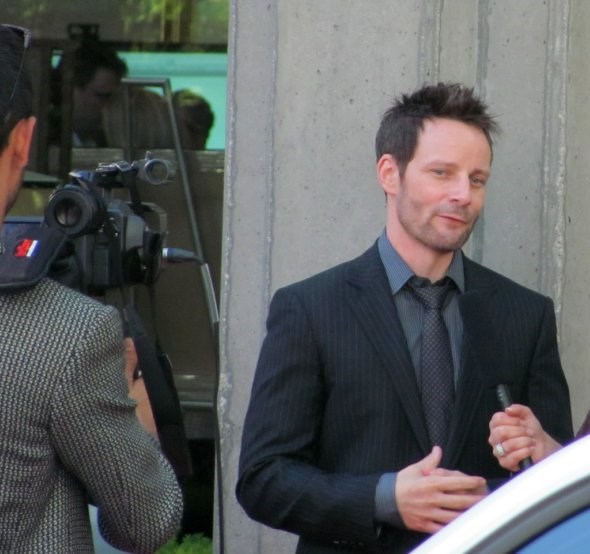 I photographed Sanctuary producers and cast on the red carpet at the Leo Awards last year without knowing exactly who they were, although I could see all the other nominees wanted a photo with Amanda Tapping just like the thousands of fans who lined up to see her as Stargate's Sam Carter at San Diego's Comic-Con. Above is my photo of Sanctuary special effects guru Lee Wilson and creator Damian Kindler talking with lead Robin Dunne and my photo of a spiffed-up Ryan Robbins, nominated for best supporting actor for playing Henry Foss, the quirky tech guy and parttime Lycan (werewolf).

This year Sanctuary scored a whopping 17 Leo nominations, including a Best Dramatic Series nomination and acting nominations for leads Amanda Tapping and Robin Dunne, and supporting Ryan Robbins.  It should take home more than half of these as awards since rival Stargate Universe SGU made no nomination submissions.  And I'm betting that this is Sanctuary's year to win Best  Dramatic Series at the awards ceremony on Saturday, June 11th.

Update: Smallville upset Sanctuary, winning the Leo for Best Dramatic Series. And the episode above turned out to be 4x04 Monsoon, which ended with a surprising lesbian kiss betwen Amanda Tapping and Sandrine Holt. No wonder they're giggling in the photo above.