This series had its genesis when I began photographing Vancouver area location shoots in the summer of 2010 to get over a long post-Olympics funk.
Susan Gittins Nov 9, 2012 1:40 PM
Update: While taped in a Burnaby studio, Package Deal is set in Toronto.
Partway through the live taping of  sitcom Package Deal's pilot episode last night I had to zone out for a bit, exhausted from laughing non-stop for hours. Of course the sitcom is laugh-out-loud funny, although the details are emnbargoed until after the premiere airs early next year on Citytv. I can tell you that the laughs for the acerbic Harland Williams's flubbing of his lines were just as big as when he did it right. "That's not the line," Williams told the audience. "Stop laughing, I'm sensitive."  Williams, more than anyone else, cracked up his fellow cast members on set.
Meanwhile, wrangler/perfomer Dave Dimapalis kept us entertained  in the audience between takes by coaxing volunteers to play progressively lewder games. Bachelorette #1 in the Bachelor game quipped "100% down" when asked how she would label herself in a store. Is it any surrprise the blindfolded bachelor picked her from three possible candidates? I was rooting for Bachelorette #2 , by the way, who described herself as "a cub not yet a cougar."  And halfway through the taping,: pages came round with pizza slices from the Flying Wedge to keep our energy up. 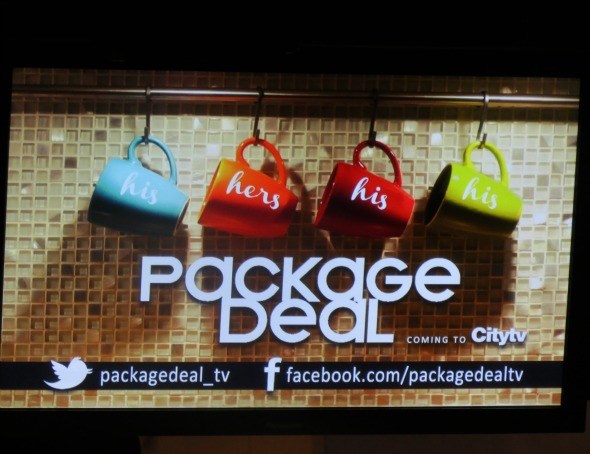 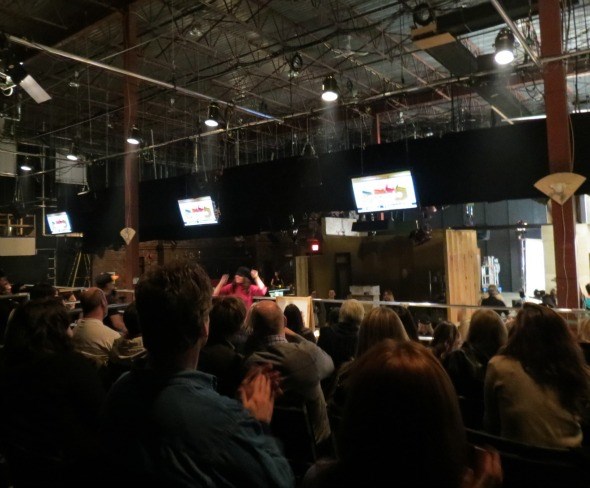 As the logline says, Package Deal is a  new sitcom about three dysfunctionally close brothers and the woman who comes between them illustrated by the His, Hers, His and His mugs on the show's poster. It's about lawyer Danny (Randal Edwards) who meets the perfect woman Kim (Julia Voth) who thinks he's too good to be true until she meets the two older brothers who raised him and won't let go: womanizing meat salesman Sheldon (Harland Williams) and dumped house husband Ryan (Jay Malone).  Will Danny ever be his own man? Not likely if the show is to be successful.

A rare-for-Vancouver four-camera situation comedy -- A, B and C cameras are dedicated to a specific actor while the X camera moves around and provides extra coverage -- Package Deal boasts an all-Canadian cast.  Creator Andrew Orenstein, who's written for 3rd Rock from the Sun, Malcolm in the Middle and 18 to Life, wrote the edgy, hip and hilarious pilot script. And while the whole pilot had been shot in studio before the live taping last night and only reshoots of  certaim scenes were done in front of us, the writer-producers kept inserting new lines into takes on the fly to keep it fresh. Plus there was some improv from the actors,  all talented comedians in their own right. I was mildly disappointed not to see the pilot's big guest-star Eugene Levy of SCTV and American Pie fame interact live with the cast on set but we did watch his scenes in playbacks on the screens in front of us.

If you're wondering why there are only two non-spoilery photos in this post, it's because Package Deal asked me to withhold photos of cast, sets and filming until next year when I can write a longer report  --  like I did with Thunderbird Films' other Vancouver sitcom, the YTV and Disney XD hit Mr. Young.