This award-winning B.C. distillery is run by two generations of one spirited family

Two generations of one Vancouver Island family have created not only recipes for award-winning spirits, but also the recipe for a successful modern craft distillery business. 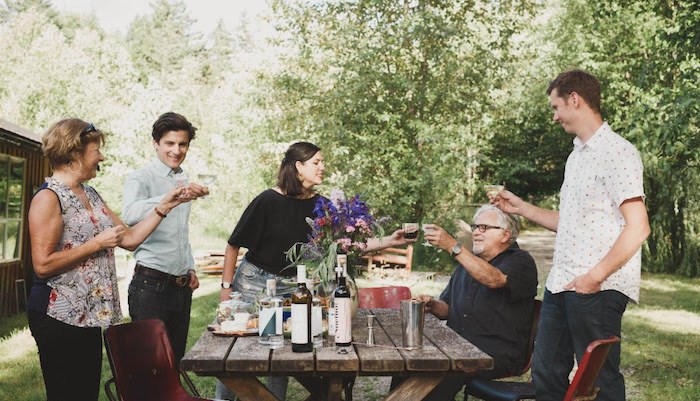 Two generations of one family are distilling some of B.C.’s best spirits on Vancouver Island. Photo courtesy Ampersand

A great cocktail is a study in balance and the result of a skillful combination of ingredients. Of course, it's not a cocktail without spirits, and here in B.C. we are home to a distillery that was started by two generations of one family. They've created not only a recipe for an award-winning gin and other spirits, but also the recipe for a successful modern craft distillery business.

The story of Ampersand Distilling Co. begins with the melding of Jeremy Schacht and his wife, Jessica's love of cocktails and the Cowichan Valley farm owned by Jeremy's parents, Stephen Schacht and Ramona Froehle-Schacht.

Jessica and Jeremy had been mastering their home bar skills with proper martinis and whiskey sours down in Victoria, when they opted to move up island and join forces with Stephen and Ramona to establish a distillery from the ground up, literally, at the farm.

The farm happened to have a natural spring on the land that they dug out of the hillside, setting up a proper dam to access the water. Jeremy says they spent some time poring over old books to help understand how to locate the spring's source and get things flowing again.

The flavour of their Ampersand Gin, and their Per Se Vodka, begin then, with the water, which is part of the terroir of the spirit, to borrow a term from the world of wine. 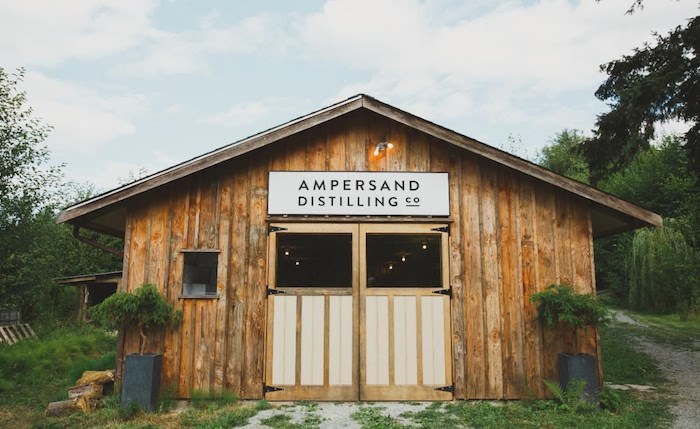 To distill their spirits, Jeremy added his degree in chemical process engineering to excellent use, as he designed the still himself that they use at Ampersand. Jeremy says designing the equipment himself gave them the ability to "do exactly what we wanted [the stills] to do, and distill to the quality we wanted."

"It's not super common to start a distillery by first designing the stills," admits Jeremy with a laugh during our phone interview.

Then again, Ampersand isn't a super "common" kind of distillery. The began with gin - a favourite of the younger Schachts - using a recipe it took them a year to develop. Their approach to the versatile and much-used spirit is their "locally-made take on the classic London gin."

Ampersand says their gin is a "contemporary" or "new western" spin on the typical juniper-forward flavour profile. Their aim is to offer products that really reflects the land and the resources of B.C. - they use B.C. wheat and locally-sourced botanicals, as well as that pristine on-site spring water, to create their spirits.

Voted B.C.'s best gin in 206, 2017, and 2018 at B.C. Distilled, Ampersand Gin is quite versatile - Jeremy and Jessica say they've tried it out in all their favourite cocktail recipes and it really works, though, of late, Jessica has had to abstain, as they are expecting their first child - and Stephen and Ramona's first grandchild.

After launching their gin, Ampersand heeded the cries for a vodka, and have in the five years since their debut branched out recently to produce two more stand-out products.

The first is their limited edition holiday season Nocino! which is an Italian liqueur made from local honey, organic wheat and green walnuts that they harvest themselves in the summertime. Jeremy and Jessica describe climbing ladders to gather the green walnuts, getting an escape from being indoors at the distillery and its tasting room on beautiful summer days. 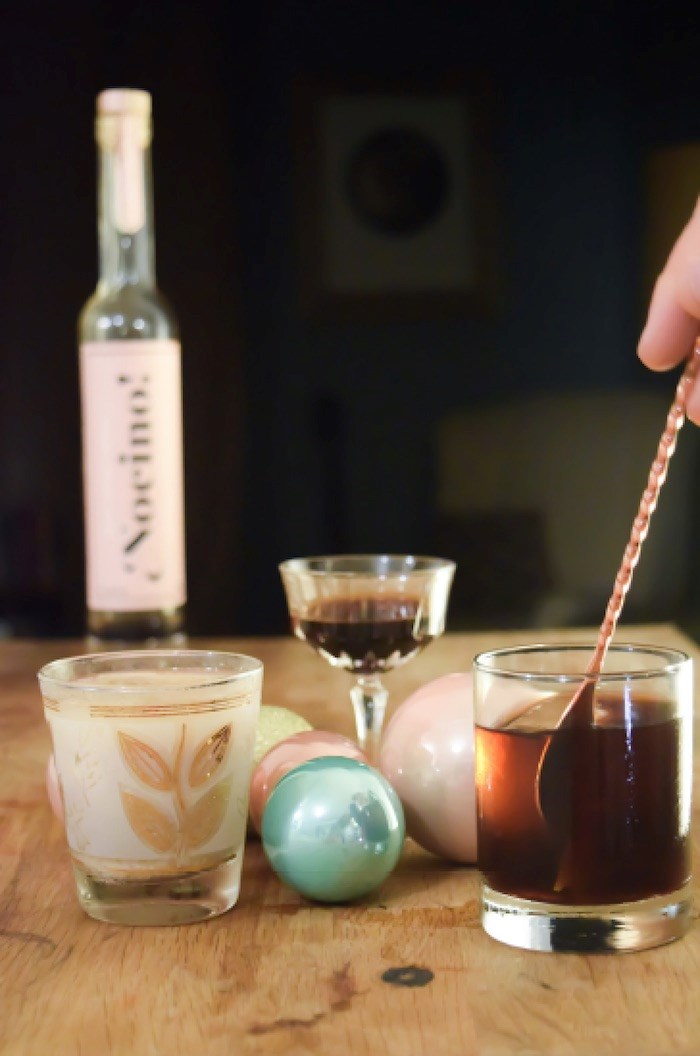 Nocino is an Italian liqueur made with green walnuts. Photo courtesy Ampersand

The Nocino began as something they tested out at home on their own, then they felt comfortable releasing it as a small-batch product. The spirit is lovely to sip on its own before or after a meal, but it can also pop into cocktails and hold its own, like as a sub for Sweet Vermouth in a Manhattan, for example.

Ampersand's Nocino won a gold medal at the 2019 Canadian Artisan Spirit Competition, and was the only product to receive a double gold award in the non-fruit liqueur category at SIP Northwest's 2019 Best of the Northwest Competition. They've doubled the batch this year, and you can find it at select farmers' markets and private liquor stores (including Legacy Liquor Store in Vancouver) as of November 16.

The Schachts joke that they've been at work trying to produce all the ingredients they need themselves in order to make one of their favourite classic cocktails - the Negroni - which is how they've come to make their own Imperative Dry Vermouth. Crafted using wormwood they grow themselves and grapes from the Saanich peninsula, the floral apertif is a great addition to cocktails or to sip on its own.

Their vermouth counts among its botanicals orris root, which Jessica says they've been testing out as a cultivar on the farm. It's a serious labour of love, because orris takes three years of growing before two years of curing and drying. Out in their greenhouse Jessica says they've got their hands in the dirt testing out growing coriander, which has proven finicky in their particular part of the Island. 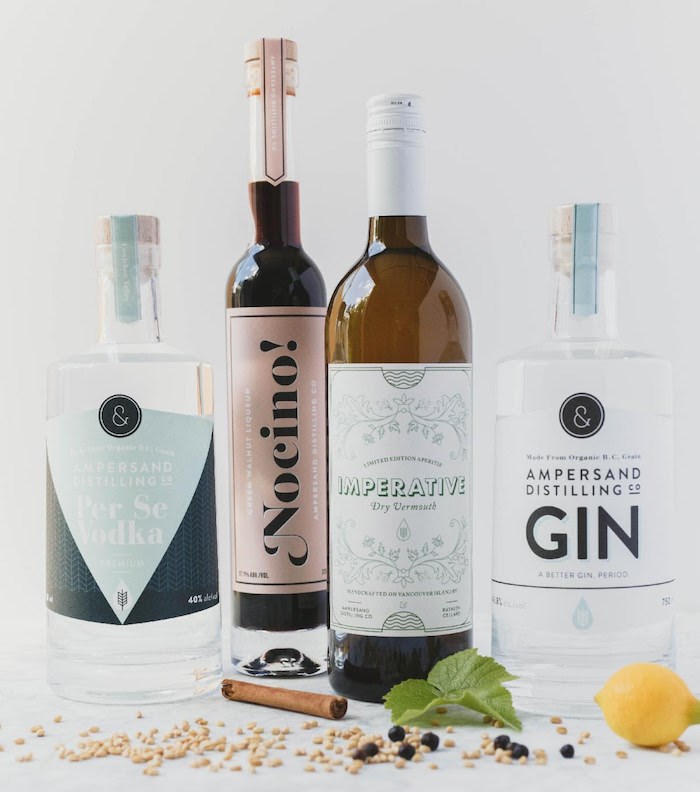 Gin, vodka, Nocino, and a vermouth round out the offerings from B.C.’s Ampersand Distilling. Photo courtesy Ampersand

Ampersand continues to be hands on in the marketing and distribution of their very B.C. bottles by repping themselves to B.C. restaurants, such as Vancouver's acclaimed Burdock & Co. and The Mackenzie Room, and Tofino's celebrated Wolf in the Fog, where you can find their spirits at play from their bars, with delightful results.

Additionally, Stephen and Ramona have long had a presence at local farmers' markets with their farm-grown produce, and now Ampersand has a table, too. It's an opportunity for the family members to engage with their customers, talk about cocktails, and - thanks to relaxed B.C. laws - offer samples.

That direct one-on-one connection is so key to Ampersand, which took its name from the "and" symbol that also signifies the notion of a profound connection - chiefly that of the two family generations, but arguably that of land and product, customer and business, and spirit and cocktail components.

There's also that precarious connection between family and business. "It's so have great role models for how to build a family and a business," says Jeremy of his parents, who he says have long been entrepreneurs.

And as entrepreneurs themselves, Jeremy and Jessica are planning to take a fluid approach to life post-baby and the business.

But if there's one thing Jessica knows for sure, it's what cocktail she wants to drink as soon as she's able.

It's a Negroni, of course.