This award-winning New West breakfast spot has been through some big changes lately, including launching a first-ever dinner menu (without a pancake or omelette in sight).
Sep 23, 2019 10:41 AM By: Lindsay William-Ross 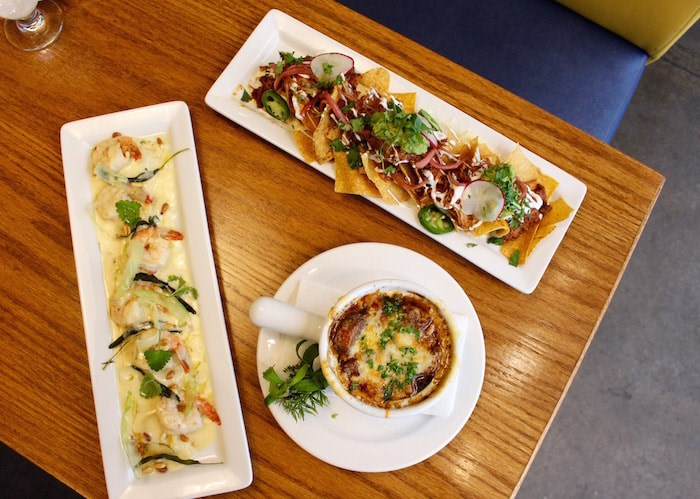 For some time now, breakfast seekers in Metro Vancouver have flocked to New Westminster's Angelina's. Braving long waits, diners have become loyal to Angelina's massive AM menu of hearty eats, from everything egg-y to their signature Dutch fare and beautiful fresh fruit.

Earlier this year, Angelina's embarked on a major change, starting with a big move from their more modest Quayside digs to take over a bigger, brighter, Fraser-facing space at the River Market (in the space vacated by Wild Rice). 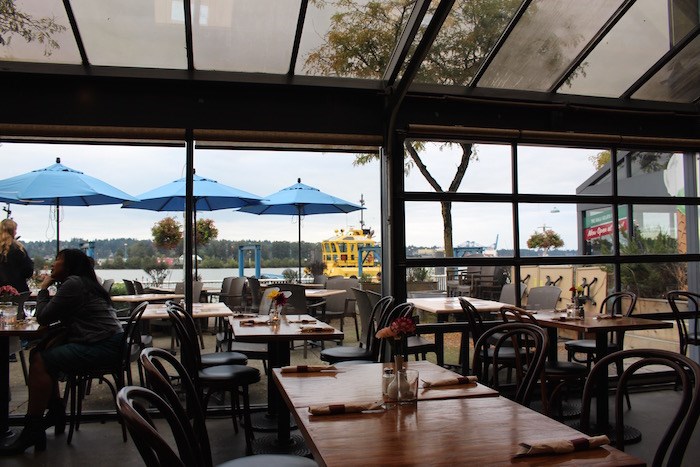 Inside Angelina’s just before the sun goes down. Photo by Lindsay William-Ross/Vancouver Is Awesome

The bigger restaurant means more plates of pannekoeken for early risers and midday brunchers, and big waits for prime time breakfasting. But Angelina's has also grown their offerings, ditching the Dutch and adding on Happy Hour and dinner-time menus, along with expanded hours.

Angelina's is so well-known for their breakfast that even their own website URL is breakfastnewwestminster.com. And just this month, Angelina's was awarded top honours in all the breakfast-related categories in the New Westminster Record's Readers' Choice Awards.

So how does Angelina's approach dinner? The vibe in the renovated River Market restaurant space gets a little more grown-up (though kids are, of course, welcome) with live jazz music on select nights (and pop-rock hits otherwise), the candles are lit, and the food changes completely. 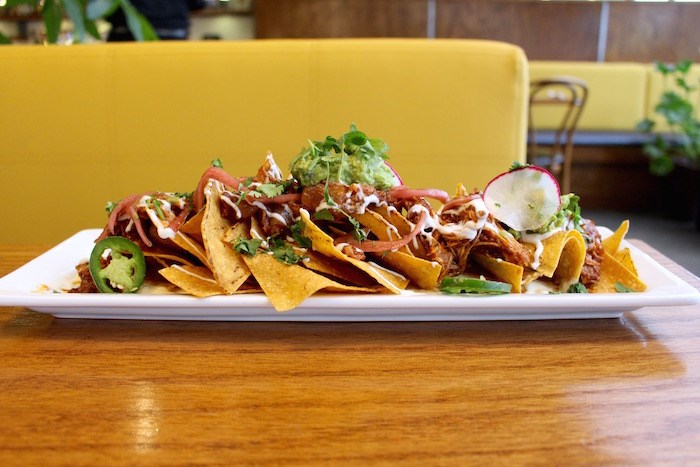 A new chef was brought on to create the dinner menu, with the mandate being make good on the restaurant's every day promise - to serve good food made from scratch. Now in the late afternoons and into the night out of Angelina's open kitchen are coming scratch-made comfort classics with global flavours, prettily plated.

A 3-5 p.m. Happy Hour menu includes familiar bar bites and appies like mini burgers, poutine, and fries. Our server says he swears by the Korean-style spicy wings with a housemade sauce, while I tucked into the Pulled Pork Tostadas - basically a cousin of nachos - featuring braised pork in an orange chipotle sauce with a crema base, fresh guac, and pickled onions on thick and crunchy tortilla chips.

Dinner is served from 5 p.m. to close, and includes things like a hearty French onion soup, an Asian-inspired salad, guac with tortilla chips and plantain crisps, burgers, and bigger plates and bowls, including a tofu rice bowl, fish and chips, steaks, and seafood. 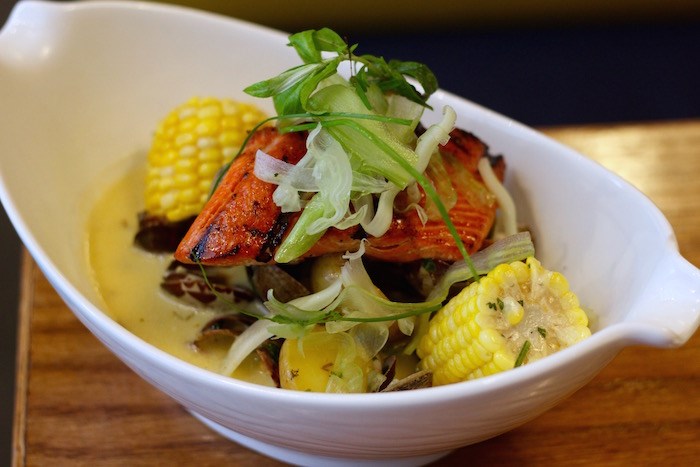 A dish like the Clam Chowder + Wild Salmon is a bit of a love note to B.C., thanks to its sweet Chilliwack corn and fresh seafood, and taking the familiar dockside fare away from its more rustic, cream-focused roots and letting the flavours of the ocean and the summer shine. It's a far cry from a massive Dutch pancake heaped with whipped cream and fruit and thick Dutch syrup - which is impressive but also a gamble.

With their dinner, Angelina's is smartly sliding into the New West scene and to some extent filling a void that in other communities is typically filled with a restaurant like a Cactus Club, for example, where you can get reliable, gently upscale, approachable and diverse fare. Neighbours in the River Market focus on niche eats, like BBQ, pan-Asian, or vegetarian, while other restaurants close by in the area are split between modern upstarts like Piva and El Santo, pubs, and fast casual. 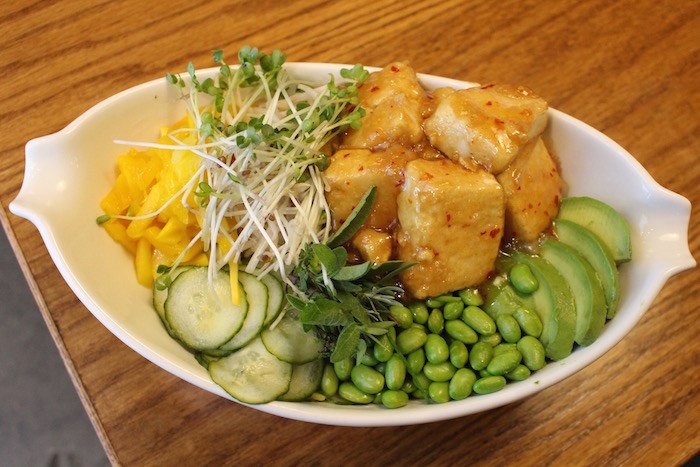 The restaurant says their dinner menu is in its "soft launch" mode, but they are up and running with it, daily until 11 p.m. While breakfast and brunch is first-come first-served, there were a few "reserved" signs on tables at dinner, so you may be able to secure a spot if you get in touch with them ahead of time.

Angelina's Dutch Corner is located at 810 Quayside Dr #122 in New Westminster at the River Market. 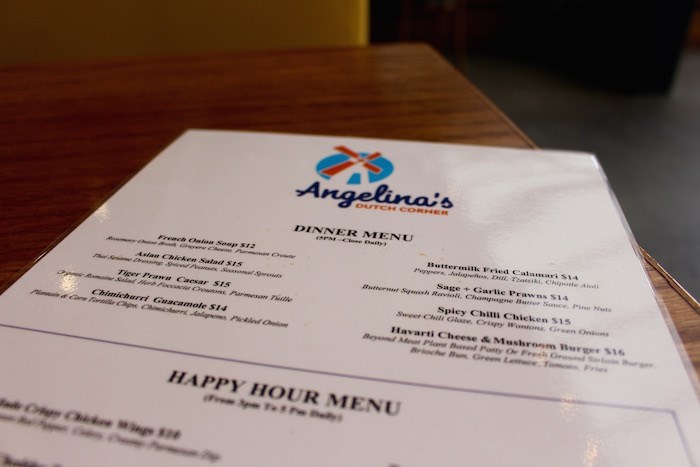 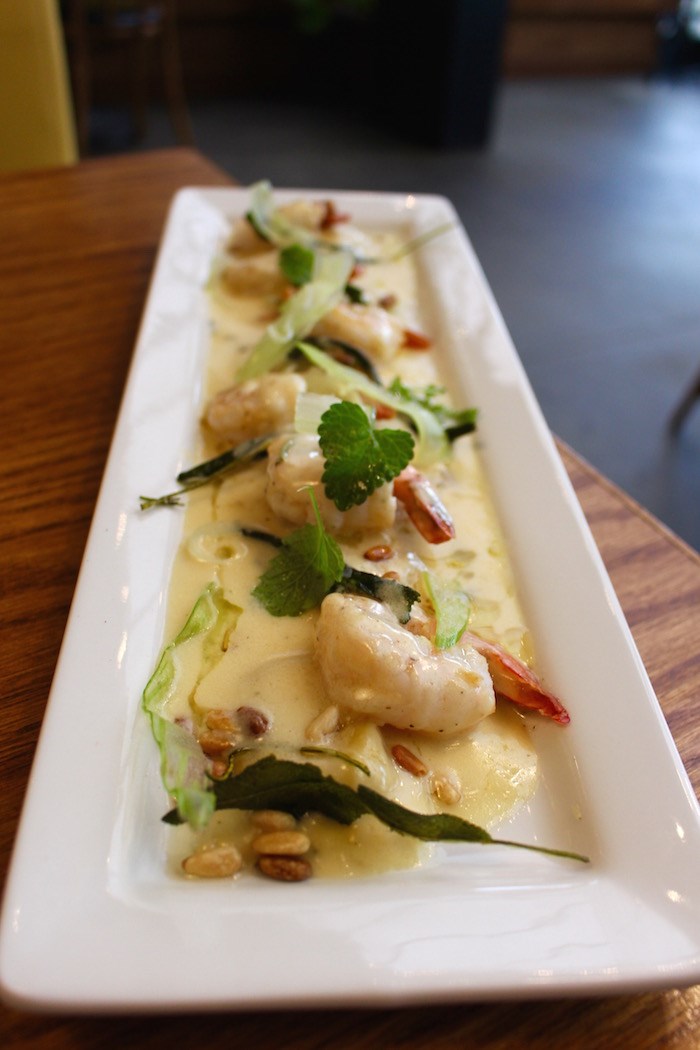