B.C. restaurants could lose up to 100,000 jobs over three months

B.C.’s restaurant and food service industry is struggling with the economic consequences of COVID-19
Mar 21, 2020 2:21 PM By: Hayley Woodin 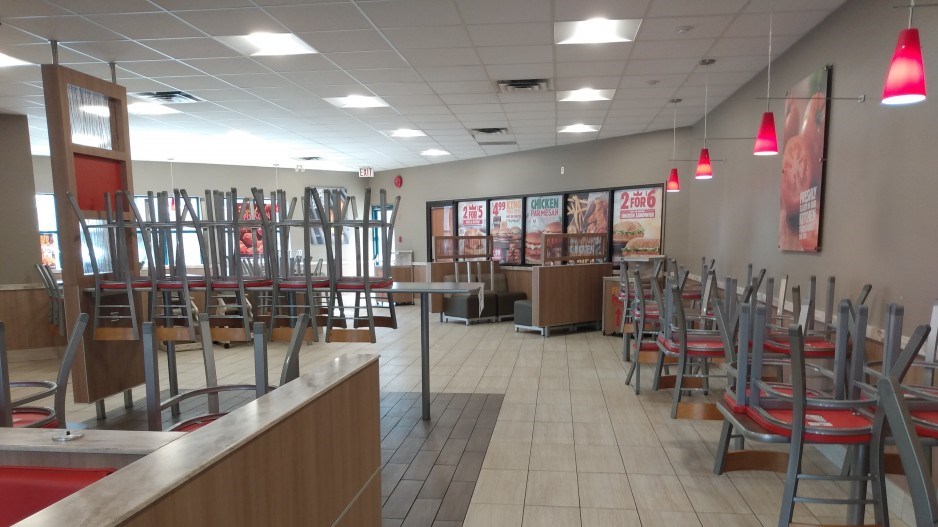 The inside of a Burger King location in New Westminster. The restaurant is open for take-out but dine-in service is temporarily closed. Photo by Hayley Woodin/BIV

What happened: Restaurants Canada estimates B.C. establishments will lose $2.9 billion over the next three months as the industry deal with closures, social-distancing and operational changes to slow the spread of COVID-19.

Why it matters: The industry organization anticipates between 70,000 and 100,000 jobs will be lost in the months ahead.

Tens of thousands of jobs are at stake as B.C.’s restaurant and food service industry struggles with the economic consequences of COVID-19.

Industry advocate Restaurants Canada is anticipating that between 70,000 and 100,000 jobs will be lost in British Columbia over a three-month period beginning last week.

“Our members are very concerned how they’re going to survive the next three months with no sales,” said von Schellwitz.

“It’s been a very, very difficult week,” he said. “I think it’s urgent that the B.C. government step in with additional measures on top of what the federal government has announced to help our members survive the next three months.”

The provincial government is expected to announce some form of economic response plan Monday.

Von Schellwitz told Business in Vancouver that the industry is hoping the province will grant offsale liquor licences to businesses so that they can sell both liquor and food for take-out.

“We have to recognize that for the next few months we’re basically going to be a take-out and delivery industry,” said von Schellwitz.

How B.C.'s wineries have risen to the challenges posed by COVID-19
Jul 12, 2020 9:03 AM
Comments
We welcome your feedback and encourage you to share your thoughts. We ask that you be respectful of others and their points of view, refrain from personal attacks and stay on topic. To learn about our commenting policies and how we moderate, please read our Community Guidelines.