How B.C.'s wineries have risen to the challenges posed by COVID-19

As wineries are slowly re-opening their tasting rooms and restaurants, we take a look back how the industry rose to this most challenging of times
Tim Pawsey
Jul 12, 2020 9:03 AM
Wild Goose general manager Roland Kruger had never seen anything like it. From his home overlooking Highway 97, he watched an endless stream of motor homes heading north in early March. It signalled a much earlier than usual return of snowbirds from warmer climes, one more sign that in just a matter of days everything had changed.

By March 11, the World Health Organization had declared COVID-19 a global pandemic; a week later, on March 17, the British Columbia government called a state of emergency, shuttering non-essential businesses, cancelling travel and encouraging residents to stay at home.

The fallout from COVID-19 had an immediate impact on every area of hospitality, including the province’s wineries, which had little time to react. Like many, Wild Goose curtailed its tasting room to offer only curb-side pickup, but issues arose both inside the winery and out. “Vineyards don’t care about human viruses. They keep growing—and so do the weeds,” Kruger joked. With the borders closing, Wild Goose’s small team of Mexican skilled workers was initially denied entry into Canada. They were eventually cleared, but then the problem became how to get them here. The winery was also in the process of hiring its summer bistro staff, but when it might actually open was anyone’s guess. (It just re-opened on June 25.) Then there was the logistical challenge of physical distancing on the bottling line.

Like others, Kruger took it all in stride. Now, as wineries are slowly re-opening their tasting rooms and restaurants, we take a look back how the industry rose to this most challenging of times.

Okanagan Crush Pad re-opened its tasting room on June 10 with a reservation system in place. Still, co-owner Christine Coletta fears the “short term, devastating impact on the local wine industry, as our core trading partners [restaurants] are shut down.” To reach customers directly, the Okanagan Wine Initiative worked with Kelowna’s Urban Liquor to assemble a mixed case of 50th Parallel, CedarCreek, Haywire, Painted Rock, Poplar Grove and Summerhill wines for consumers. “That way people can share the love around and don’t have to pick one winery to support,” says Coletta, who has also been giving away hand sanitizer made at OCP to elders, cashiers and others in need.

That kind of generosity is part of a pattern that’s seen some wineries (including Township 7 Vineyards & Winery, Rust Wine Co., Corcelettes Estate Winery, Summerhill Pyramid Winery, Poplar Grove and Foxtrot Vineyards) donate partial proceeds of wine sales to charitable organizations such as the BC Hospitality Foundation. Many others offered free shipping or sweetened their deals with gift card “futures” for restaurants.

All over, wineries have come up with an abundance of ways to conduct business almost as normal—in a time that’s certainly not.

“It’s been a bumpy ride, but everyone has banded together and shown leadership,” says Summerhill CEO Ezra Cipes, who closed the dining room and tasting bar for a time (they are now open), but kept the wine shop open for purchases of food, some groceries and wine, delivered right to customers’ cars.

Lillooet’s Fort Berens Estate Winery had to cancel spring release events planned around the province. Instead, says co-owner Rolf de Bruin, “We decided to implement a wine valet service for our wine club members in Vancouver, Whistler, Pemberton and Kamloops [and Lillooet] with a location where were set up with our truck.” Club members texted on arrival, popped their trunk and staff placed their wine safely inside—all the while maintaining appropriate distances.

At Da Silva Vineyards, which initially offered 10 per cent off a case and has now re-opened both its tasting room and restaurant, co-owner Richard da Silva is taking things in stride. “As a farming family, we’ve gone through these cycles over the decades. Lean times is something I grew up with,” he says. “It will be a struggle, but I expect we’ll come through as a solid, more tightly knit community [and] a leaner, more focused industry.

No longer able to offer wine and cheese tastings, Upper Bench Winery and Creamery not only took all their sales online, but offered free shipment across B.C. on any quantity of wine and or cheese. (They have since reopened for purchases, although they are still working out how to do tastings in their small space.) The move “paid off in spades,” says co-owner Gavin Miller, who says some former wine club members re-joined to buy significant quantities. “We’ll likely be doing a whole lot more DTC [direct to consumer] in the future.” Miller remains “cautiously optimistic.”

Around the province wineries have implemented similar programs. Sandra Oldfield, president and CEO of Elysian Projects, points out that, unlike others in tourism, “at least the wine industry still has a product. I know of resorts and golf courses that have completely had to shelve their business until this is over.” But those who “responded quickly with attractive offers, such as free shipping, will definitely be ahead of the game.”

Oldfield, who also founded the Wednesday night Twitter group discussion #BCWineChat, has been putting the weekly meet-up to good use. When the idea surfaced to ask government to allow alcohol with food deliveries, B.C.’s Minister of Agriculture Lana Popham was online and promised to pursue it. The change was already being discussed by key people from BC Restaurant and Foodservices Association, BC Liquor Control and Licensing, and the Import Vintners & Spirits Association (IVSA). Within days the Liquor Act was changed. Even though temporary, it’s arguably the biggest shift in liquor policy since Victoria allowed private wine stores—and a boon for restaurants and wineries alike. 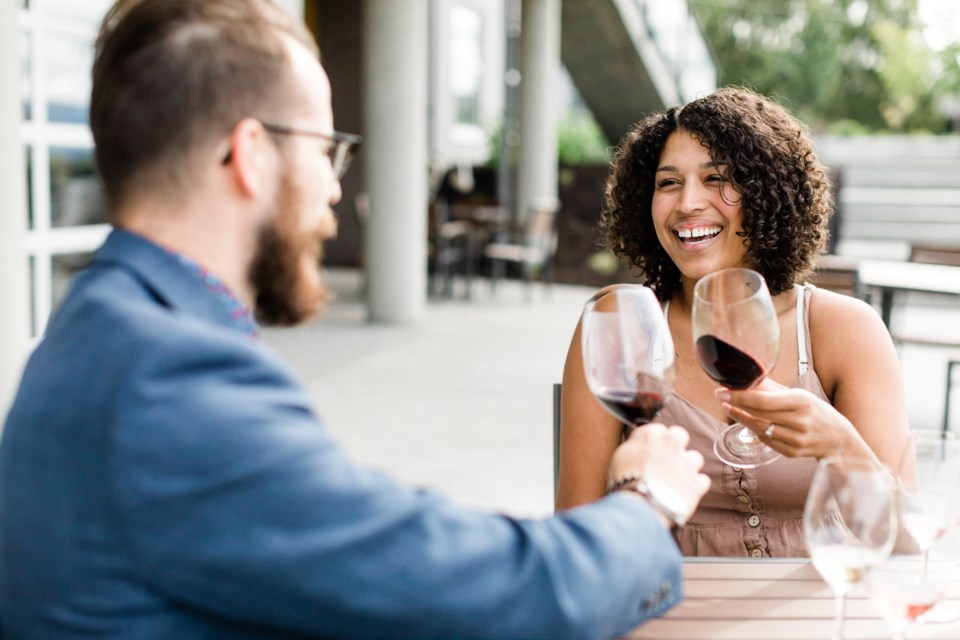 Limited hours, mandatory reservations and social distancing are the new norm at many B.C. wineries. Photo courtesy of Wines of British Columbia, WineBC.com

“We’re just hoping, like everyone else, that this will pass, because a significant amount of our business occurs in summer, from May right through to early November,” says Glenn Fawcett, the “Chief Wine Evangelist” at Black Hills Estate Winery. “At least 25 per cent happens at the cellar door. So if tourists are reluctant to travel, it means really big repercussions. The whole wine tourism dynamic is something that we’re all extremely nervous about.”

The good news? “Because people are hunkered down at home, per capita wine consumption is off the charts,” Fawcett says.

This year, with so many travel restrictions still in place, wineries can expect far fewer visitors from abroad and across Canada, which will devastate winery sales. But they can also expect more visits from British Columbians, who are being encouraged to explore their own province this summer—and to support their growers, producers and makers.

As wineries re-open, the BC Wine Institute has been working with everyone involved to create a plan for navigating COVID-19’s short- and long-term effects.

They consulted closely with the BC Restaurant and Foodservices Association and WorkSafe BC to identify “best practices and protocols specific to the wine industry,” says Laura Kittmer, the BCWI’s communications director. “Out of that discussion, we created and developed a ready-to-reopen toolkit for wineries.”

“We have an amazing community that is looking to support local, wherever and however they can, something crucial to the future success of our industry,” Kittmer adds. “Together, we can keep our industry growing strong.”

To help wineries eager to welcome guests to their tasting rooms and restaurants, the BC Wine Institute has created a toolkit of best practices and protocols for re-opening during the COVID-19 pandemic. “We’ve been working on it for a while. It’s going to be very useful,” says BCWI communications director Laura Kittmer. “We’re going to use that as our go-to.”

Each winery is different, she points out, so there are a variety of options for all circumstances. Some wineries, for instance, are big enough to open their tasting rooms and still accommodate social distancing; others are too small, but have space outdoors that might require permits. “A lot are going to appointment only to avoid lineups and disappointment, just managing that flow,” she says. “Everyone can take what they need from it.”

Visitors should plan to call ahead. Those who work in wineries, meanwhile, can find the “Ready to Re-open Toolkit” online.

The case for Direct to Consumer

If there’s been a common theme at B.C. wineries this year, it’s the switch from “cellar door” sales to direct to consumer (DTC) shipments. In 2012, the advent of direct shipment opened the door for more enterprising wineries to establish wine clubs for that very purpose. In some cases, DTC accounts for 20 per cent of a winery’s sales or more. With COVID-19 shuttering restaurants and tasting rooms, that figure has surely grown and will stay high. The benefits are apparent: consumers get significant price breaks and wine shipped directly to their door. Add to that the lure of library wines or hard-to-find labels and it’s easy to see why DTC may well prove to be the industry’s salvation.

Downtown Vancouver restaurant announces closing: 'COVID pulled the legs out from under us'
Jan 20, 2022 11:53 AM
Comments