West Vancouver’s Beachhouse Restaurant might see some significant renovations that would freshen it up, improve its back-of-house operations, improve accessibility and add parking.
Aug 15, 2018 11:46 AM By: Maria Rantanen

West Vancouver’s  Beachhouse Restaurant might see some significant renovations that would freshen it up, improve its back-of-house operations, improve accessibility and add parking. 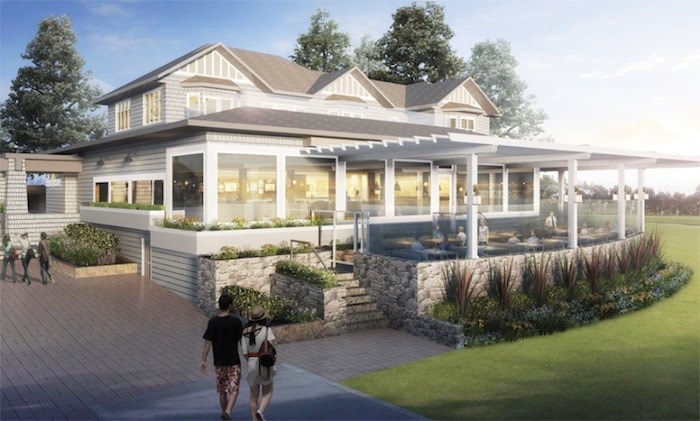 An artist’s rendering shows what the Beachhouse Restaurant on the West Vancouver waterfront would look like if a $5-million renovation goes ahead. Image Supplied

First reading of the restaurant’s renovation application was passed at a recent District of West Vancouver council meeting. The plan is to add 64 square metres of floor space (698 square feet) on two floors that will allow for better public access with an elevator, a ramp and accessible washrooms, and improvements to back-of-house operations. Parking will also increase to 35 from the current seven spots.

The district will kick in $750,000 to the total estimated $5-million cost of renovations. The site where the Beachhouse Restaurant is located is owned by the District of West Vancouver.

The renovations would also allow for upgrades to the kitchen, more storage space, renovations to the dining room, better viewing onto Burrard Inlet with south-facing windows and improvements to the building performance and safety.

The site is currently partially zoned commercial and partially marine (M1) and, if rezoned, the entire zoning will be in compliance with its current use. The rezoning from marine to commercial is for an area that has accreted, that is, the water has gradually retreated creating more landmass, making it a part of the property.

At the West Vancouver council meeting where the application was being dealt with, Coun. Bill Soprovich called the building “nice looking.”

“The applicant through the variances of parking and other things enjoys better years of success than an average restaurant would have to face with parking restrictions and everything else, so I think it’s a plus for the owner,” he said.

The additional space will not be higher than the current roof peak, and there will be no increase in seating capacity of the restaurant, which is at 168 seats, nor will the patio be expanded. However, the umbrellas and awnings will be removed and a pergola with a retractable awning will be constructed.

According to the staff report, the proposed renovations won’t have any impact on the surrounding park or on the businesses north of the railway track.

The building was constructed in 1913 and has had a commercial operation for the more than 100 years of its existence. The application was put in by the current tenant, Earls. According to the staff report, the renovations will help keep the building in commercial use into the future.

Because of the heritage character of the building, the proposal was sent to the Design Review Committee. The staff report notes that the proposed changes won’t take away from the heritage characteristics; on the contrary, it will help to “declutter” it by removing some non-original pieces, for example, the fireplace, awnings, umbrellas and a tent on the second storey.

A public hearing on the application will be held on Sept. 10 at 6 p.m. at West Vancouver municipal hall.