10 beers to try at the Vancouver Craft Beer Week festival

Vancouver Craft Beer Week is back for its 10th annual festival this Saturday and Sunday at the PNE Fairgrounds and this year’s beer lineup promises to be the event's best-ever, with more than 100 breweries and cideries pouring 300-plus delicious adult beverages. 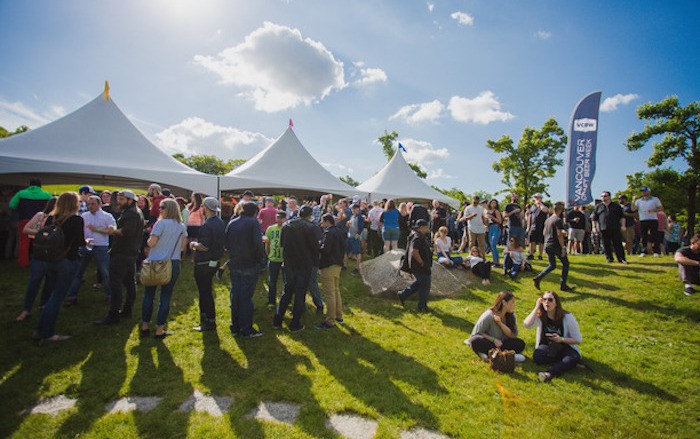 Among the highlights this year is the strong contingent of American breweries. The United States Brewers Association has chosen VCBW as its exclusive Canadian festival partner and will be bringing more than 20 breweries and 40-plus beers, many of which have never been poured in Canada before. Meanwhile, the B.C. Ale Trail-er will be showcasing beers from some of the more remote regions of the province. And even if beer isn’t your thing, there’s Cider Row, presented by the B.C. Farm Crafted Cider Association, with 10 cideries pouring cider-y goodness.

Since there’s no way you’re going to try all 300 beers and ciders (and please don’t try), we’ve narrowed the field to bring you 10 beers to keep an eye out for this year at VCBW.

If you like piña coladas and getting caught in the rain, you’ll love this tropical lacto sour, featuring pineapple and coconut. Winner of a silver medal at the 2018 B.C. Beer Awards.

Normally, a radler is equal parts lager and grapefruit juice, clocking in at around 2-3% ABV. Not Super Rad. This dry-hopped beast is a whopping 7.2% and was blended from a double IPA, with big citrus hop notes to complement the grapefruit juice. It’s also really friggin’ good, so be careful.

One of the originators of the East Coast IPA style with its luscious tropical fruit and citrus flavours, Jai Alai has been on many a beer nerd’s bucket list for the past decade. Well, look no further; this white whale is coming to you!

House of Funk has only been open for a few weeks, but it is putting down some serious beers. Lauma is Belgian-style golden ale fermented with a blend of Westmalle and La Chouffe yeast, then conditioned in an oak foeder with a mixed culture of brettanomyces. Complex, fruity, funky and delicious.

Make sure to swing by Kwantlen Polytechnic University’s brewing diploma program tent and support the brewers of tomorrow. Their 50/50 Hefe recently won gold at the U.S. Open College Beer Championship.

Beach Side by Mount Arrowsmith Brewing

Winner of the B.C. Beer Awards Brewery of the Year honours in 2017, Mount Arrowsmith has quietly been knocking it out of the park up in Parksville. Passion fruit, chamomile and star anise make this witbier a home run.

After all those big IPAs and intense barrel-aged sours, give your palate some relief with a killer lager. Hoyne’s suberbly balanced take on a German Dortmunder-style lager is slightly maltier than a traditional pilsner, and endlessly crushable.

All the way from Wyoming with haze for days, this double IPA is veritable juice box of ripe mango, passionfruit, papaya and pineapple flavors.