Quebec's Eastern Townships, located south of the St. Lawrence and north of the U.S. border, offers visitors a multitude of ways to experience what it has to offer, though no way could be as satisfying as discovery by mouth.
Aug 13, 2019 1:35 PM By: Lindsay William-Ross

Called the Eastern Townships, or, en français, Cantons-de-l'Est, the highway-connected area south of the St. Lawrence and north of the U.S. border offers visitors a multitude of ways to experience what it has to offer, though no way could be as satisfying as discovery by mouth - that is to say, you can get to know the Eastern Townships through its incredible food. 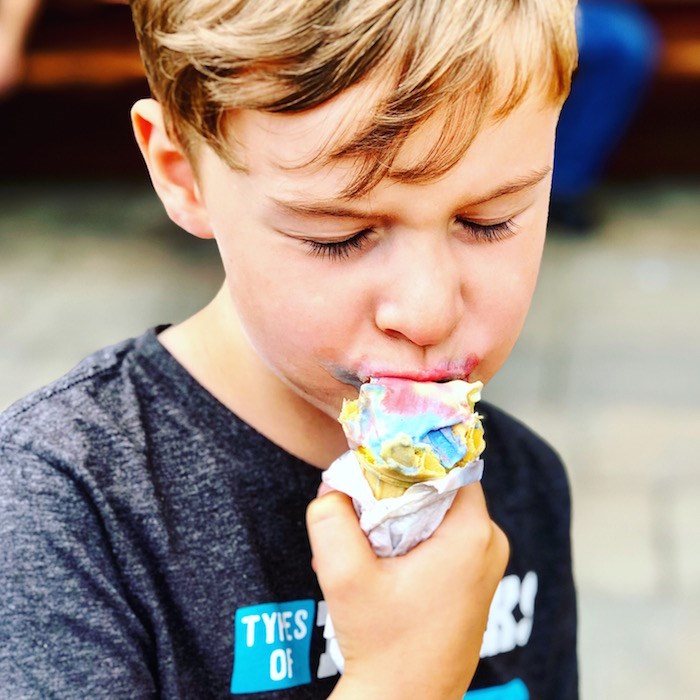 Amazing food in Quebec’s Eastern Townships. Mais oui. This kid – my kid – was a big fan of the ice cream at Laiterie de Coaticook, and with good reason. They make some of the country’s best ice cream. Photo by Lindsay William-Ross/Vancouver Is Awesome

The Eastern Townships are fertile grounds for foodies, thanks to their role in the province's agricultural economy, longstanding devotion to locally-sourced goods, and an understanding of the power of food to speak for a region. It is easy to plan a trip around eating and drinking - in fact, the Cantons-de-l'Est tourism folks have an entire section of their website dedicated to helping you "Taste the Townships," and building an itinerary based around what you love, whether it be beer, cheese, wine, or dining out.

Using Montreal as a starting location, and getting a hold of some wheels (i.e. rental car), a road trip through the Eastern Townships is beyond fruitful for food fans. 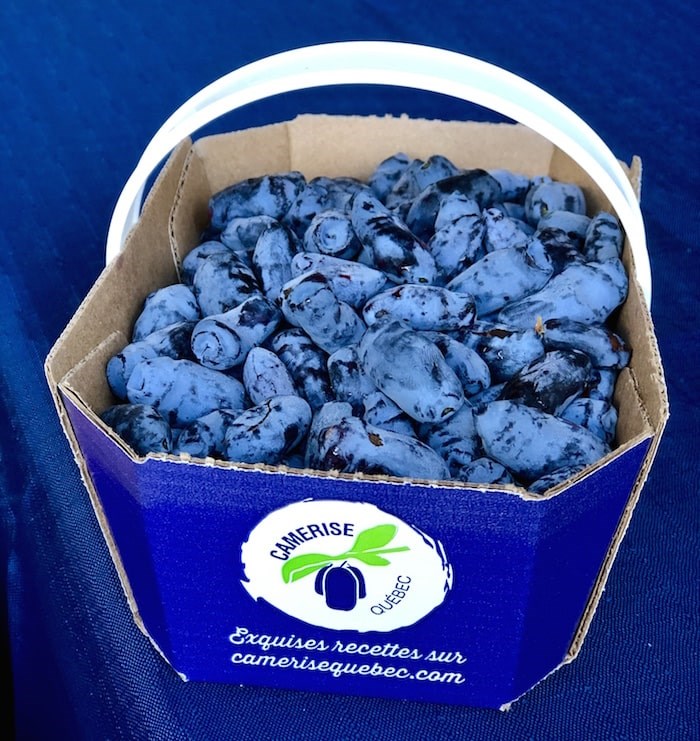 Camerise, or haskap, berries are grown regionally. They are like a more tart, more delicate blueberry. Photo by Lindsay William-Ross/Vancouver Is Awesome

The Eastern Townships are a growing region - as in this is where they grow tons of produce. This is the place to find all sorts of "u-pick" experiences, in particular berries and apples, as well as other lesser-known fruits like the camerise - also known as haskap berries. U-picks are called autocuillete in french. Of course, you don't have to do the labour to reap the benefits - look for local produce and products on menus and in market places. 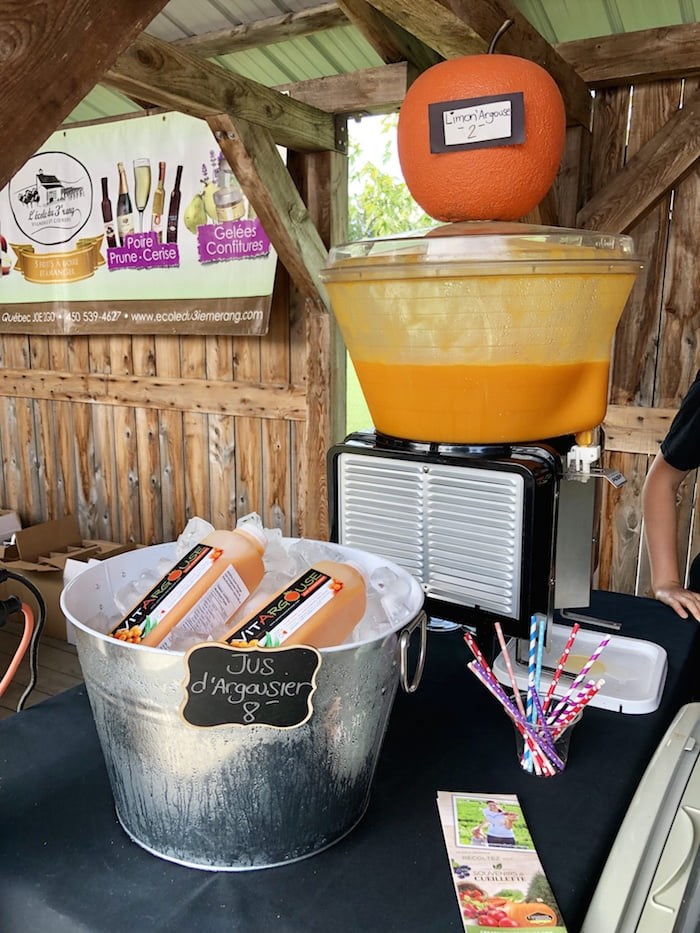 Juice, desserts, and even beauty products made with sea buckthorn – agrousier – are for sale at the Marché Locavore in Racine. Photo by Lindsay William-Ross/Vancouver Is Awesome

One ideal stop is the Marché Locavore de Racine. This weekly semi-outdoor seasonal artisan and farmers marketplace was set up about a decade ago, and is a huge draw. Roam the stalls of permanent and occasional vendors showcasing everything from fresh produce to baked goods, locally-roasted coffee, hand-made pasta, wines and spirits, honey, maple syrup, jams, and more.

Among the treasures at the market include a crepe stand, live entertainment for the kids, and things like elderberry jam, fruit syrups and wines, and drinks and treats (and beauty products) made with sea buckthorn (argousier).

One anchor of the Marché Locavore in Racine is the Fromagerie Nouvelle France. Their permanent shop and cafe is front and centre on site, and features their incredible sheep's milk cheese and yogurt, along with other artisan goods and a casual cafe menu starring sandwiches made with their cheese. 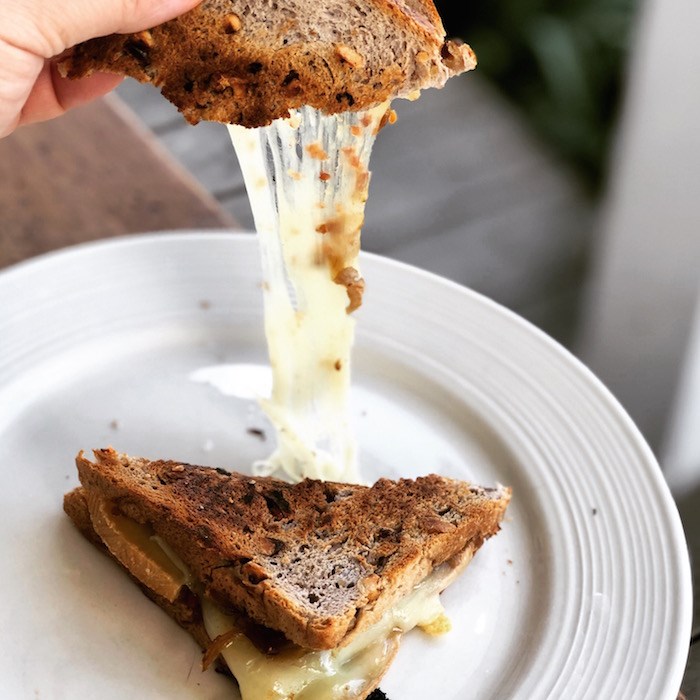 Founder and award-winning head cheesemaker Marie-Chantal Houde is a passionate food crafter who is among the few who work with sheep's milk (lait du brebis). Try the firm, washed-rind signature Zacherie Clouterie, the soft La Madelaine, or get your hands on their rarer "halloumi." Their sheep's milk yogurt comes in plain or maple flavour, and is sold by the jar -- it's worth checking a bag on the airline for, for sure, or for having in your hotel mini-fridge.

Cheese is a huge part of the food-producing in the Eastern Townships, so if you have the need for cheese you can focus your trip entirely on it (their tourism publications and maps, readily available all over the region at hotels and attractions) feature "Cheese Trail"-style passport guide to the Townships, or you can choose your own cheese-venture ahead online. 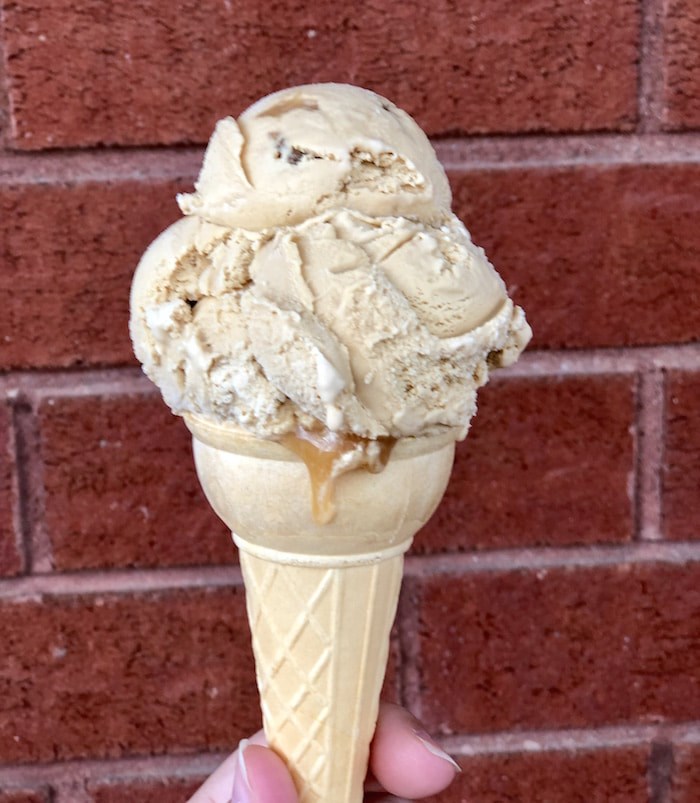 Where there is dairy, there is ice cream, and where everyone goes for ice cream (with good reason) in the region is the Laiterie de Coaticook. You can find their ice cream at some restaurants and vendors in the region, but the mecca is their scoop shop in charming Coaticook, where you'll find dozen upon dozens of their incredible locally-made flavours. The most popular, not surprisingly, is so totally Quebec: it's maple ice cream with crunchy maple bits and a maple ribbon. It's also one of the best ice creams I've ever tasted.

While drinking and a road trip don't pair up safely, if you've got a designated driver or plenty of time between drives and drinks, there is much to discover here. La Route Des Vins (the "Wine Route") can guide you through the region, and open your eyes to what's grown and made here, and it's not just ice wine. 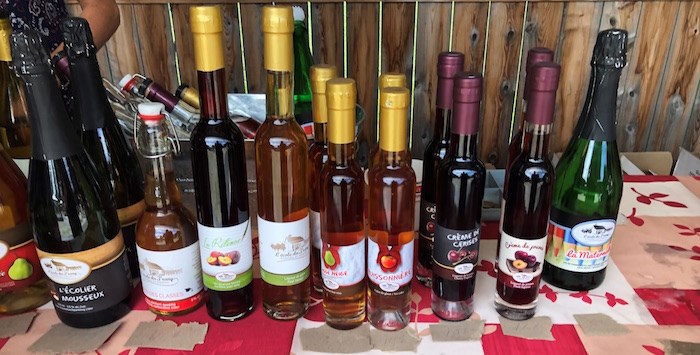 Fruit wines, ciders, and liquers from L’Ecole du 3e Rang, on display at Marché Locavore in Racine. Photo by Lindsay William-Ross/Vancouver Is Awesome

The Eastern Townships is also home to Quebec’s fist microbrewery, Le Lion Pub, was established in Lennoxville back in 1986. Let beer (or cider) be your gateway to getting to know the area through taprooms and pubs showcasing local craft brewers.

Want to get more granular, or at least more grain-based? Micro-distilleries have cropped up in the region. Look for places like Distillerie de la Chaufferie in Granby for gin and vodka, or Distillerie Shefford in Shefford for acerum, a spirit made from maple sap (of course). There's even an absinthe made with locally-grown wormwood - head to Absintherie du Cantons to find out more.

Maple syrup may have come up a few times already - this is Quebec after all. Sugaring season is in winter, however, so that quaint Quebecois "sugar shack" experience is not something you'll find in prime summery road trip weather. Still, keep an eye out for all the maple syrup products you can while you're tasting the Townships.

Lastly, every meal in the Eastern Townships can be an opportunity to taste what they're up to in this part of the province. While the bright yellow signage and grinning chicken of St-Hubert beckons in every bigger town and alongside the highways (they have a great kids' menu, though, if you're so inclined and have kids in tow), you can sit down to some fine meals in the area.

Here are a few restaurant highlights: 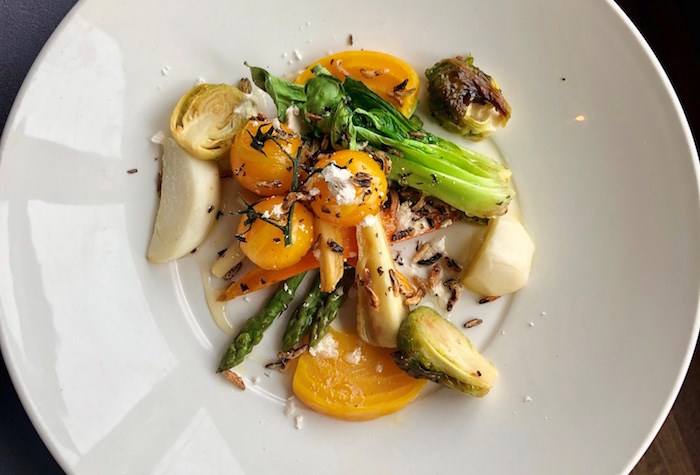 Whether you're a guest or just popping in for dinner, the restaurant at the Chateau Bromont hotel is worth a visit. This gourmet spot offers diners a Table d'Hote dinner option, where you can put together a four-course meal for $53 (with some extras you can add-on). The menu emphasizes seasonal and local ingredients. A dish like the Braised Vegetables appetizer showcases the best of the season, and features hazelnut butter snow, puffed wild rice and cattail hearts with honey, and wild thyme reduction. 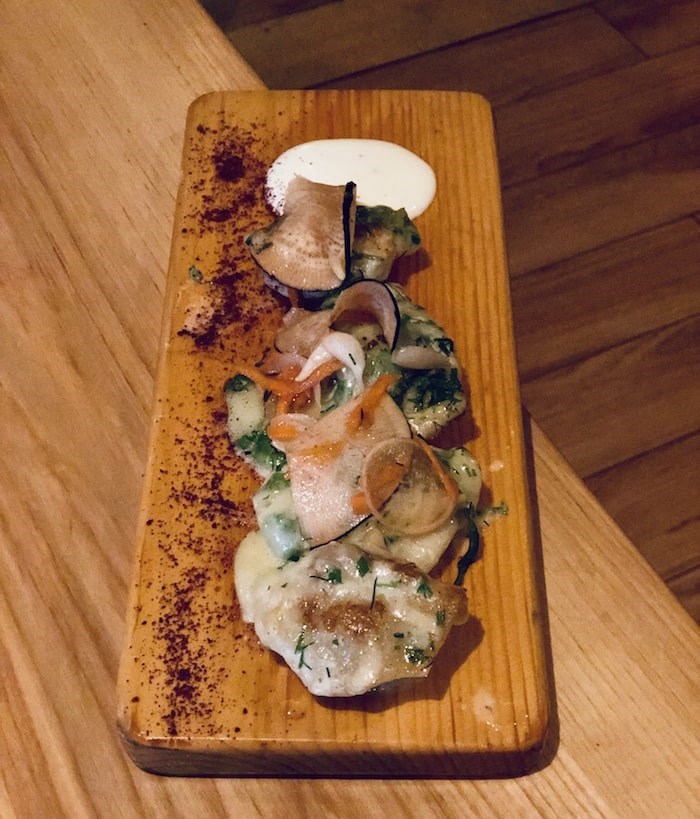 Pierogi at Bistro Kapzak in Granby. Photo by Lindsay William-Ross/Vancouver Is Awesome

Modern Polish-Quebecois cuisine? Yep. You'll want to put Bistro Kapzak in Granby on your must-try list. This charming and intimate eatery features brilliant modern spins on the iconic flavours of Eastern Europe...in the Eastern Townships. Even their kids' menu rocks - the pierogi are sublime no matter what column you choose them from. 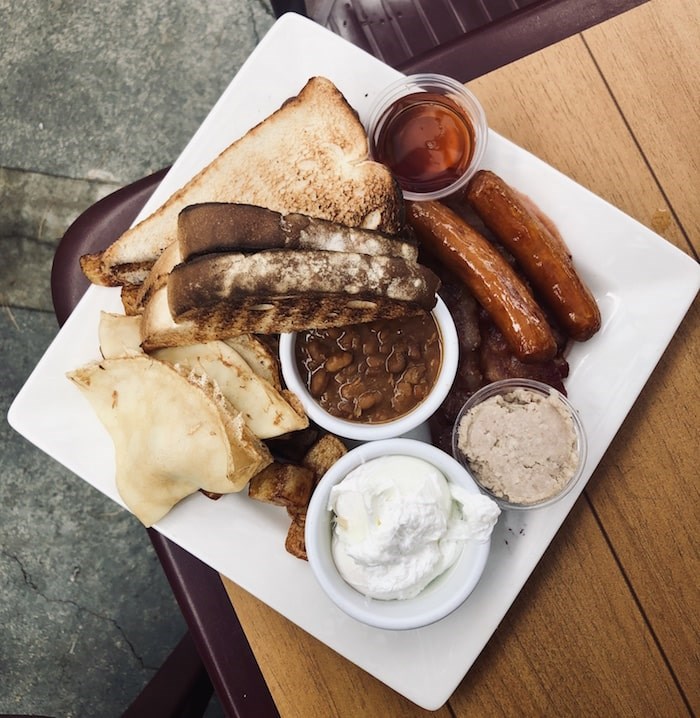 You'll find staples of a Quebecois breakfast at this river-side cafe and coffee roastery in Granby. Want to taste the ultimate Quebec breakfast? Order the epic L'Assiette de la Brulerie - it comes with two eggs any style, bacon, sausage, ham, cretons (a local specialty forcemeat-style pork spread), crepes with syrup, toast, and a pot of baked beans (fevres au lard). Baked beans are a big thing at breakfast; they were at both hotel buffet breakfasts we checked out as part of our stay, too, at Chateau Bromont in the ski resort town of Bromont and the Estrimont Suites & Spa in Canton d'Orford. 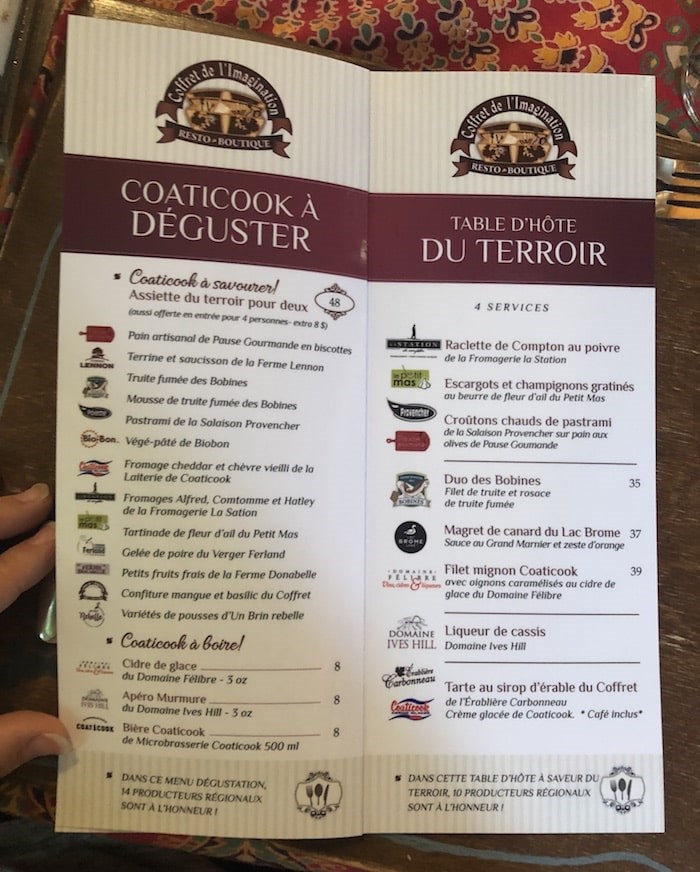 A popular spot in Coaticook, right by the Parc de la Gorge, Le Coffret de l'Imagination is about the Quebecois culinary experience. They make it beautifully simple to zero in on local products, too, thanks to a tasting menu that focuses solely on regional producers, from the fish and cheese to a maple syrup tart and cassis liqueur to finish. 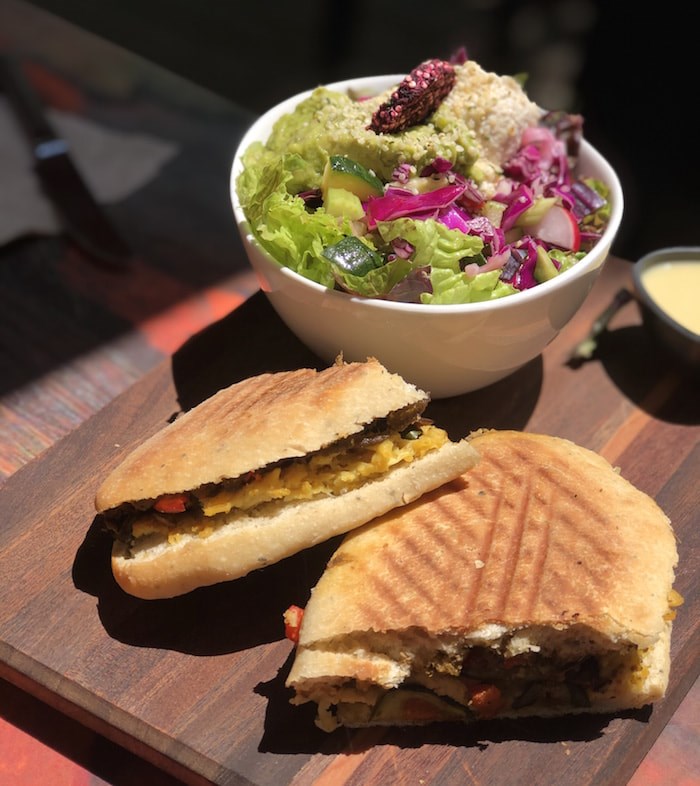 Sandwich and salad at Gaia in Bromont. Photo by Lindsay William-Ross/Vancouver Is Awesome

When you've had your fill of cretons, meaty baked beans, cheese curds, and ice cream, head to this converted house in the absolutely enchanting old town Bromont for Gaia, a vegan restaurant with abundant options. This is where you go for an iced golden mylk made with house-made nut mylk, panini, fresh salads, hearty grain bowls, avocado toast, pastries, and more - all plant-based.

Hungry yet? There's so much more to discover in Cantons de l'Est, with each townships having its own line-up of food places worth putting on your list - farms, bakeries, village cafes, fine dining, charcuterie, even a chocolate museum...Grab your french phrasebook, and get ready to eat and enjoy.

Want to see more of our trip to the Eastern Townships? Check out my Instagram Story Highlights “Cantons de l'Est" for the whole trip in photos.

Thanks to Tourism Eastern Townships and their partners for their assistance with facilitating portions of the this trip. All opinions and inclusions are those of the author’s and were not guided or influenced in any way by the facilitators.