Rare is the business where doing your business is central to the business model. Such is the case at Mount Pleasant’s Anh and Chi restaurant.
0
Aug 14, 2018 2:45 PM By: John Kurucz

Such is the case at Mount Pleasant’s Anh and Chi restaurant. 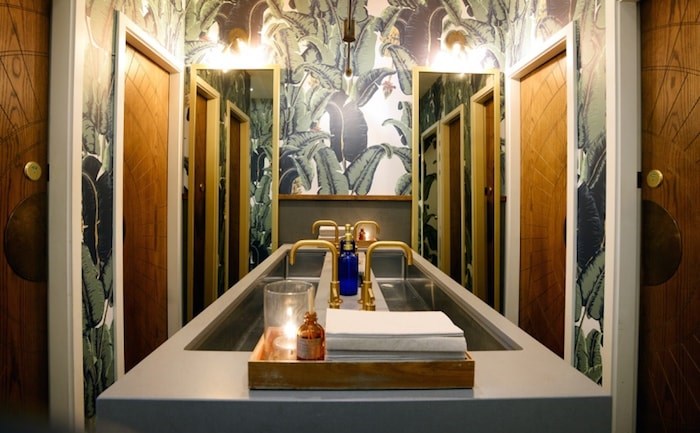 The washroom at Ahn + Chi (Photograph By JENNIFER GAUTHIER)

The hugely popular Vietnamese diner on Main Street and 18th Avenue is in the running for a contest that seeks to crown Canada’s Best Restroom.

Anh and Chi is the lone B.C. eatery named to the final five and voting to crown Canada’s best restroom ends Friday, Aug. 17.

Brother/sister co-owners Vincent and Amelie Nguyen are busy even at the worst of times, but news of their washroom wonderment has upped their clientele to heights previously unseen.

“It doesn’t end with us, we’re busy all day and night,” Vincent said. “But the contest has really helped us spark some conversations.”

Those conversations are about the gender neutrality of the washroom itself. Sure, the building materials are fancy and ornate — Martinique wallpaper, custom-made doors and gold Kohler faucets — but what the room represents is greater than the sum of its parts.

None of the restroom’s stalls have any signs or indications as to who should use what, or where. Having the faucets centrally located forces patrons to look at each other when they’re washing up.

“We’re social beings, we want to be connected with one another,” Amelie said. “Part of that extends to when you go to the washroom, you come out and you’re sharing that intimate space with other people. It offers an opportunity to chat with someone and say hello where normally you would just keep to yourself.”

Vietnamese for “brother and sister,” Anh and Chi has been at its Main Street location since 1983. It was a mom-and-pop shop until Vincent and Amelie took over the reins from their parents in 2015.

Vincent describes the old digs as carpeted, with fish tanks and a tad dated. The restaurant’s menu is comprised solely of recipes from the family patriarch, Ly Nguyen.

“It was nice compared to some of the other restaurants you’d see around 20 years ago,” Vincent said.

The renovation process took almost a year and Vincent dropped out of medical school to have a go at the restaurant business.

“My mom lets me hear about that to this day,” he said. “But you’ve got find what you love to do.”

The refreshed digs opened in April 2016. Including an inclusive washroom was part of the reno plans from the get-go. Neither Nguyen has heard or seen anything in the way of negative feedback to the washroom’s design, though there’s been the odd bit of confusion at times.

“There have been some funny faces where you can tell the person isn’t sure which bathroom they’re supposed to use,” Amelie said. “Some people might not ask, but a lot of people do. We share with them that we want to be an inclusive restaurant and that it matters to us.”

The bathroom ballyhoo is run by Cintas Canada, whose business focuses on washroom supplies, uniforms and cleaning services. The contest winner gets $2,500 worth of facility services.