As both an avid cyclist and beer drinker, I consider myself lucky that the Adanac bike route cuts straight through the foamy heart of the craft beer district, otherwise known as Yeast Vancouver.

You may have a fuzzy recollection that the first brewery to open along the route was Bomber, back in 2014, at 1488 Adanac St. Over the years since, Bomber Brewing had seemingly solidified itself as a successful and popular brand amongst Vancouver’s overflow of breweries. 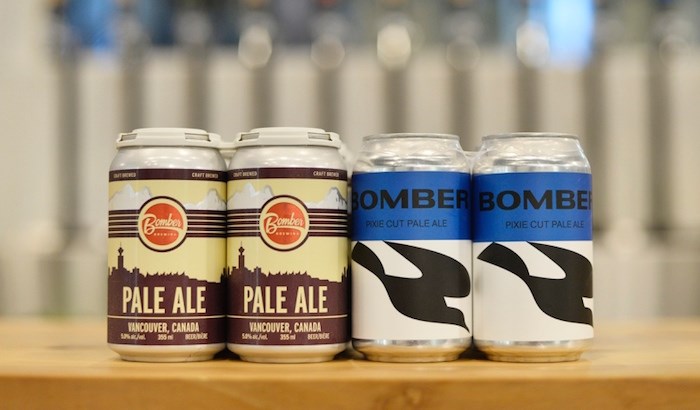 According to several consumer studies, craft beer lovers are becoming more like wine drinkers: they often choose their beer based on its packaging. Bomber’s cans stood out, with a vintage-style logo and a bold, nostalgic design, which focused on our city, mountains, and skyline. You could see their inviting, big red circular logo on their building from blocks away.

That’s why, earlier this spring, I was shocked to see their Adanac headquarters go through a major branding overhaul. Gone was the cool, ’60s-stylized logo, replaced by a basic black block font, and what appears to be a dive-bombing seagull that just spotted discarded pizza crust.

What happened? Why mess with a familiar brand in an exploding craft beer market?

The backstory of Bomber Brewing is one of the best in the beer business. 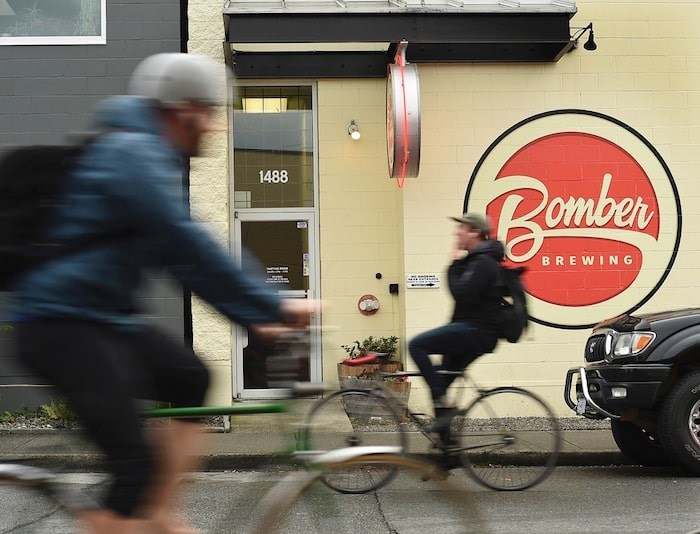 Here’s what the Bomber Brewing headquarters looked like prior to being sold to the Donnelly Group in 2018. Photo by Dan Toulgoet/Vancouver Courier

It all started in an adult men’s hockey team locker room. Or, to be more specific, in the upper parking lot of Mount Seymour Ice Sports in North Vancouver. That’s where the teammates of the Bombers hockey club gather after every game, reviewing the plays and enjoying a cold one.

Most beer league teams are forced to swill Kokanee or Old Milwaukee, but the Bombers were lucky enough to have Blair Calibaba on their roster. Besides being a producer and sound engineer on countless albums by Vancouver bands such as 54-40, Gob, and Spirit of the West, Calibaba is also a brewer. After each game, he supplied the team with his own homebrew.

Another teammate on the Bombers roster is Don Farion, a successful restaurateur who first co-opened Incendio, then BierCraft, both in various locations around Vancouver. Farion was impressed with the consistent quality of Calibaba’s brew.

Finally, in that back upper parking lot, Farion asked the question that would change several teammates lives: “have you guys ever thought about starting your own brewery?”

Within a year and a half, what began as a parking lot tradition had turned into an actual brick and mortar brewery, opening on Feb. 14, 2014, soon after the nearby Parallel 49 and Powell Street Brewing started pouring.

“Back then, it was a really exciting time”, says Andrews. “Without help from Parallel 49, we wouldn’t have opened. It was a great and fairly non-competitive beer community five years ago. Everyone was helping each other out.”

Since Bomber began, several other breweries have opened within stumbling distance, including Off the Rail, Strange Fellows, Strathcona, East Van Brewing, Luppolo, Doan, Andina, and Postmark. 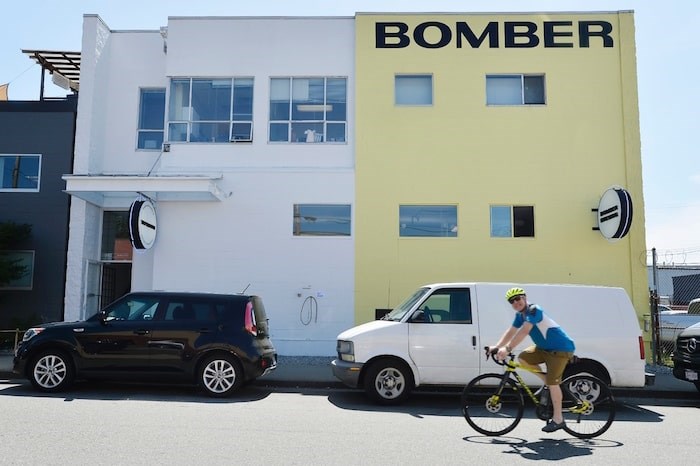 Here’s what the Bomber Brewing building on Adanac looks like now, after the company was purchased by the Donnelly Group in 2018. Photo by Jennifer Gauthier

“By year four, it was getting harder and harder to find tap space in bars”, Andrews explains. “It has definitely gotten a lot more competitive. You have the larger independents buying up tap space in bars now, which is exactly what they used to accuse the majors of.”

As the craft brewing revolution spills out across the continent, a type of brewery sweepstakes has emerged, whereby those larger “majors” buy up the smaller independents. That means your local brewery may not be as indie as you think. According to Andrews, it’s happening in Vancouver.

Bomber Brewing eventually got called up too, though they were drafted by something more akin to a boozy minor league affiliate than the NHL.

In June 2018, while both Andrews and Calibaba were on vacation, Mallel and Farion sold Bomber Brewing to the Donnelly Group, owners of at least 20 businesses in Vancouver, including such revamped rooms as the Railway and the Lamplighter.

Andrews was caught off guard by the sale, but knew Mallel had been dealing with health issues and was reevaluating his priorities in life. The sale still stung.

“If we were going to sell,” says Andrews, “I would have preferred to go with someone bigger than we did. To be honest, I was disappointed with who bought us.”

Andrews then had to inform his hockey team, half of whom were investors in the brewery.

“There was total disappointment on the Bombers,” says Andrews, “but all of our investors got paid out.”

The sale of Bomber Brewing was finalized in September 2018. Calibaba has stayed on as head brewer, as has Farion as operating manager. Andrews and Mallel have both moved on.

On Friday, I stopped in to Bomber for my first time since the rebrand. The revamped and much brighter taproom was jam-packed and noisier than a flock of seagulls.

When I ask Andrews what he thinks of Bomber’s branding overhaul, he offers a blunt “no comment.”

Andrews still works in the beverage industry, plays on the Bombers, and is starting a consulting firm.

“Really, in the end,” Andrews states, “the sale of Bomber Brewing actually worked out great for everyone involved.”

And, Andrews adds with smile, “I was sick of beer festivals anyway.”