Brewer vs. Brewer: The Belgian Edition

What makes Belgian beer so Belgian? Is it the yeast? The acidity? The propensity for strong beers with bold flavours? To find out, we brought together two of B.C.’s preeminent producers of Belgian-style beer.
0
Dec 17, 2018 2:04 PM By: Rob Mangelsdorf

The country of Belgium has long been home to one of the finest beer cultures on Earth. From the Trappist monks and their abbey ales to champagne-like barrel-aged sours, the country has so much more to offer than chocolate, Tintin, tiny green vegetables that smell like farts and that Colin Farrell movie where he karate chops the racist dwarf. And Jean Claude Van Damme. Can't forget about the Muscles from Brussels.

But what makes Belgian beer so Belgian? Is it the yeast? The acidity? The propensity for strong beers with bold flavours? 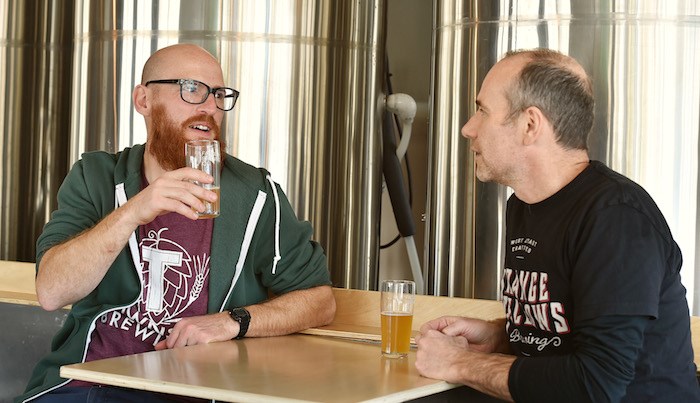 To find out, we brought together two of B.C.’s preeminent producers of Belgian-style beer. Iain Hill is the co-founder of Vancouver’s Strange Fellows Brewing and one of the first brewers in the province to make a proper Belgian beer. Cédric Dauchot is the award-winning brewer/co-owner/biochemical engineer at Townsite Brewing in Powell River, and an honest-to-God Belgian. The two sat down at Faculty Brewing where they were on hand to brew The Growler’s latest B.C. Brewer Collaboration Series release: Poire Blanche, a Belgian witbier made with local pears.

The Growler: Tell me about growing up in Belgium. How did you develop your love for the beer there?

Cedric Dauchot: My neighbour was a beer distributor. So they would fill the truck with cases of beer and on the weekends I would go over with my neighbour’s kids and help put the cases on the truck. At the end of the day, they wouldn’t pay us, but we’d get a little glass of Hoegarden or Belle-Vue.

Growler: How old were you?

Dauchot: I wasn’t drinking, it was mostly… tasting. So I learned how to drive a forklift and put cases on a pallet… 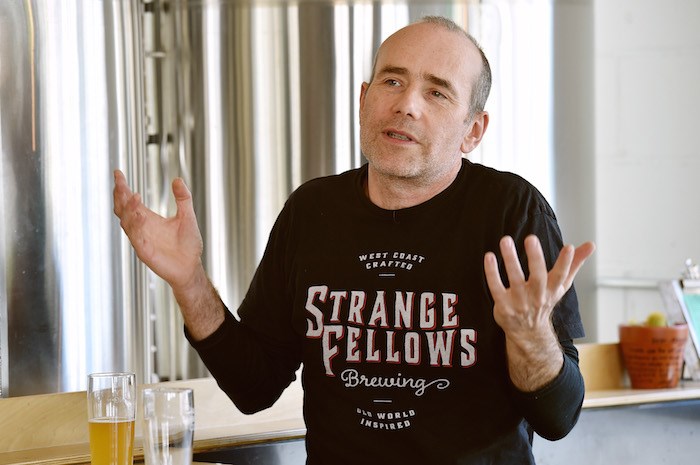 Dauchot: Yes. And then I discovered the science behind the beer. When I was 14 there was a classroom science project, and I asked teacher if I could make it about beer, and he said yes. So I brought beer to class for everyone.

Growler: Wait, you brought beer to school? For everyone to drink?

Growler: What a country!

Dauchot: But I love the science behind beer. I went to school for biochemical engineering, and found out I could do a specialization in beer, so my last two years I specialized in brewing and fermentation.

Growler: What about you Iain? When did you first discover Belgian beer?

Hill: I was homebrewing in university, and I knew it was a thing, Belgian beer was this really important thing. But I had all these incorrect preconceived notions about it—and it’s the same stuff you hear all the time: Belgian beer is strong! Belgian beer has fruit! Belgian beers are sour! But of course, as I discovered, Belgian beer is this tremendously broad category.

Hill: Yes, you could. You could get La Mort Subite, Belle-Vue. There was a time in the ‘90s where you could get Giradin raw lambic, uncarbonated, here in Vancouver. I have no idea why it was here, but I remember I bought it and it was so weird to me, because it was flat. 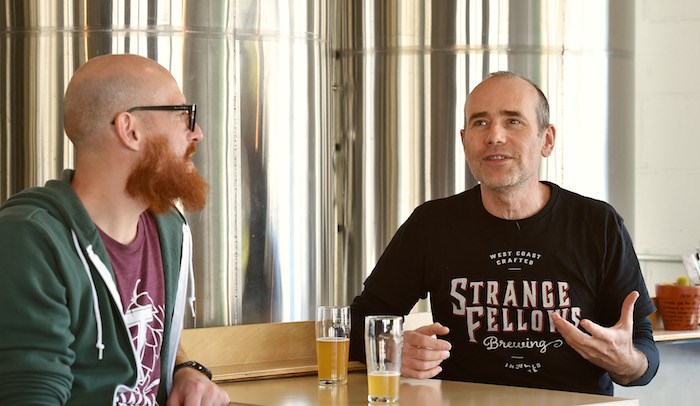 Hill: I don’t know why it was here. But yeah, I was very aware of Belgian beers. Overall, I think my strongest reaction to Belgian beers—besides the fact that it’s this really cool romantic thing—is my background, my biochemistry degree. I’m really interested in cultures, bacteria, yeast, and how can I turn this up.

Growler: What was the first Belgian beer you brewed?

Hill: I was the first brewer at Yaletown [in 1994], and back then there were only a couple Belgian cultures you could get, maybe one or two trappist varieties. In 1997 or ’98, I got my hands on a Brett culture and I did a brown ale and put cherries in it, and I took the beer to the Brewmasters’ Festival at the Plaza of Nations, and I don’t think anyone knew what to make of it.

Dauchot: In Belgium if we want to make homebrew, we would go to the supermarket and look at the dates of every box to find the freshest. It was usually Orval that was freshest, so we would make our homebrew with the dregs.

Growler: So you’d use the sediment to make your yeast starter.

Dauchot: Yeah, we would buy 12 beers and drink them and save the yeast. 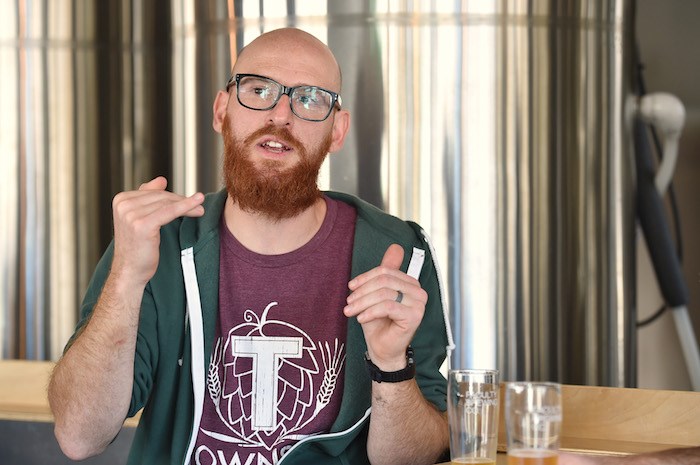 Growler: What do you love about Belgian beer? What makes it unique?

Hill: Belgian beer, as far as beer goes, is the coolest, most interesting beer. And that’s not even a stretch. German brewing culture has its own things going on, but how many styles are there? Compared to Belgian beer, not that many. It’s not even close.

Dauchot: I didn’t realize when I was in Belgium, but now that I’m away, I see there is a tradition of making good beer, but mostly every brewery does its own thing. Germany had restrictions on what breweries could do, but Belgium didn’t have that, other than the size of your mash tun, which led to strong beers.

Growler: In Belgium, they seem to take the best ideas from everywhere. Every time a new technology, a new style or an ingredient presents itself, the Belgians make it their own. Look at pilsner malt, and how that led to blondes and tripels. But it didn’t displace the styles that came before it.

Hill: Didn’t Belgium really get into English porter and stouts at one point? Like in the ‘70s and ‘80s? Do you remember Poirot stout? Is that still around?

Dauchot: Yeah, and you can find scotch ales, they became popular after the Second World War because there were many Scots in Belgium.

Growler: It’s really like this huge mix of styles, but the one constant, like you said is drinking good beer and making good beer, and that specialization that exists with each brewery. You won’t see a Belgian brewery do a blonde, an oud bruin, a stout, and an IPA.

Dauchot: No, that’s something that’s very North American. Breweries in Belgium do one or two beers. In Canada, we have so much freedom. I can do a small batch that will sell in a month and never do it again. I’m really amazed by the opportunities we have and the freedom we have to brew. I have a friend who’s a brewer [in Belgium] who developed a super recipe for an IPA, but he’s still waiting, he says doesn’t know if the market is ready. I told him to just do it. Just make it and sell it. But he’s worried about what that will mean for his branding.

Hill: In that respect, are the breweries very conservative in Europe?

Dauchot: Yes, I think so. There’s 278 breweries in a country that’s very small, so it’s a small market. But I was back in September and there are new breweries opening and they are doing big IPAs, beers in cans. It’s a full circle now. North America is influencing Belgian beer now. I like the fact that Belgium can be influenced like that by different traditions, and make it our own.

Growler: It’s so hard to describe the full spectrum of Belgian beer, but if there’s any commonality amongst the disparate styles, I think it would be bold flavours, but balanced bold flavours.

Growler: You don’t get the subtlety that you would see in a German pilsner, say. That’s not the Belgian palate. 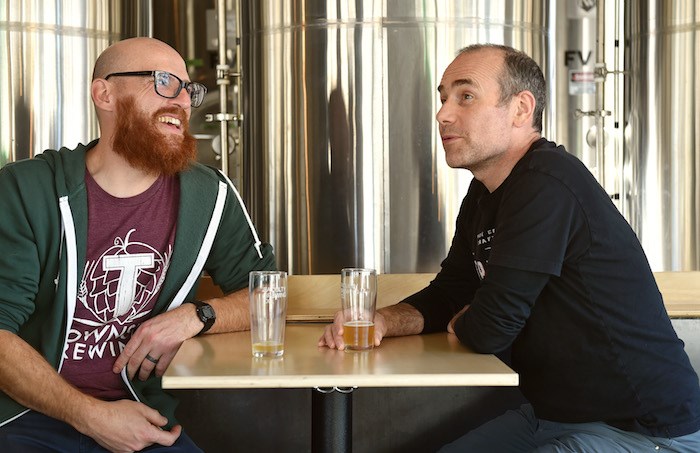 Hill: In North America, it’s all very punk rock, kick the door down, push the boundaries, crank up the volume. IPAs in the ‘90s, or even like 10 years ago, were honestly unbalanced. It was all about how bitter you could make it. Fortunately in the last five years that’s all changed.

Dauchot: It’s the same with sours [in North America].

The Winter 2018 issue of The Growler is out now! You can find B.C.’s favourite craft beer guide at your local brewery, select private liquor stores, and on newsstands across the province. Poire Blanche is available at Strange Fellows and Townsite breweries, in both 650 mL bottles and on draught, as well as at select private liquor stores across the province.