Vancouver's restaurants are plagued with people who flake on their reservations. Now Kitsilano's Cacao is using Tock, a pre-paid booking system, to curb their no-show woes.
Jan 30, 2018 12:05 PM By: Lindsay William-Ross

Chef and restaurateur Jefferson Alvarez remembers a night when Cacao was fully booked, then half of the guests were no shows. When your restaurant has just 40 seats, those kinds of losses take a toll. Now Cacao is using Tock, a pre-paid booking system, to curb their no-show woes.

"We buy what we sell," Alvarez tells Vancouver Is Awesome via telephone. "I rely on my reservations to see what i'm going to buy, what I'm going to make," the chef explains.

Cacao, a progressive Latin restaurant in Vancouver's Kitsilano, is a small operation, and when people blow off their reservations, there's an unfortunate ripple effect on the business.

And we aren't talking people who call the day before to politely cancel. Alvarez says a high percentage of those who ultimately flake the restaurant has called to confirm, and they say, yes, they'll be there.

However, when they don't show up, Cacao has spent money on food they won't get to use, staff who have less to do and fewer tips to bring home, and customers who may have really wanted a table end up rolling the dice as walk-ins or opt to dine elsewhere.

Alternatively, Cacao has experimented with overbooking--a gamble that doesn't pay off ultimately, as often times those are the nights when everyone or nearly everyone shows up, and Alvarez and his staff aren't able to give customers the high quality experience they strive for daily.

Alvarez says he initially heard about Tock from a fellow restaurateur in Seattle. Tock operates differently from a system like OpenTable, and gives businesses three tiers of monthly packages for their services. After month after month of no-shows, including during peak times like Valentine's Day or Dine Out Vancouver, Alvarez says he'd had enough.

Customers looking to book tables for 4 or more people will have to go through Tock. For weeknights, they will pre-pay $30, and for weekends, it's $50. That money goes towards their bill for the evening, but it's non-refundable if you don't show up.

Alvarez likens it to the investment theatre-goers or hockey game ticket-holders make. "If you book a play or hockey tickets, you don't get a refund if you don't show up," adds Alvarez.

Tock, which launched in 2014, is a real innovator in the restaurant business, and counts among its investors and advisors such culinary luminaries as Thomas Keller (French Laundry) and Grant Achatz (Alinea).

Restaurants using Tock are scattered across the U.S., however Cacao is the first Vancouver spot to sign up. (Nourish Kitchen in Victoria is on board with Tock already, too.)

Alvarez says he isn't entirely sure why Vancouverites have a habit of not showing up for dinner reservations, but he knows it's not exclusively a Vancouver problem--which probably explains in large part the growing popularity of a system like Tock. 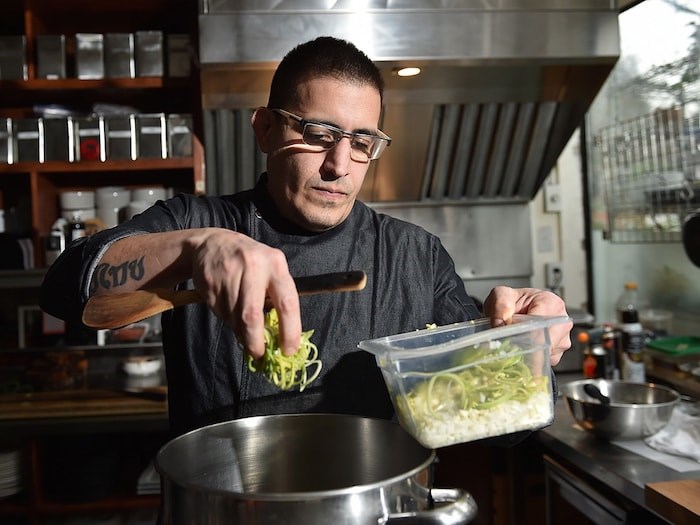 Chef Jefferson Alvarez was half of the culinary team at Cacao in Kitsilano. Photo by Dan Toulgoet/Vancouver Courier

One thing locals tend to do, especially when getting a table is key, like during a holiday season or when there are special events city-wide like Dine Out, is to maximize their options by booking tables at multiple venues, then only showing up to one.

Alvarez knows he's one of many Vancouver restaurateurs who is fed up. "I know there are some [at other restaurants] that are really tired of no-shows."

But will more Vancouver restaurants opt for the pre-paid route, like with Tock? "I'm more than happy to share [with other restaurants] how to get in it. I'll take the first bite," he laughs.

"I think eventually all of the [restaurant] industry will jump on Tock."

Tock is already up and running at Cacao for tables of 4-6 people. Smaller parties can still call the restaurant and make a reservation, and there is always the option to do a walk-in, though Alvarez acknowledges Cacao has been a "reservation restaurant" since they opened.

However, Cacao will close down from February 20 to March 2 while some interior renovations happen at the restaurant, and to allow their kitchen and bar teams time to travel abroad to Peru to immerse themselves in regional Latin American food and drink

Read how Cacao is finding an innovative solution to Vancouver's restaurant staff shortage in the Vancouver Courier.