For their first-ever expansion outside the U.S. and by franchisees, the controversial Atlanta-based fast food brand Chick-fil-A announced Wednesday they will open up locations in 2019 in Toronto.
Jul 25, 2018 11:06 AM By: Lindsay William-Ross

For their first-ever expansion outside the U.S. and by franchisees, the controversial Atlanta-based fast food brand Chick-fil-A announced Wednesday they will open up locations in 2019 in Toronto.

"Let me start by saying we’ve wanted to come to Toronto for a very long time because we believe Toronto is one of the best and most vibrant cities in North America," says Tim Tassopoulos, President and Chief Operating Officer of Chick-fil-A. 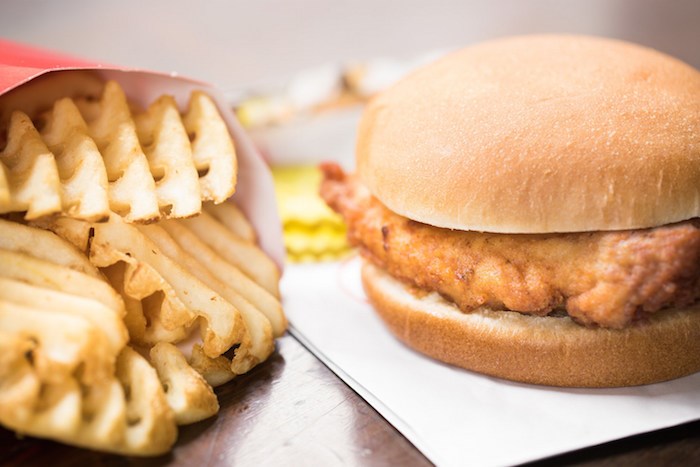 "The decision to invest in Toronto as our first international Chick-fil-A market isn’t one we take lightly. We’ve spent years researching cities across the world, and the more time we spent here, the more we knew Toronto was the perfect place to roost," adds Tassopoulos.

Known for their chicken sandwiches--and some may argue for their religious right-sided politics--Chick-fil-A is a family owned and privately held restaurant company founded in 1967. They currently operate over 2,300 locations in 47 U.S. states. Their location openings often include a free food promo that finds excited chicken sandwich fans camped out overnight for the chance to be one of the first in the door for the grub and the glory.

Speaking of grub, here's what Torontonians get to enjoy come 2019, per the official news release:

"The chicken, which will be Canadian sourced, is 100 per cent whole breast meat, without any fillers, hormones, or additives. Each chicken breast is hand-breaded to order and pressure cooked in 100 per cent refined peanut oil, which is naturally free of trans fat and cholesterol. Other popular items include biscuits made fresh throughout the morning, salads made from fresh vegetables, and fruit that is hand-chopped throughout the day. The lemonade is made from three simple ingredients: lemon juice, sugar, and water."

Chick-fil-A is one of many international chains that has opted to get their toes in the Canadian market by opening in Toronto first. The Philippines' beloved Jollibee first came ashore there earlier this year in the suburb of Scarborough, as did the Japanese cheesecake phenom Uncle Tetsu.

Vancouverites, on the other hand, who may be yearning for southern-style chicken and biscuits (with a dash of homophobia) can continue to get their fix south of our border at one of the many Chick-fil-A locations in the Seattle area. We can also smugly boast that our city and its surrounding communities is often the first Canadian stop for several chains, like the forthcoming Seorae Korean BBQ restaurant launching in Richmond.