Check out this new cookbook lending library at the River Market

Whether you have a favourite cookbook you’d like to share with others or are in need of some new recipes to try at home, the New West Cookbookery may be just what you need.
Theresa McManus
Nov 6, 2018 4:03 PM

Whether you have a favourite cookbook you’d like to share with others or are in need of some new recipes to try at home, the New West Cookbookery may be just what you need. 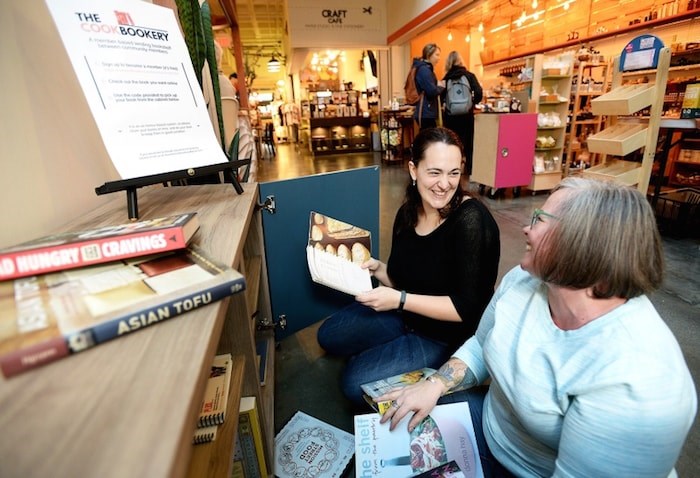 Alice Cavanagh, left, and Jen Arbo chat about recipes at the new Cookbookery at River Market. Residents can borrow cookbooks and share theirs with other community members. Photo by Jennifer Gauthier

A cookbook lending library – the New West Cookbookery – is open for business at River Market. Cookbookery members can place their own cookbooks in the library so they can be loaned out to other community members or they can borrow books without contributing any of their own to the collection.

“It’s meant to be your cookbooks – ones you would like to share with the community. It’s not meant to be a get-rid-of-your-cookbooks here library,” said New West resident Alice Cavanagh. “It’s meant to be a, ‘Hey, I really love this cookbook, here are some great recipes in it, but I’m not really using it right now, maybe somebody else might enjoy it.’”

Local residents Jen Arbo and Erin Jeffery were swapping cookbooks, and approached Alice Cavanagh about expanding the concept to the community. River Market has provided a cupboard and storage for the Cookbookery in a space near to Great Wall Tea.

“It’s ready to go,” said Cavanagh, office manager at River Market. “People sign up online to become a member of the library. When they sign up, they get an access code for the lock. They can open the lock and check out the books, so it’s self-serve.”

Once people sign up to become members of the Cookbookery, they can borrow up to three books for a month, and can check them out again if no one else has placed a hold for those books. Currently, there is no membership fee.

As someone who cooks a family meal almost daily, Cavanagh said she is always looking for new cookbooks to try out. She’s tried out a couple of recipes from a chicken cookbook in the lending library and plans to check out the Suzie’s Sourdough Circus cookbook.

The library is open to taking donations of recent food-focused books that are in excellent condition. Current offerings include: BCTV Cookbook – Someone’s in the Kitchen with Tony Parsons: 120 Recipes from B.C.s’ Best Known TV Chefs and Celebrities; Italian Cooking School: Vegetables; and Nigella Bites.

“So far we have got 25 books. We have a range of speciality items. We have a cookbook that’s The Tofu Cookbook, which is all about tofu. Then we have great community cookbooks like In the Kitchen with Tony Parsons, which is a very community-based kind of cookbook. We have three Company’s Coming cookbooks,” Cavanagh said. “We would love to see the stock get built up. I think we would love to see 50 to 100 books in there.”

People can donate books to the Cookbookery permanently, and they become part of its permanent collection, or for a while if they’re not currently using them.

While the Cookbookery is only for food- and beverage-focused books, it’s possible other bookeries could pop up around town in the future.

“I think that’s the goal,” Cavanagh said. “It would be really neat to have location-specific community libraries. It has been talked about doing an art bookery in an arts place. A lot of people have beautiful art books, but again, they only get read once every couple of years but would be great to share. We are going to try it out with the Cookbookery and see how it goes.”

A Metallica-inspired whiskey is now available in Vancouver
Dec 8, 2021 9:42 AM