The fault in our beers: diagnosing off-flavours for dummies

Off-flavours are a scourge that affects every style of beer, and without sensory training, it can be difficult to find the words to adequately describe why you’re blubbering into your pint.
0
Feb 15, 2019 12:39 PM By: Rob Mangelsdorf

Ever had a beer that was just, well...off? When good beer goes bad, it can feel like a tragedy. Off-flavours are a scourge that affects every style of beer, and without sensory training, it can be difficult to find the words to adequately describe why you’re blubbering into your pint.

Being able to recognize and diagnose common off-flavours is extremely important for brewers and craft connoisseurs (read: “beer nerds”) alike. Sensory training is training, or perhaps retraining, your palate and other senses to critically evaluate beer, recognize certain flavours, and pinpoint what may have caused these flaws. 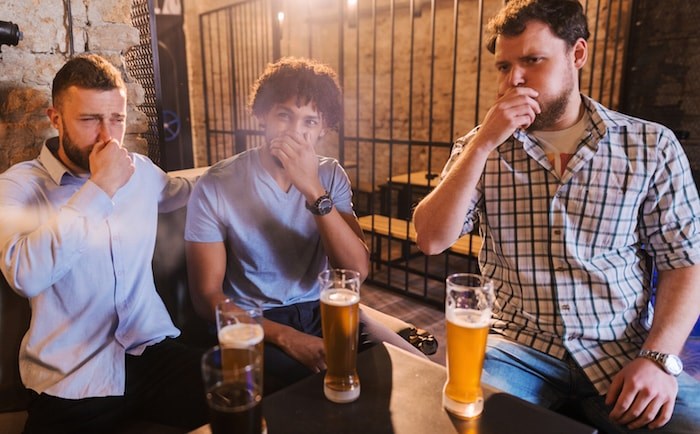 What’s wrong with this beer? (Photo via iStock)

Unfortunately, the best way to learn is to experience these flavours for yourself…but, dear reader, I wouldn’t subject you to that! So, alternatively, here’s an abbreviated cheat sheet with much less science-y technical jargon that’ll have you sounding like a Cicerone in no time.

Tastes/Smells Like: Green or rotten apples, or, oddly enough, freshly cut pumpkin; not to be confused with “pumpkin spice” which, in my opinion, also has no place in beer.

Likely Culprit: Acetaldehyde is naturally produced by yeast during fermentation. Over time, the chemical is converted into ethanol alcohol. This process can take longer in higher alcohol beers or if not enough yeast has been used. So, if you taste green apples in your beer, it’s probably best to give the poor yeast a little more time to work.

Tastes/Smells Like: Overpowering alcohol, paint thinner (yum!), or acetone (think nail polish remover). This is definitely one that’ll put hair on your chest!

Likely Culprit: Fusel alcohols; basically things with names that sound like they are what gasoline is comprised of. These alcohols are caused by fermentation occurring at too high of a temperature.

Tastes/Smells Like: Sucking on a teabag, essentially. If astringency is present, you get a dry kind of puckering mouthfeel and may taste tannins just as you would from the teabag. Go ahead, try. I’ll wait.

Likely Culprit: Astringency has a variety of causes including tannins found on the husks of grain or skins of fruit steeping over milled grain for too long and over-hopping.

Likely Culprit: Chlorinated water or sanitizer. It may seem crazy, but using tap water to brew or rinse equipment can negatively influence the flavour of beer. Filtered water is king.

Tastes/ Smells Like: Butter, rancid butter, or butterscotch complete with a slick mouthfeel. If this is what they meant by “Butterbeer” in Harry Potter, then childhood me is seriously disappointed.

Likely Culprit: Yeast (hot tip: it’s always the yeast). Diacetyl is naturally produced by all yeast during fermentation and is then reabsorbed. If not, it’s likely the result of weak or mutated yeast or low fermentation temperature.

Tastes/ Smells Like: Cooked vegetables, especially corn, cabbage, tomato and sometimes even shellfish; none of which you want in your beer.

Likely Culprit: Under-boiling or infection. DMS is essentially a by-product of the malting process and is created whenever wort is heated. It typically evaporates when that wort is boiled.

Likely Culprit: This one is a bit tricky. Esters are naturally produced by yeast during fermentation. Sometimes those lovely naturally occurring fruit flavours are even supposed to be there, such as in a hefeweizen—but in a lager? Not so much.

Likely Culprit: Mouldy ingredients are usually at fault here. Always be sure to check for freshness before brewing!

Tastes/ Smells Like: Iron, pennies or blood—you’ll feel this one on your teeth.

Likely Culprit: This is caused by beer or ingredients coming into contact with unprocessed metals, or in packaging via bottle caps or kegs.

Likely Culprit: Before sensory training I never once thought, “I wonder what wet cardboard tastes like?” Now it haunts my dreams. Oxidization occurs when too much oxygen has been introduced to the beer especially while the wort is still warm or after fermentation is complete. It can also occur from too much headspace in bottles.

Likely Culprit: Light. Beer skunks when hops are exposed to UV light and react with the yeast. Science, science, science, this reaction creates Mercaptan—literally the same chemical skunks secrete when they spray.

Likely Culprit: This chemical is naturally produced by all yeast during fermentation. CO2 carries most of it away during conditioning or lagering.

Likely Culprit: The yeast clocked out early. What did I say? It’s always the yeast.