Impossible? Yes: You can get DIY vegan smashburger kits in Vancouver

A vegan smashburger kit for making loaded plant-based burgers at home in Vancouver might sound impossible, and, you'd be right, it is. That's because the new DIY burger kit biz Burgerland Smash Up is set to offer the fully plant-based Impossible Burger and vegan/vegetarian line-up of you cook 'em yourself smashburger sets.

Burgerland Smash Up was launched this spring by local burger lover Bodhi Valentine, whose life-long adoration of burgers led him to come up with the perfect bundles for sizzling up perfectly crispy-juicy smashed beef patties paired up with toppings inspired by burger classics.

Now Burgerland has added a new option for fans of smashburgers who also happen to be fans of keeping an animal-free diet.

“I tested a lot of plant-based options but was absolutely blown away by how the Impossible™ plant-based protein looks, cooks, and tastes — and smashburger lovers of all stripes will be, too,” said Valentine in a media release. “It has to be experienced to be believed. It's our mission at Burgerland to help everyone make better burgers, whether you want to eat less meat or no meat whatsoever.”

Starting Wednesday, June 30 you can order all four of Burgerland's current Smashburger kits with Impossible Burger "smashballs" with either the regular toppings and components (like "secret sauce," American cheese slices, and Martin's Famous potato rolls in the In-N-Out inspired California Up-N-Down) or totally plant-based toppings and components (like a vegan "secret sauce," Chao slices, and La Baguette buns for the same kit). 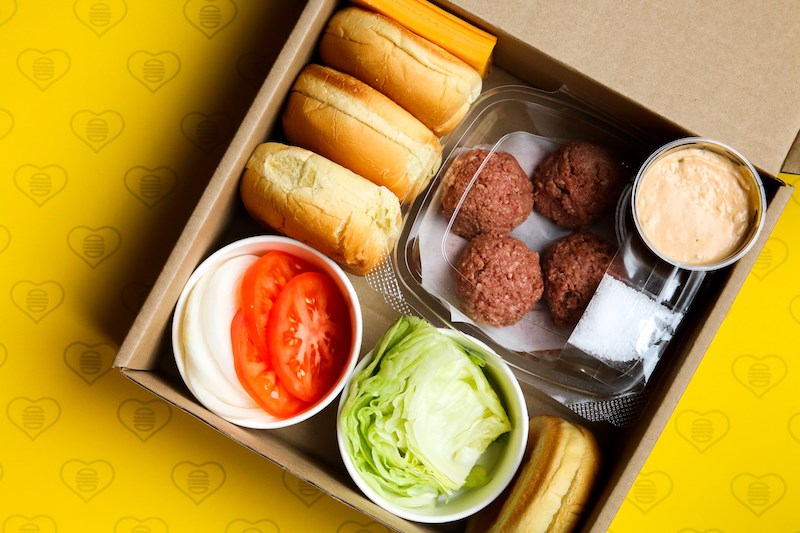 The Up-N-Down is a smashburger kit inspired by a famous Californian burger chain's signature burger. You can now get it with Impossible burger smashballs and plant-based toppings. By Photo courtesy Burgerland Smash Up

In addition to the "California Up-N-Down," Burgerland's kits are the "Classic American Cheese," "Oklahoma Fried Onion," and the "Big Smash" (inspired by a certain fast-food chain's iconic double burger). All the kits contain what you need to make four burgers (though you supply the "smash" muscle and the pan or griddle) and cost $39.99.

Pick up or delivery in Vancouver is available.