The pub inside the Marine Building has been taken over by the Donnelly Group, who are planning to launch a to-be-revealed concept in the space. 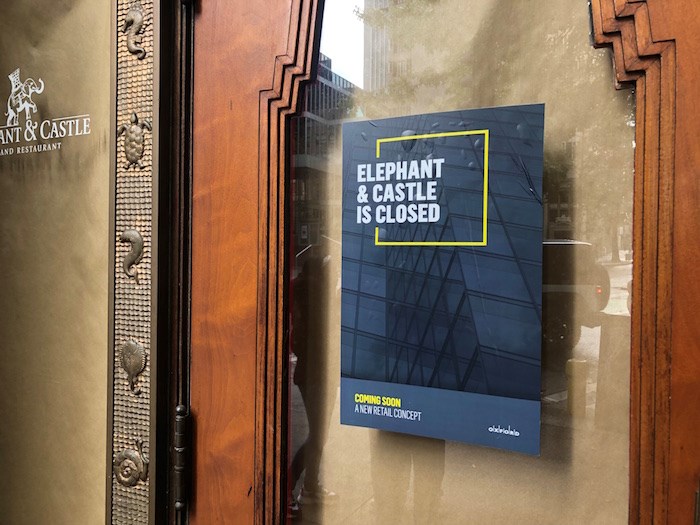 The Elephant & Castle Pub in the Marine Building in Vancouver has closed and the Donnelly Group has taken over the space for a to-be-revealed new concept. Photo by Lindsay William-Ross/Vancouver Is Awesome

Pour one out for Elephant & Castle, and get ready to raise your glass to a new era of pubbing in Vancouver's historic Marine Building.

The pub on the corner of Hastings and Burrard inside the heritage building (that was once the tallest in Vancouver) has been taken over by the Donnelly Group, who are planning to launch a to-be-revealed concept in the space.

Well-known operators of contemporary pub-restaurants across the city, Donnelly Group has a few heritage spaces in their portfolio they've renovated and reinvented, such as The Lamplighter in Gastown and its neighbour Clough Club as well the Railway Stage in downtown.

Additionally, says a rep, the Donnelly Group's recent projects in Toronto are helping inform their process on their latest Vancouver endeavour.

Most recently, Donnelly took over the former Winking Judge space to create the Ballyhoo Public House. They've also branched out into the cannabis sector with their 'Hobo' brand.

"Donnelly Group is energized in its opportunity to take on the Marine Building ground floor space as a new Vancouver food and beverage destination. The group's interior design team aim to bring new life to the room while keeping its iconic and historic spirit intact," says a statement from the company.

Renovations are already underway at the ex-Elephant & Castle spot, and the new name and opening timeline will be revealed soon.

The new Donnelly Group project is located at 385 Burrard Street in the Marine Building in downtown Vancouver.