Photo: The Growler I think we can all agree that Hot Tub Time Machine is among the finest films to have ever been committed to the big screen.
Feb 23, 2018 10:18 AM By: Rob Mangelsdorf 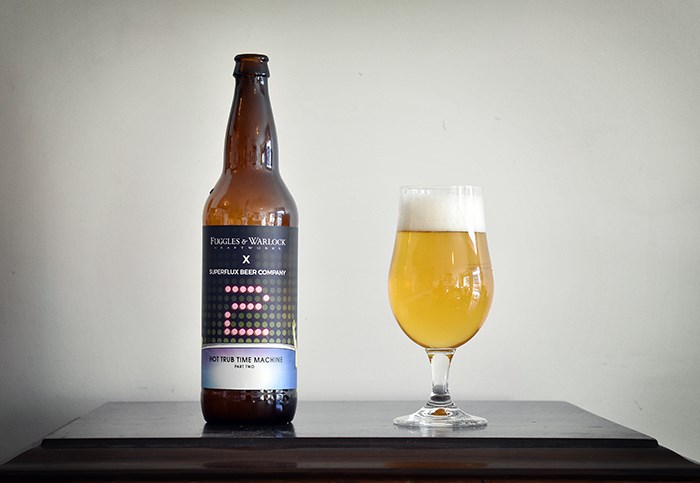 I think we can all agree that Hot Tub Time Machine is among the finest films to have ever been committed to the big screen. Between John Cusack’s charmingly angsty anti-hero, Craig Robinson’s smooth jams and 90 solid minutes of dick jokes, it’s pretty much the perfect comedy recipe. It was also largely shot in Vancouver and Fernie, so bonus points there.

The John Cusack-less sequel, though? About as appealing as a colonoscopy.

Thankfully, unlike its namesake, Fuggles & Warlock Craftworks’s Hot Trub Time Machine Part Two might be better than the original.

(FYI, “trub” is the name for all the gunky hop debris and protein that settles out of beer during the brewing process, in case you wondering.)

Fuggles & Warlock took their original recipe for IPA success (first released back in 2016) and changed up a few things for Part Two. Instead of going solo, they brought Superflux Beer Company on board to co-star in this collaboration, and replaced the Mosaic and Galaxy hops with somewhat more obscure Denali and Vic Secret. But the winning formula is still very much intact.

The result is a juicy, fruity hop bomb clocking in at 61 IBUs and 6.9% ABV. Both the Denali and Vic Secret hops are big on tropical fruit, as well as dank, piney notes, giving this beer an interesting balance of flavours. Meanwhile, the malt character is pretty light, so there’s nothing getting in the way of those big, hoppy flavours. If you love big juicy hops, you will probably love this beer.

Like all good sequels, Hot Trub Time Machine Part Two pushes the story forward with the same successful framework as the original, but with enough new flavour to keep it fresh and interesting. Definitely deserving of a trilogy.

Body: Light-bodied, refreshing, with a dry, hoppy bite to finish.