Burnaby now has even more fried chicken options than ever. Popeyes has officially opened its Louisiana-style chicken restaurant in Burnaby at 7855 Kingway right near 10th Avenue on the border with New Westminster.
Jun 13, 2021 8:39 AM By: Chris Campbell 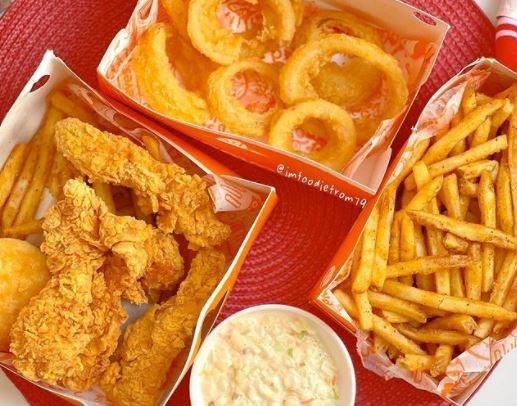 Fried chicken chain Popeyes has opened another Metro Vancouver location, this one at 7855 Kingsway in Burnaby in a part of down so packed with fried chicken spots is should be renamed 'Chicken Way'Popeyes Instagram

Burnaby now has even more fried chicken options than ever.

Popeyes has officially opened its Louisiana-style chicken restaurant in Burnaby at 7855 Kingway right near 10th Avenue on the border with New Westminster.

This is good news for chicken lovers on the southeastern side of the city.

For southwestern Burnaby residents, there’s an intersection that should probably be renamed “Chicken Way” because of all the chicken joints that are now open there.

It’s at Kingsway and Wilson in the Metrotown/Patterson area that already has a Nando’s restaurant, a 24-hour Hi-Five fried chicken outlet and the Hi Chicken Pot.

But apparently that isn’t enough chicken for one neighbourhood.

A fried chicken venture that found its wings (and legs) this year at its original Richmond location has now opened on Kingsway to face off with these other restaurants.

Chirpyhut Fried Chicken is known for its crispy fried chicken, available in pieces or as a whole fried chicken.

But Chirpyhut's most Insta-famous menu item by far is the black chicken wings, aka Meteorite Wings.

How do they do it? They use a well-loved culinary tool: squid ink.

Along with their popular chicken offerings, Chirpyhut serves up sides like thick-cut fried potato wedges, and chicken sandwiches - some even available on a black squid ink bun.

OK, you had me at squid ink, an underrated ingredient that makes most foods better (try the squid ink waffles at La Foret – they are to die for).

Hi-Five chicken is also fantastic. Deep, rich flavour and crunch without all the grease of other fried chicken places.

And then, of course, there’s Nando’s – home of flame-grilled chicken and peri-peri goodness.

This intersection is now the official chicken hot spot of Burnaby.

North Burnaby has Church's chicken on Lougheed in Brentwood and the new Korean-style Pelicana next to Red Robin around the Lougheed Town Centre mall area.

- With additional reporting by Lindsay William-Ross, Vancouver is Awesome

After 41 years, an iconic Vancouver restaurant will close to undergo a total transformation and rebrand
Jul 29, 2021 9:32 AM