“Vancouver Island’s Original Lucky Lager” the boxes proclaimed, next to an illustration of a man in waders hauling in a giant tyee salmon.
Mar 21, 2019 5:55 PM By: Rob Mangelsdorf 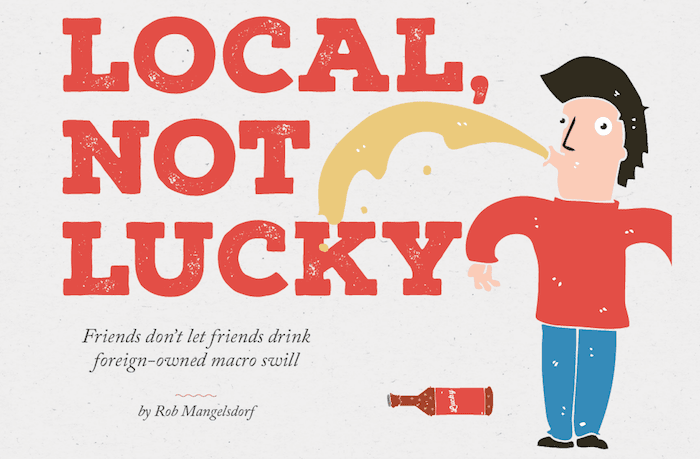 I recently moved back to Vancouver Island and I was reminded of a certain geographic peculiarity upon my first trip to the liquor store.

There, right as I walked into the store, was a six-foot high pyramid of familiar red and white cartons of beer.

“Vancouver Island’s Original Lucky Lager” the boxes proclaimed, next to an illustration of a man in waders hauling in a giant tyee salmon. For the unfamiliar, this is a ubiquitous sight on Vancouver Island. In just about every fridge, the back of every pickup truck, and the bottom of every roadside ditch, you will find cans of Lucky Lager. It’s as Vancouver Island as Nanaimo bars and driving 10 km/h under the speed limit.

The thing is, though, there isn’t anything remotely Vancouver Island about it, except the marketing.

Lucky Lager is an American beer brand that began in San Francisco and made its way north in the 1950s with itinerant American loggers who came to work the summers in the B.C. forestry industry, and it caught on with the locals. Labatt Brewing soon bought the brand, and even briefly brewed it on Vancouver Island until it closed its Victoria brewery in 1982.

Today, Lucky Lager is part of the AB InBev global beverage juggernaut, and brewed in Edmonton, Alberta—more than 1,200 km away from Vancouver Island.

There is nothing remotely Vancouver Island about this beer: not its owners, its makers, or even its ingredients. Yet the locals claim it as their own.

Other areas of B.C. also have questionable loyalty to foreign-owned beers. On a recent trip to Northern B.C., I was surprised to discover that the “utility beer” of choice was not Cariboo Brewing’s Blonde Ale—which actually won silver at the 2017 B.C. Beer Awards and is brewed in Prince George by hardworking British Columbians using local ingredients—but instead, Budweiser.

This trend is especially disappointing when you consider how much amazing beer is getting made locally, all over the province.

If you’re from the Island (or Northern B.C., or anywhere, really), I challenge you to switch to a local brand of beer. If you like inexpensive lagers, that’s fine, there are plenty of local examples these days. There was a time, not too long ago, when craft breweries shied away from inexpensive light lagers that might face competition from the big bad macro breweries. In reality, they are actually incredibly technical and expensive beers to brew. But today, pretty much every brewery in the province has at least one lager even your old man can get into. And should.

There’s nothing wrong with drinking foreign beer, per se. Some of the best beer in the world is made in places not called British Columbia. But Lucky Lager and other foreign-owned macro garbage aren’t among them. You have options.

By drinking local beer, you’re supporting your own community. You’re not only supporting the local brewery and the people who work there, but the local businesses it contracts and the local suppliers it relies on. You’re supporting everyone from local farmers to truck drivers, you name it. These are your neighbours, your family and your friends. You’re a goddamn hero, really.

But chances are, if you’re reading this, I’m already preaching to the converted. So let’s all do our part to spread the gospel of local beer. The next time you see your buddy, or uncle or Sharon from accounting cracking into can of foreign-owned and -brewed macro swill, sit them down and tell them their choices are offensive and wrong.

I’m kidding, obviously. Don’t do that. But maybe ask them: “If I could find you a beer that tastes just as good as what you’re drinking for about the same price, but it was locally owned, locally brewed with local ingredients, and your money stayed right here in our community, would you drink it?”

The answer will be yes.

It bloody well should be, anyways. If it’s not, you don’t need those people in your life.