How the Squamish Nation entrepreneur has cooked up ways to keep going despite the pandemic
Aug 18, 2020 2:32 PM By: Martha Perkins 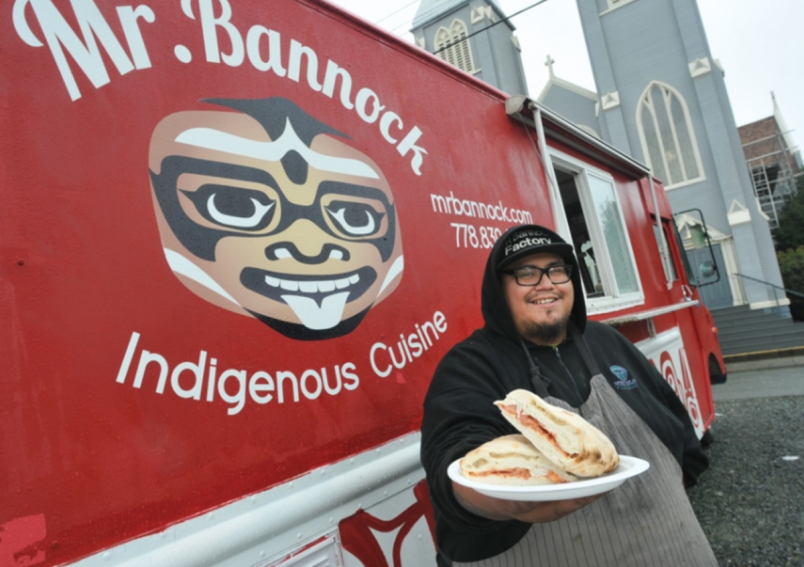 Before the pandemic hit, Paul Natrall's food truck and catering business were promising to break new records. He's spent the past few months finding creative ways to cope with the drop in business. Photo by Paul McGrath/North Shore News

Paul Natrall knows what it’s like to be poor. Very poor.

So when the novel coronavirus threatened his young family’s economic existence, he knew he couldn’t let the pandemic take away everything he’s worked so hard to achieve.

“My father died when I was 11,” says the owner of the Mr. Bannock food truck and catering business. “We went without a lot of stuff when I was growing up. Then, when I was a single father for a few years with five kids, it was really challenging, especially after I got evicted from my home.

“I had some really hard times. I definitely don’t want to go through that lifestyle again and I don’t want my kids to, either. So I’m going to bust my butt off to make sure I don’t.”

Natrall, who is a member of Squamish First Nation, started his business in 2017 after training in French cuisine at Vancouver Community College. By the fall of 2019, he was basking in being chosen as Young Entrepreneur of the Year in the BC Indigenous Business Awards. Indigenous Tourism BC featured his cuisine in a video. He started 2020 with plans in the works for his first Mr. Bannock franchise and lots of catering contracts. He’s on the board of Indigenous Culinary of Associated Nations and was mentoring other young chefs. Years of sacrifice and dedication were bearing fruit.

And then everything stopped. Catering jobs, which provided a year-round financial foundation, disappeared as people cancelled birthday parties, weddings and corporate events. With everyone working from home, there wasn’t anyone popping out to pick up lunch at his food truck. Going outside for a walk seemed like risky behaviour, let alone getting food prepared by someone else.

Adding to the stress was having six kids no longer in school. Luckily, his partner has her own business and was able to continue working remotely. She and Natrall tag-teamed on homeschooling, which wasn’t easy.

“The whole thing was tough,” he says.

Rather than give into dark thoughts, Natrall decided to get creative.

He researched and perfected new fusion indigenous street recipes such as DBK: smoked duck with bacon, housemade Korean bbq sauce, kimchee and sesame seeds on his grilled bannock bun. Stone-baked bannock pizzas are in the works for fall, as are indigenous takes on floats.

Blackberry upside down loaf cake, finished off with fresh blackberries and drizzle of honey glaze. Ps the cake was made...

He turned to social media to enhance his presence and do that other thing he does well — storytelling. He developed items he will brand and sell such as rubs and spices, such as the vanilla bean sugar coating he uses on his bannock profiteroles. (He’s just finalizing the packaging.) He’s continued work on a business model for Mr. Bannock franchises.

And he’s said yes to every request, every opportunity to promote Mr. Bannock. His Wild Rainier summer cocktail using Tito’s Handmade Vodka was featured in Vice magazine. (The recipe honours “rescue dog Rainier, and the abundant wild berries that have been foraged traditionally by the Coast Salish people for generations,” he writes on Facebook.) A three-minute video will soon be featured on Buzzfeed.

It felt good to be back amongst his foodie fans when he was able to reopen the food truck a few weeks ago for pick-up orders. (He’s stationed at 442 West 1st Street in North Vancouver.)

“I became an entrepreneur so I could provide for my family,” he says. The loss of the catering jobs was particularly tough and while he hasn’t heard whether his applications for small business grants have been accepted, he’s grateful for the way all levels of government kicked in, as well as the support and encouragement he gets from his food’s many fans.

There have been times when he’s thought of giving up. But he won’t. He can’t.

Helping to give him strength are memories of his grandmothers’ and mother’s resilience. And then there are the Squamish teachings to guide his way.

“There’s the connection we have as Indigenous people with the Creator. The Creator made a path for us that’s already set. We don’t know the peaks and the valleys that we have to go through,” he says.

“My grandmothers and my mom always used to say that when you’re feeling down, you light a candle and say prayers to the Creator. Today’s a hard day but tomorrow’s a brand new day. And when the brand new day comes, you just keep hustling and keep keeping 100 per cent.”