Our Awesome Session Ale will be available in bottles, growlers and on tap soon!

For the past couple of months I've been working with our friends at Postmark Brewing at 55 Dunlevy on a very special project that we've been keeping a cap on because we wanted to wait until just the right time to crack it.
Jul 9, 2015 12:13 PM By: Bob Kronbauer

For the past couple of months I've been working with our friends at Postmark Brewing at 55 Dunlevy on a very special project that we've been keeping a cap on because we wanted to wait until just the right time to crack it. And that time is today!

The deal is that we're releasing a collaboration beer called Awesome Session Ale which will be available in 650ml bottles, for growler fills and on tap. It’s a celebration of this great province of ours. A refreshing, dry hopped Northwest Session Ale using bravo, centennial, chinook, and cascade hops, created for everyone in BC to enjoy with friends – in our province and beyond.

1,800 litres of this ale is currently being conditioned in this tank pictured below and will be ready in a few weeks. As it's brewing I'm going to bring you into the process. 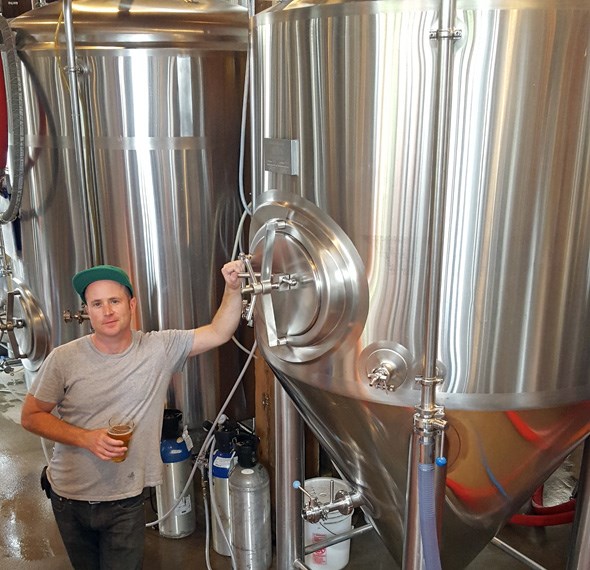 Craig Noble is the brewmaster at Postmark, and we went back and forth with him and their co-founder Steve Thorp about the type of beer that we hoped to produce. We knew that we wanted to make a classic Northwestern style beer, as a nod to British Columbia and its awesomeness. Session beers are their forte, and one of my favourite beers that they do is their Blonde Ale, so we worked to marry those ingredients together to make what is truly going to be an awesome session ale. Like their blonde, but a bit hoppier and definitely with its own unique flair. And speaking of ingredients, here's exactly what went into this batch:

Lots and lots of love!

Craig is super passionate about what he does and about passing down the knowledge he's obtained. He was adamant that I come in and help every step of the way, to "get my boots wet" as he put it, and the first day involved all of these malts below. 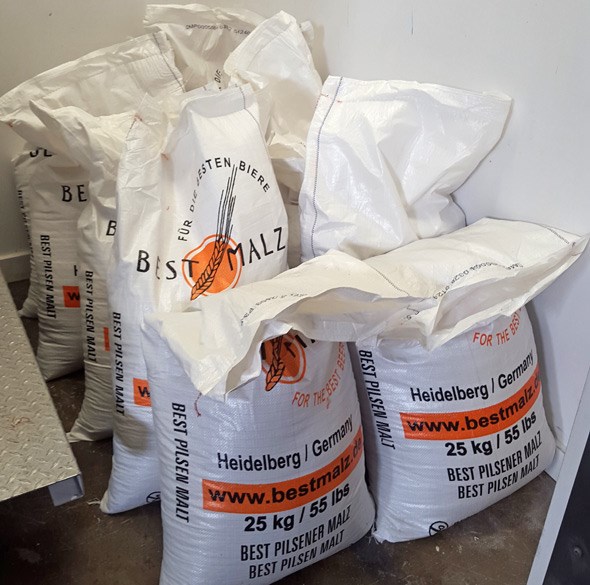 I loaded all of them up into this auger thing which transferred them into the Mash Tun where I then stirred them up with a bunch of water for about an hour or so. Click PLAY on the video below. It's mesmerizing.

This first step of mixing the malts with water is where the sugar in your beer comes from. The husks (I believe that's what they're called) are discarded at this point. As in, I spent a good deal of time with a sort of rake taking them out of this thing and putting them into three barrels. 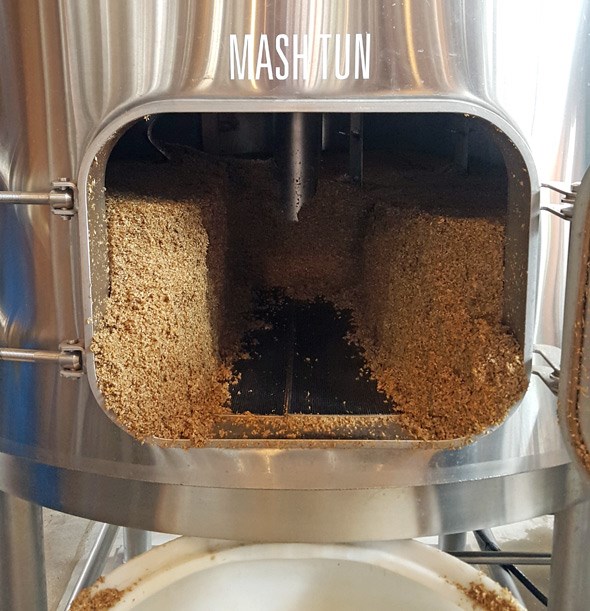 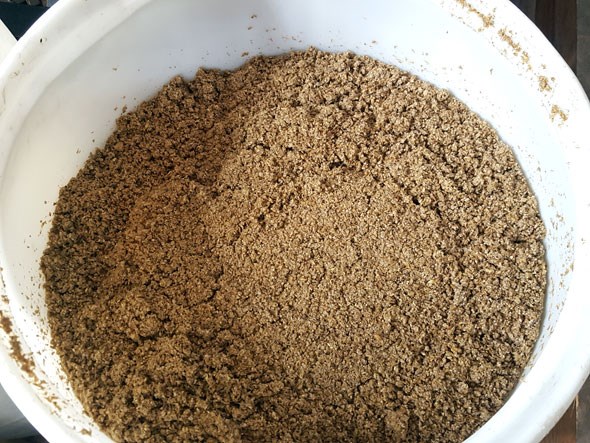 The forklift here is for size reference. All three of these huge barrels were put out on the curb where a farmer they work with comes by every day and picks them up. Instead of this byproduct of the brewing process going to waste it gets used to feed his pigs! There are other uses for spent grains but this seems to be the most popular in BC. 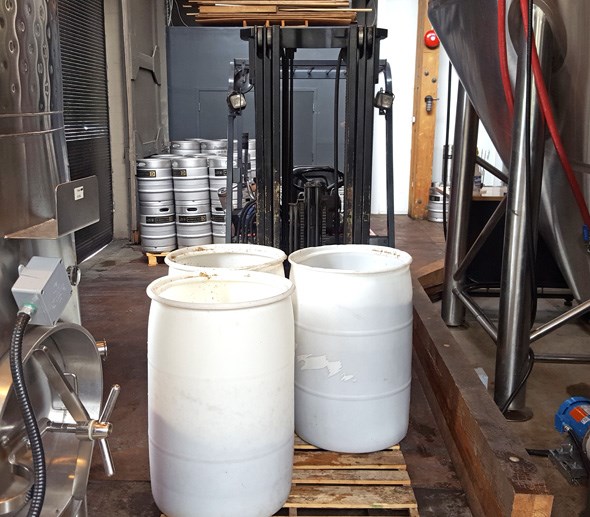 The water that the now-gone malts were soaked in is now full of sugars that were converted from the starches during this first process. That solution gets moved on to the next step where it's mixed with hops, and more water is added, and more heat is applied. 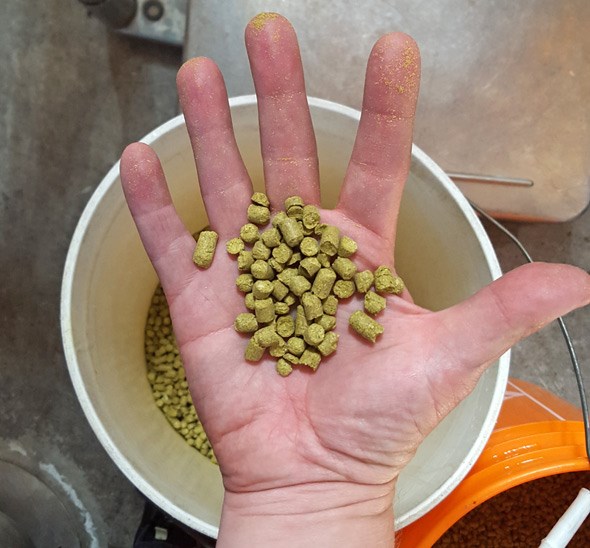 Hops in pellet form are the standard these days 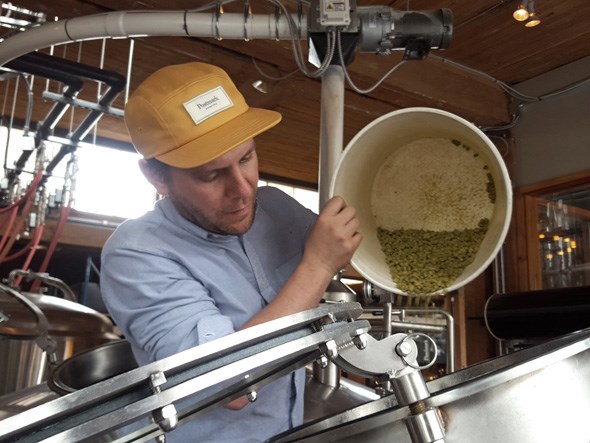 After this point it gets moved into the fermentation tank (first photo in this story) where it's mixed with yeast. This is where the alcohol builds up over a few days of brewing. Craig monitored it and once it reached 4.2% he stopped the process of fermentation by bringing the temperature down. It then sat for a few days and we "dry hopped" two varieties of hops into the existing beer that's actually already developed some carbonation. This dry hopping is basically just adding more hops late in the game won't change the taste too much but will affect the aroma profile. Not only will this taste like a Northwestern style ale but it will smell like one!

Right now the beer is conditioning. It'll be doing that for a couple more weeks and then we'll do a sort of filtering process to it that is more like science than anything we've done so far. I believe we'll be adding a little bit more carbonation as well, then the beer will be ready to go into bottles, kegs, growlers, and your glass! I'll be writing another post when we hit the next stage, sign up below to be kept in the loop for the release etc.

'There's just no money on the table': Restaurant owner on closing all three of his Vancouver locations
Oct 25, 2021 2:28 PM