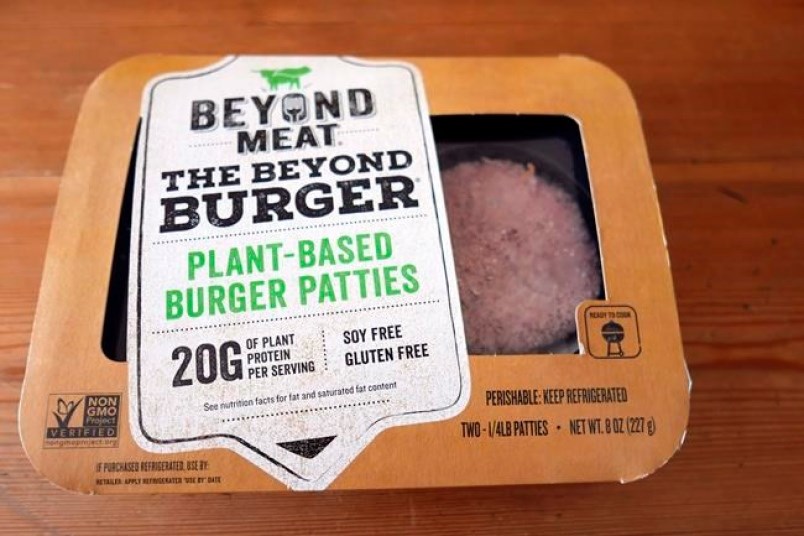 A package of meatless burgers are seen in Orlando, Fla., on June 26, 2019. When A&W started serving Beyond Meat veggie burgers at its restaurants, the fast-food chain offered many patrons their first bite of the much touted, celebrity backed plant-based patty. In the year and a half since, Canadians continued searching for plant-based options at home and on the go. By the time A&W added a plant-based nugget in December, many fast-food chains -- even long-time holdout McDonald's Canada -- boasted a trendy vegetarian menu item, too. THE CANADIAN PRESS/AP, John Raoux

VANCOUVER — When A&W started serving Beyond Meat veggie burgers at its restaurants, the fast-food chain offered many patrons their first bite of the much touted, celebrity backed plant-based patty.

In the year and a half since, Canadians continued searching for plant-based options at home and on the go. By the time A&W added a plant-based nugget in December, many fast-food chains — even long-time holdout McDonald's Canada — boasted a trendy vegetarian menu item, too.

As restaurants jumped on the plant-based protein craze this past year, the products also proliferated on grocery store shelves.

Earlier this month, Beyond Meat announced grocers across the country would start stocking its Beyond beef product, which mimics ground beef. It launched its burgers in the summer and they're now sold at more than 4,000 stores in the country.

Kicking off the trend, Health Canada revealed a new food guide in January recommending people "choose protein foods that come from plants more often." It minimized meat's dominant position in the previous iteration and put the meat industry on the defensive for their share of consumer plates.

But the folks leading major plant-based manufacturers say consumers want their products and plan to add more varieties and sales points, create tastier options and lower their prices to beat out bargain meat.

A&W sparked a consumer frenzy when it debut the company's veggie burger in July 2018. The chain temporarily sold out of the patties, having under-estimated people's appetites.

That sales spike wasn't a flash in the pan, either. Demand "stayed remarkably stable" since that temporary shortage, said chief executive Susan Senecal.

A&W added a new veggie option this month — Lightlife nuggets. Only its Ontario and B.C. restaurants stock the chicken-nugget imitation, and A&W expects to sell out by the new year. Still, in a sign of the industry's strength, the company hopes eventually to offer the nuggets nationwide.

"I think there's a huge opportunity for growth in Canada," says Ethan Brown, the founder of California-based Beyond Meat.

Beyond Meat wants to add more product types and sales points, so consumers can find every type of meat substitution conveniently.

After A&W introduced Beyond Meat burgers to Canadians, other eateries raced to offer something for vegans, vegetarians or — most frequently, it seems — flexitarians. The latter describes those who sometimes swap meat for other options for environmental, health or animal welfare reasons.

McDonald's Canada, which long resisted consumer calls to bring back a veggie burger, decided to pilot a PLT — a Beyond Meat sandwich — for 12 weeks, starting in late September, at 28 restaurants in southwestern Ontario.

The company is trying to understand what place plant-based proteins may have in its operations, said John Betts, McDonald's Canada chief executive.

He believes it won't canniabalize the company's meat product sales, but will likely reflect what he calls "the salad effect." When McDonald's first introduced salads in the 1980s, it removed what executives dubbed "the veto vote" of someone preventing a group visit to McDonald's because it didn't suit their dietary needs or preferences, he said.

"Plant-based protein could be the new salad type of option," he said, stressing the chain expects the addition to drive up meat sales, which remains the company's focus.

The Quebec Cattle Producers Federation called on the country's food inspection agency to intervene on what it called misleading advertising on Beyond Meat's products, saying the company shouldn't be permitted to use the word meat.

The Centre for Consumer Freedom, a Washington, D.C.-based non-profit organization funded by food industry and consumers, took on the issue of what it calls "fake meat." It launched a website and created advertisements alleging some plant-based protein products use potentially harmful chemicals and can be worse for humans than their meat counterparts.

"It's unfortunate," said Beyond Meat's Brown of the organization's campaign he says is geared toward scaring consumers from eating food that will benefit them.

The burger, for example, contains no trans fat or cholesterol, and 20 grams of protein, according to the company. It does include 16 per cent of the daily recommended sodium content, which is comparable to a seasoned meat patty.

Beyond Meat will launch a substantial marketing initiative in Canada next year, said Brown, as it looks to grow its presence in the country.

"The products that we have are limited in scope. They need to be improved and we need to expand our market presence."

He envisions a future where shoppers can select a Beyond Meat alternative for any animal protein cut they were shopping for at the grocery store, such as a boneless chicken breast or steak, and where diners can sample more of its product range at restaurants. Beyond Meat anticipates more partnerships next year.

For some consumers though, the price presents a roadblock. A pack of two Beyond burgers costs $7.99 plus tax at one Canadian grocery chain, compared with $12.99 for an eight-pack of its house-brand burgers.

Brown aims to lower prices to undercut animal protein within five years, though it may happen sooner in certain segments.

Greenfield, too, believes there's room for growth in Canada.

"In totality, the plant-based products that are being sold are still in its infancy," said president Dan Curtin, adding household penetration remains low for the category.

"But it's beyond just the core products that are out there," he added, pointing to the company's partnership with A&W for the limited-time plant-based nugget offering.

Greenfield plans to continue creating new products to add to its restaurant and grocery distribution channels.

"It is about innovation."

Beyond meat: How a Vancouver restaurant named for an animal honours every ingredient, every eater
Sep 12, 2019 11:27 AM

The West End is getting a brand-new fully plant-based comfort food restaurant
Oct 4, 2019 10:31 AM