Among the details to be worked out: boosting staffing, new health protocols and how to manage customer behaviour
May 5, 2020 3:43 PM By: Canadian Press 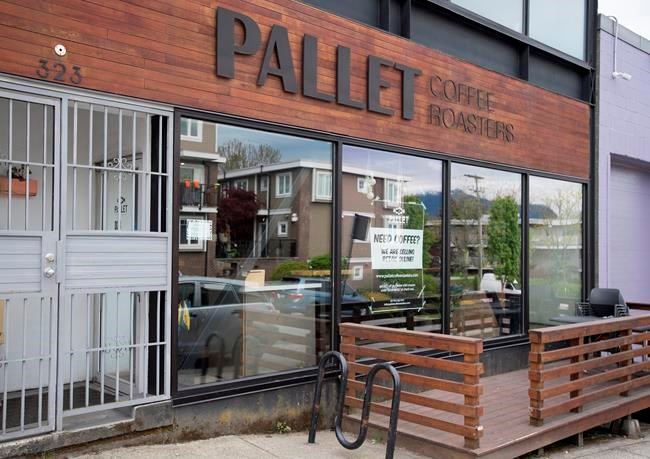 A Pallet Coffee Roasters location is pictured in Vancouver, Monday, May 4, 2020. After about a month and a half hiatus from serving coffee, Vancouver's Pallet Coffee Roasters plans to reopen partially five of its cafes later this week in an effort to bring in more revenue as it works toward paying another month of rent on limited sales. THE CANADIAN PRESS/Jonathan Hayward

VANCOUVER — After a roughly seven-week hiatus from serving coffee, Vancouver's Pallet Coffee Roasters over the next week will reopen five of its cafes in an uncertain environment.

The Vancouver coffee chain is one of many eateries planning to resume service as governments ease restrictions put in place to fight the COVID-19 pandemic. Among the details to be worked out: boosting staffing, new health protocols and how to manage customer behaviour.

"There's no guidebook for this kind of thing," said Alyssa Rugg, operations manager at Pallet. The company is making decisions using a combination of public health advice, results from other businesses that have resumed and sometimes just going with its gut.

B.C. ordered restaurants to close dining rooms in late March, but continued to allow takeout and delivery service. Other provinces made similar moves.

Pallet, which has been selling coffee online for delivery and pick-up at one downtown location, decided it was time to reopen additional shops as similar businesses began to resume.

The first step, said Rugg, was making sure its staff felt ready and comfortable with returning to work.

"We could have these hopes and dreams of reopening, but if none of them are comfortable to return yet or circumstances have changed, then it doesn't matter. They're the whole kind of backbone of what we do," she said.

Pallet explained to them it wanted to start selling coffee and a limited bakery menu to customers from the front door. No customers would be allowed inside.

"The last thing that we wanted to do was bring (our staff) back straight into a really overwhelming situation," said Rugg, noting if customers came inside, staff would have to be responsible for directing and managing them to maintain proper physical distancing and observe other protocols.

Tim Hortons is already encouraging its franchisees to build their teams back up in anticipation of dining rooms reopening, said chief operating officer Mike Hancock.

Roughly 85 per cent of Canadian Tim Hortons restaurants remain open, but with limited options like drive-thru, delivery and curbside pick-up. As these locations move to expand their services, they'll need more staff.

"Staffing will have some challenges throughout the entire country, I would say at this time," he said, adding the company has taken measures to ensure employee safety, such as installing acrylic screens and giving workers face masks.

The company will also have to make changes to its dining rooms and policies to comply with regulations.

Many provinces have started easing some restrictions or announcing their intention to do so in the near future. In Quebec, for example, retail stores outside of Montreal have begun to open.

Each province appears to have a different timeline, said Hancock, but there are similar rules, such as smaller caps to dining room capacity.

"We're building out essentially scenarios for each phase, for each province," he said.

A big part of that is how to communicate new policies to guests. That includes placing social distancing markers on floors and perhaps blocking off parts of the dining room or eliminating shared tables.

The marketing team is working on signs that will tell customers where to stand and inform them of other rules. So when provinces announce specific requirements to re-open in-restaurant dining, the company will have signs ready to go, he said.

A huge question mark for Pallet was ordering supplies, said Rugg, and that's part of the reason it chose not to serve food beyond pastries as that would further complicate logistics. She said she's lucky to have accommodating suppliers, such as a cup supplier offering a one-day turnaround as Pallet figures out how much it needs.

The chain also had to determine new hours of operation for the takeaway service. Like many retailers, it has reduced hours in order to keep costs low and to prevent overworking staff.

"We don't know what the response is going to be," said Rugg.

Pallet is also starting to think farther down the line toward reopening its dining rooms — though when and how remains unclear.

Rugg  worries about regulations set for restaurants in other jurisdictions, namely the U.S., and that those coming changes may be prohibitive.

She notes customers may become fed up with long waits if dining rooms operate at reduced capacity and staff must undertake extensive cleaning procedures in between clients. Its sparked some conversation among staff about when it may be worthwhile for the company to reopen its retail locations.

"Who knows what the kind of outcome of those kind of measures could be," she said, noting she understands why these measures may be necessary to protect public health.

"But it doesn't change the fact that it will be difficult."

This report by The Canadian Press was first published May 5, 2020.

Feel City BBQ: New spot for northern Chinese charcoal-grilled skewers and lamb dishes opening in Vancouver
Oct 28, 2020 2:05 PM
Comments
We welcome your feedback and encourage you to share your thoughts. We ask that you be respectful of others and their points of view, refrain from personal attacks and stay on topic. To learn about our commenting policies and how we moderate, please read our Community Guidelines.