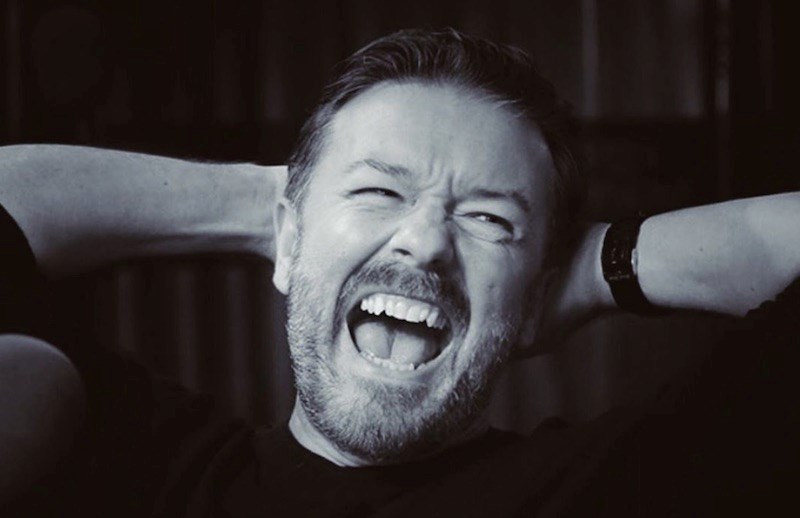 Ricky Gervais f-ing loves Vancouver, and one of our local craft brews in particular. Photo: @rickygervais/Instagram

Comedian and actor Ricky Gervais is a huge fan of Vancouver, and we've just learned it's also one of our city's delicious craft brews that has left an impression with the Brit.

Asked on Twitter what his favourite beers were, Gervais professed a "like" for Brooklyn lager and other beers he's tasted at micro breweries from across the globe.

But, then, just like two years ago when he saved the best tour stop for his last, Gervais gave some serious love to Vancouver.

"I remember thinking 'Gypsies Tears' in Vancouver was the best I'd ever tasted," the comedian tweeted.

I like so many and I can't remember all the names. I like Brooklyn lager and loads from different micro breweries around the world. I remember thinking 'Gypsies Tears' in Vancouver was the best beer I'd ever tasted though.

Though it's undergone a slight name change, the brew he's talking about is Parallel 49's Ruby Tears. The Northwest Red Ale is a year-round pour for the "Yeast" Van brewery, who describes Ruby Tears as follows: "A ruby red coloured ale with a rich caramel malt flavour and a burst of West Coast hops. Using only late hop additions and dry-hopping, the bitterness is restrained while the hop flavour and aroma are pronounced."

We for sure know Gervais loves his beer - after all, he hosted the Golden Globes in January for his fifth and final time with a glass of beer in hand - and we also know he thinks Vancouver is awesome. In fact, he f-ing loves Vancouver.

Gervais has got his "SuperNature" North American tour coming up, and once again, he's saved the best for last, capping off a May through August run with two back to back nights at the Queen Elizabeth Theatre on August 26 and 27.

Presumably, come the end of August, Parallel 49 will be pulling a Liam Neeson sandwich scenario and putting it out there that Gervais can drink their Ruby Tears for free (if the BC liquor board allows that kind of merriment). In the interim, if you want to get a fresh pour of Ruby Tears, P49 has a terrific taproom in East Vancouver, or you can find the cans for sale.