Vancouver fan Ricky Gervais is back in town. Are we still his favourite city? 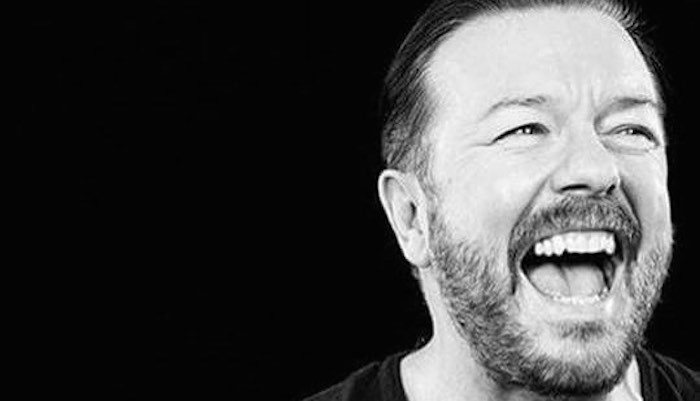 January 29 and 30 mark the last two days of Gervais' year-long "Humanity" tour, and it's probably no accident he is wrapping up a gruelling run on the road in one of his favourite places.

"Ending the North American leg of my #Humanity tour in beautiful #Vancouver this week. Have I saved the best till last?" he Tweeted Sunday, departing from Seattle.

Ending the North American leg of my #Humanity tour in beautiful #Vancouver this week. Have I saved the best till last? pic.twitter.com/I14cd4gQ64

While most of us may jump to say, "Yes, obviously!" to Gervais' rhetorical question, the British comedian may already agree with us. If we flash back to February 2014, Gervais took to social media to show that he was enjoying a working visit to Vancouver, including a stop at Granville Island to meet a "big fan."

Spent the morning on wonderful Granville Island, Vancouver. Stopped to have my photo taken with a huge fan too. pic.twitter.com/HEG9isx30D

Then, in late September 2014, when Gervais was in Vancouver to film “Night at the Museum: Secret of the Tomb" he turned to Twitter again to profess his love for the city.

Happy to report that Vancouver is still beautiful pic.twitter.com/obk00ZV8SQ

Gervais has covered a lot of ground--geographically, never mind his stand-up show--in the last few months, which means he has been smitten with other cities. Most recently it was San Francisco, of which Gervais said a few days ago: "I may have a new favourite city." GASP! No!

Vancouver, let's make sure we win Gervais back.

So, dear Mr. Gervais: Welcome back to Vancouver! Remember, we are very beautiful...and chill.

Ah, so this is why Vancouver is so chilled out pic.twitter.com/iwsjqpGhs6

Oh, and some good news if you don't have tickets to Gervais' "Humanity" at the Queen Elizabeth Monday or Tuesday: Netflix has just announced they will stream the show starting in March.