Vancouver's new Filipino food truck began with a hangover cure, and is fuelled by the nostalgic flavours of a nation whose cuisine remains under-represented here.

Every now and then a great business plan starts as a hangover cure. And in a way, that's how Vancouver's new Filipino "jeepney" food truck - the cheekily-named Shameless Buns - began. That's because one morning Matt Brennan made himself a breakfast sandwich using pandesal, a sweetened Filipino bread roll, and a conversation with his partner, Corvette Romero, began about turning that hand-held fusion eat into money-making operation.

Then again, the seed for a livelihood based on the flavours of the Phillipines was planted ages ago for Romero, who grew up in the Asian island nation. She was able to expose Brennan to some of those signature flavours - like adobo, sinigang, ube - when the couple took a trip to her homeland. Not only does the couple share a love for each other, but also a love for those complex, sour, sweet, spicy notes that have remained as-yet a bit under the radar here in Vancouver. 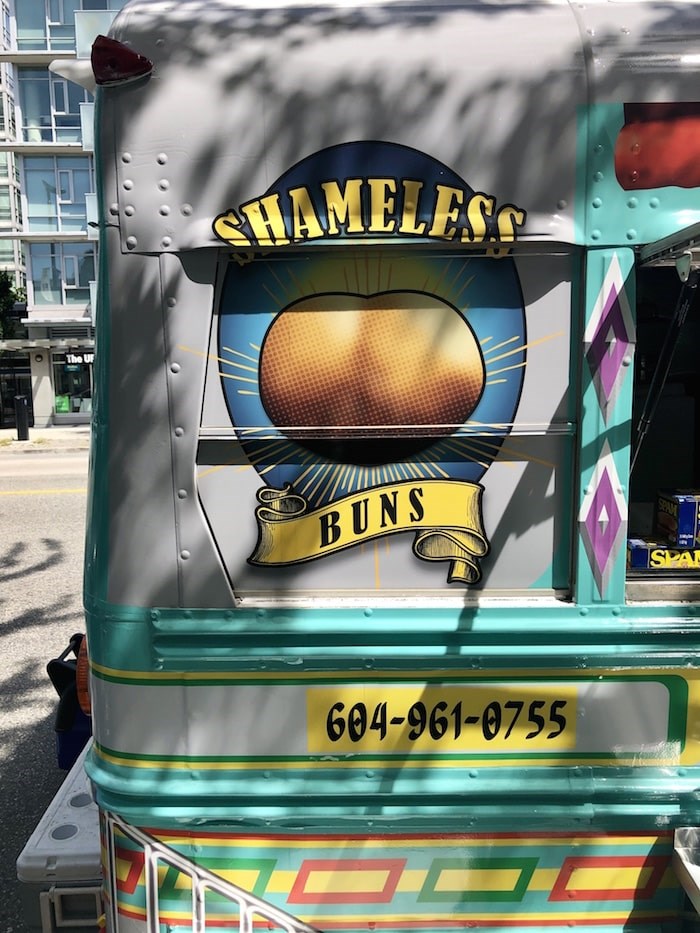 Romero and Brennan's wish to get Filipino comfort food into the hands of hungry Vancouverites evolved when they were able to obtain a converted school bus they tricked out further to be the Shameless Buns truck. The bus is a nod to the jeepney, a popular mode of transport in the Phillipines that is being phased out; the colourful vehicles also happen to be big polluters. The Shameless Buns truck, mind you, meets all of Vancouver's strident requirements for a food truck, and runs on propane.

The iconic jeepney riff is one of the many ways Shameless Buns plays on the vibrant and often kitschy aspects of Filipino culture. So many foods beloved in the country came from U.S. influences during wartime, like ketchup and Spam, and Filipinos have held on to, and adapted, those tastes over the years. 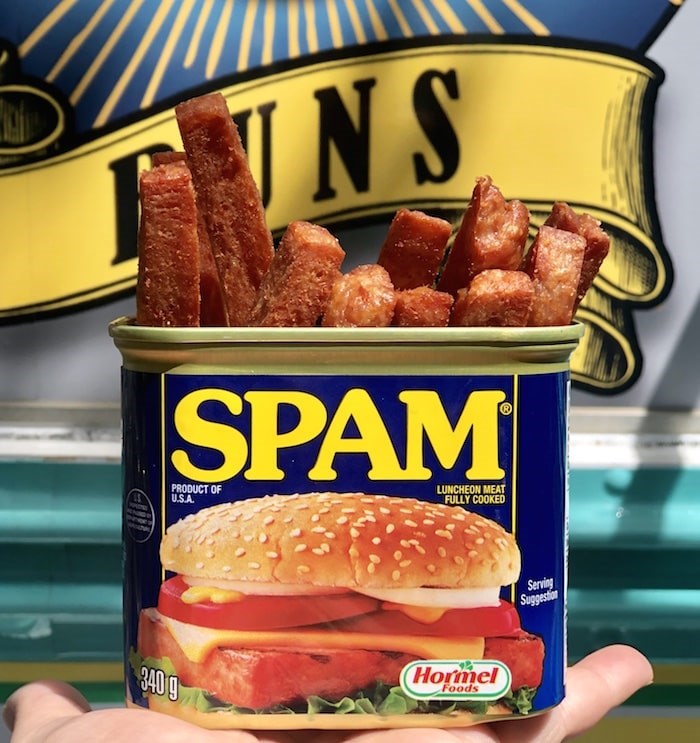 Similarly, Shameless Buns anchors their menu around those nostalgic touchpoints, as well as the Vancouver palate, and the concept of portability - they are a food truck, after all. So you'll find a series of pandesal sandwiches at the heart of the menu, along with poutine-inspired loaded fries, Spam fries, and even Filipino soda pops that are hard to find here.

The Little Sausage and sibling sammy Sir Spam-A-Lot (it's got a fried slice of Spam instead of longaniza) both feature Shameless Buns' housemade banana ketchup. Brennan says their take on the condiment features a staggering 23 ingredients, and, as promised packs a nice punchy meld of sour, spicy, and sweet.

Banana Ketchup happens to be one of those Filipino inventions borne of necessity, when, in 1942, a local company made use of a native crop to come up with a condiment like the American tomato ketchup that could be mass produced and sold. 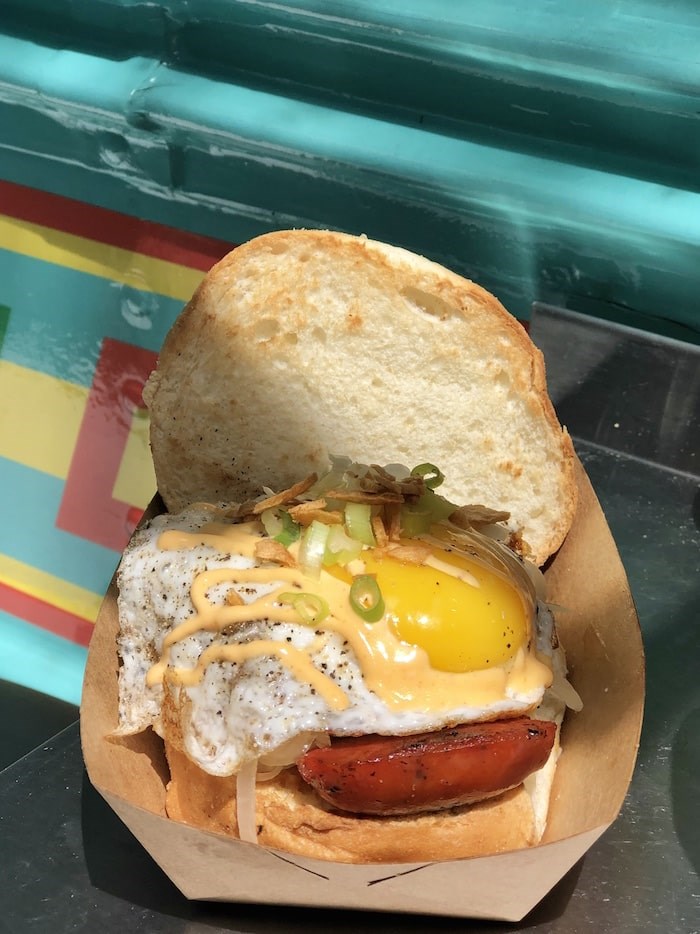 The Little Sausage Sandwich at Shameless Buns. Photo by Lindsay William-Ross/Vancouver Is Awesome

Spam enjoys a similar popularity, so it's got a presence aboard Shameless Buns, of course. In addition to the sandwich, you can get an order of Spam Fries, which are sticks of spam fried up crispy and perfect for dipping in banana ketchup or their garlic calamansi aoli.

The other "side chicks" on the menu are based on actual potato fries that are loaded up with big, bold Filipino flavours like adobo chicken or a vegetarian jackfruit option. The jackfruit fries and sandwich are there for Vancouver's many vegetarians, but Romero confesses coming up with something all-veg did pose a challenge, since Filipinos eat a lot of meat.

Romero is one of the rare folks you'll meet in Vancouver who grew up with a jackfruit tree in her yard in the Phillipines; while there the fruit ripens until it's deeply sweet and almost creamy, here we know the green canned chunks that make a great plant-based meat substitute. A few tests later and a meat-free option for the menu was born. 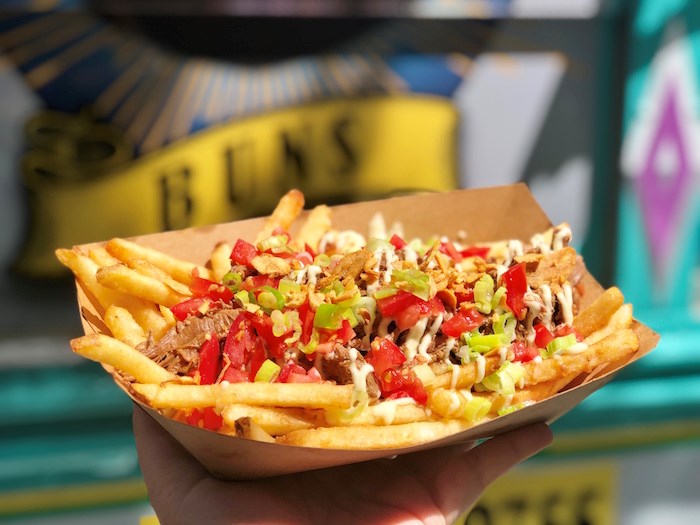 But back to fries: purists can opt to get a side of them that come simply adorned in sinigang spice. Shameless Buns plays on the sweet and spicy tamarind-based flavours of the traditional Filipino soup here to make those fries sing.

For dessert, they've got the "Happy Ending," which is pandesal French Toast loaded with prime Filipino sweets, like coconut macapuno (kind of like a freaky coconut funk), housemade ube jam (and yep, it's bright purple naturally), Milo (the powdered chocolate drink), condensed milk, coconut jam, and pinipig (which they call "toasted rice puff of love"). 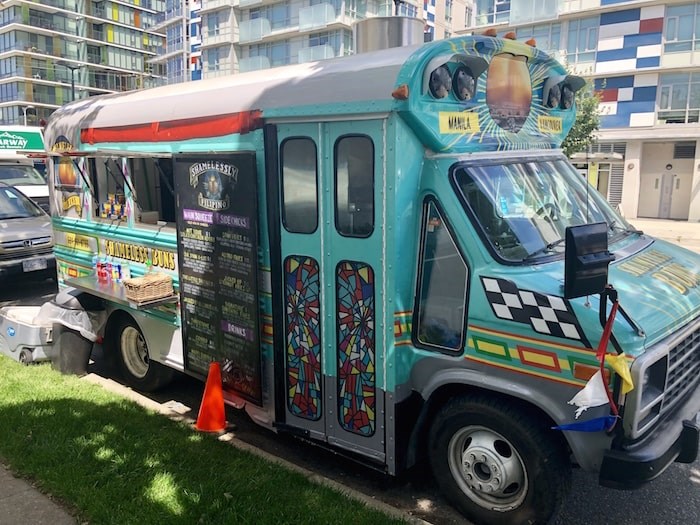 Shameless Buns, loaded up with their wink-wink menu puns, bright and cheery jeepney-style bus, and tasty Filipino eats, got on the road in Vancouver in early May. They are able to park in various spots around the city and at events, so you can follow them on Instagram @shamelessbuns to keep up, or check the Vancouver Street Food App schedule for where they'll be next to get your hands on their sweet - and shameless - buns.