Starbucks Canada plans to open as many stores as possible by the end of May
Apr 29, 2020 7:15 AM By: Glen Korstrom 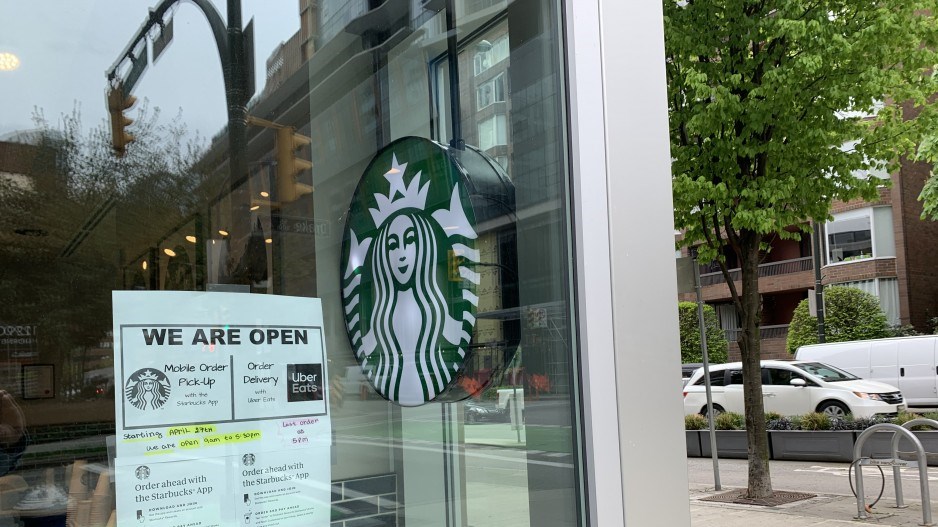 A sign on the Starbucks at the corner of Hornby and Drake streets notes that the location has reopened. Photo by Glen Korstrom/BIV

Starbucks Canada plans to open as many stores as possible by the end of May, the company said this morning. It had closed most stores completely as of March 20, and many of those stores reopened on April 27.

The company currently offers drive-through, delivery and pick-up service at its stores.

Dine-in service remains banned in B.C., although provincial health officer Bonnie Henry has said that she plans to work with the restaurant industry to hear proposals for how in-restaurant dining could be done safely.

BC Restaurant & Foodservices Association CEO Ian Tostenson then put together a working group with dozens of restaurant owners, including Starbucks, to draft a proposal that he has since passed on to government.

Starbucks said it will monitor and adjust operations, making decisions to open additional stores or expand services, such as curb-side, pick-up or walk-in orders, on a community-by-community basis within Canada. It added that it will work closely with local leadership, health authorities and provincial governments as the environment and regulations change.

All partners, or licensees will attend two blocks of training over two days to learn about safety and operational changes and community building.

Starbucks Canada began paying what it called “catastrophe pay” in early March and will continue to provide this pay through June 14for any partner:

All partners are required to wear a facial covering if they are working at a store. Partners are reminded not to touch their eyes, nose and mouth, and to wash their hands, maintain physical distancing and sanitize high touch surfaces frequently.

The company has also sourced plexiglass shields to install in stores that have been closed so that when they reopen baristas will be better protected against the global pandemic.

New fried chicken spot The Roost opening in West End's former Centro
Jun 30, 2020 9:44 AM
Comments
We welcome your feedback and encourage you to share your thoughts. We ask that you be respectful of others and their points of view, refrain from personal attacks and stay on topic. To learn about our commenting policies and how we moderate, please read our Community Guidelines.