This summer, while you're rooting for the home team at Nat Bailey Stadium, you can cheer on your Vancouver Canadians while chowing down on the ultimate mash-up of ballgame fare meets west coast cuisine: The brand-new Sushi Hot Dog.
0
May 22, 2019 10:17 AM By: Lindsay William-Ross

This summer, while you're rooting for the home team at Nat Bailey Stadium, you can cheer on your Vancouver Canadians while chowing down on the ultimate mash-up of ballgame fare meets west coast cuisine: The brand-new Sushi Hot Dog.

The Vancouver Canadians revealed this week that a sushi roll made with a hot dog wiener will be joining the roster of eats available during games this year at the stadium. 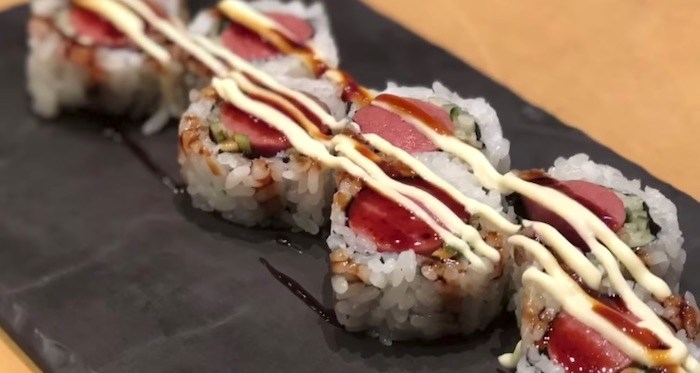 Sushi already plays a big role during Canadians games - if you've been, you surely know the traditional "Sushi Races" pitting costumed sushi-themed mascots running the bases in a mad dash.

And, to be fair, the realms of hot dogs and Japanese flavours have long collided in Vancouver, considering we're home to Japadog, whose claim to fame remains their hot dogs loaded with Japanese ingredients. So a sushi roll-hot dog food mash-up does make sense, particularly in a venue where over the top eats and epic three-foot hot dogs are the norm.

"When anyone thinks of ordering food in Vancouver, one of the first delicacies that comes to mind is our city's world-class sushi," elaborates the Canadians in a media release about the new menu item that was created in partnership with Coast Restaurants. They've also released a video about the Sushi Hot Dog, and are running a naming contest to drum up excitement ahead of the 2019 Canadians season.