Score $6.50 chicken dinners for one day only at this iconic Canadian restaurant chain

Swiss Chalet is celebrating their 65th anniversary right now. Known for their rotisserie chicken (and that Chalet Sauce), the chain will be selling their Quarter Chicken Dinner for just $6.50 a pop on Sunday, June 23.

I grew up in Toronto in the 1980s, where I developed an affection for Swiss Chalet. The iconic Canadian chain opened their first location at 234 Bloor Street West in Toronto back in 1954 in a location that eventually was demolished about a decade ago to make way for condos (isn't that always the way?). 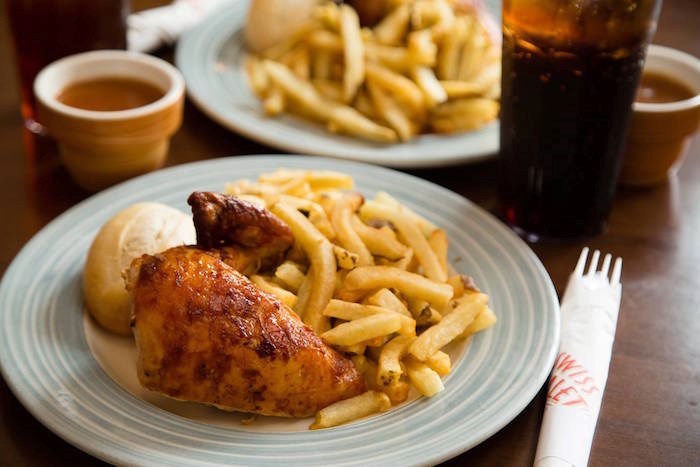 Eventually Swiss Chalet grew from their Toronto home base to include a couple of hundred locations across Canada and in the U.S. They've since scaled back a bit - they closed up all their U.S. locations, and one of their major Vancouver locations, on Broadway in Kitsilano, closed in the spring of 2017.

That said, Swiss Chalet is still going strong, and is celebrating their 65th anniversary right now. Known for their rotisserie chicken (and that Chalet Sauce), the chain will be selling their Quarter Chicken Dinner for just $6.50 a pop on Sunday, June 23.

The legendary Quarter Chicken Dinner features their chicken, prepared following the same recipe they've used for all 65 years, served with fries or salad, Chalet Sauce, and a dinner roll. The meal typically costs $10.99 and up, and, for many, is instant nostalgia.

The $6.50 special price is available for guests who dine in or do take out, and can be ordered ahead online; the $6.50 pricing is not applicable for delivery.

They also operate locations in B.C. in Chilliwack, Kamloops, Kelowna, and Victoria.

“Swiss Chalet is honoured to be celebrating its 65th anniversary with Canadians,” said Frank Hennessey CEO of Recipe Unlimited in a media release. “We couldn’t have reached this milestone without our loyal customers and wanted them to take part in this very special occasion."

This article has been updated from a previously published version with a correction regarding the availability of delivery.