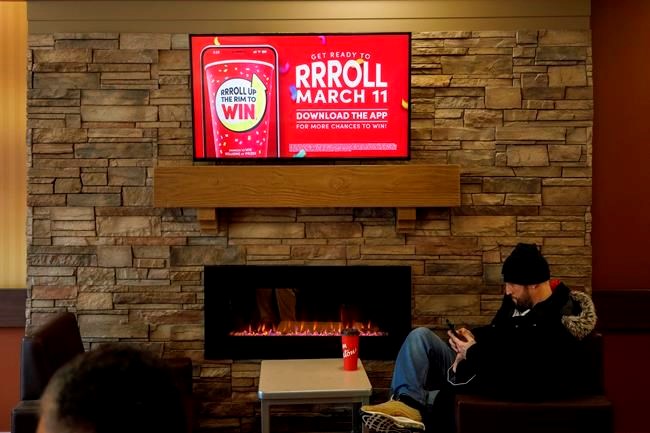 Signage for Tim Hortons' Roll Up the Rim contest is seen inside a Tim Hortons restaurant in Toronto, Friday, March 6, 2020. THE CANADIAN PRESS/Cole Burston

TORONTO — Tim Hortons says it is getting rid of Roll Up The Rim cups due to the novel coronavirus and is moving much of the annual contest to its app.

The coffee-and-doughnut chain is removing all of the contest's paper cups over health concerns around staff handling items recently gripped and sipped by customers returning them for prizes.

Tim Hortons does not identify COVID-19 as the catalyst, but says "the current public health environment" means "it's not the right time for team members...to collect rolled up tabs that have been in people's mouths."

The company says it will redistribute all $30 million worth of prizes to restaurant giveaways and a digital contest.

On Friday, Tim Hortons and McDonald's Canada became the latest coffee purveyors to stop accepting reusable mugs brought in by customers amid concerns about the epidemic, with the number of confirmed cases in Canada rising to 57 as of Saturday.

The temporary move followed similar decisions by Starbucks and The Second Cup Ltd. announced earlier in the week.

This report by The Canadian Press was first published March 7, 2020.