It's a ship that was an island, but now it's connected to the mainland.

Brendan Kergin
Jan 15, 2023 6:10 PM
Previous Next
Clockwise from top left: The base from above in the 1950s, a promotional image shot at HMCS Discovery in 1946, the HMCS Badge, part of a Remembrance Day ceremony at the base.City of Vancouver Archives/Government of Canada/HMCS Discovery
Expand
Listen to this article
00:03:13

For 80 years Vancouver has had a small, albeit easy-to-spot, naval base.

HMCS Discovery, named after Capt. George Vancouver's ship, sits on Deadman's Island, a small piece of land now connected to Stanely Park by a narrow causeway (though it was an island). For much of its history it's been a useful location for the navy, and continues to have an active roll as it's used as a training facility and home for local sea cadet corps.

While that all may be familiar, here are a few things you (probably) didn't know about it.

1. Its full name is His Majesty's Canadian Ship Discovery

What's odd about that is the island is not a ship. It's arguably not even an island.

However, there's a tradition amongst some navies of land bases getting ships' names and becoming 'stone frigates,' including Canada. Notably, there's a dormitory in Kingston called HMCS Stone Frigate.

Also, its name changes, depending on the monarch, so it started off as 'His' and then was 'Her' until the Queen passed away last year. With King Charles III in charge, it's now 'His' again.

2. It has European battle honours

Because of how naming conventions in the British Commonwealth work, HMCS Discovery has two battle honours, one from the Battle of Portland in 1653 (an island in England, not the city in Oregon) and one from the 1801 Battle of Copenhagen.

A rebus is a sort puzzle that illustrates a word. In this case, the HMCS Discovery badge is a capital Y underneath a yellow circle. 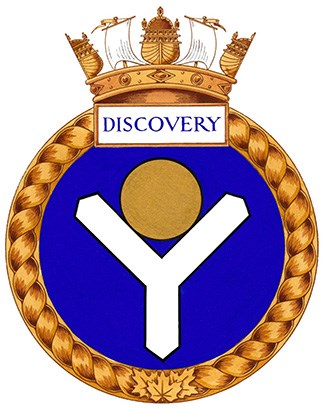 Written another way, it's a 'disc over Y.'

4. It played a big role in security during the 2010 Olympics

Vancouver's Winter Olympics in 2010 was a big deal for the city, and with the games came huge security concerns.

As one of the biggest events ever to happen on Canadian soil, it makes sense that security for the 2010 Winter Olympics and Paralympics was the biggest peacetime domestic operation to date. That means military involvement, and HMCS Discovery was used to run the naval arm of that operation.

Long before the navy moved onto Deadman's Island it was a tree burial ground for local First Nations. When settlers arrived, they decided to use it for the same purpose.

It may be that history that's led to ghost stories coming from the island. Ghosts of Vancouver has collected several stories from the 1990s about the hauntings, often connected to furniture being moved around.