This Metro Vancouver elementary school named the greenest in Canada

Numerous green initiatives at this Richmond elementary school have earned them the title of “Greenest School in Canada,” an honour bestowed on them by the Canadian Green Builders Council.
Sep 27, 2019 7:25 AM By: Maria Rantanen 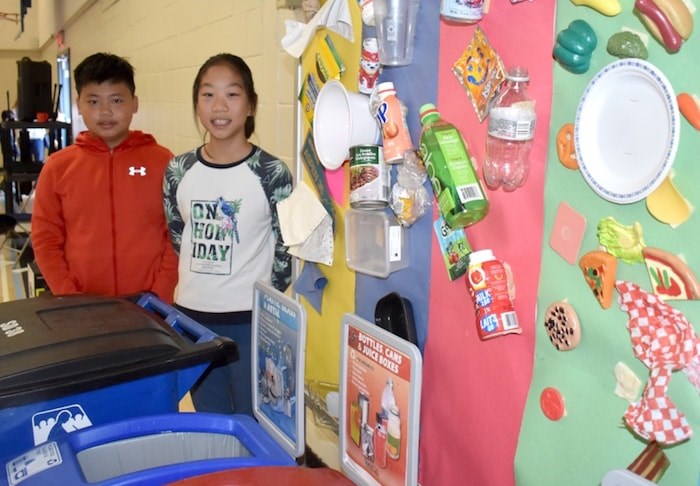 Ethan He, Grade 7, and Joyann Hua, Grade 6, helped lead an assembly at Ferris elementary where it was announced theirs is the greenest school in Canada. Photo by Maria Rantanen/Richmond News

This and other green initiatives have earned them the title of “Greenest School in Canada,” an honour bestowed on them by the Canadian Green Builders Council.

At an assembly on Thursday, the school was presented with a cheque of $2,000 from the Canadian Green Builders at which time they learned they had received the title.

Kevin Lyseng, a teacher at the school, praised Ferris students past and present for working on the many environmentally friendly projects around the school.

“So many fantastic ideas (…) have come from the students,” Lyseng said.

The school also won an award from Staples last year for their environmental initiatives worth $20,000.

The list of green initiatives at the school is impressive: they’ve reduced their garbage by 80 per cent and do regular garbage audits, they grow fruits and vegetables in school gardens, they’ve replaced their vending machine with refillable water coolers and they compost with worms. Furthermore, they recycle their hand paper towels, they’ve reduced their battery usage and use refillable markers and they’ve closed off the driver’s loop where kids were dropped off and picked up to encourage walking and cycling to school.

When asked at the assembly how many students walked and cycled to schools, hundreds of hands went up in the gym.

In their application for the Greenest School, the students were asked five questions: how do they teach environmental education, how can they reduce the school’s impact on the earth, how does the building benefit the health of staff and students, how is the school involved in community initiatives and how do classrooms and the school demonstrate the ideals of a green school.

To get to the level of green that Ferris elementary has, it helps to have continuity at the school, explained Lyseng. He has been working with the students on green initiatives for 14 of the past 18 years. But even the four years he was working at the district level, a lot of the institutional changes he and his students had made stuck during that time.

But having “caring” as the schools motto and embedded into the school’s DNA is part of the formula.

“Caring about self, others and the environment is what we do,” Lyseng said.