Here’s what "King of Empty Promises" Kevin McDonald had to say on the state of comedy today, how The Kids in the Hall material has aged and whether you can actually teach someone to be funny.
Nov 30, 2018 7:18 AM By: John Kurucz

Imagine scoring a role in the most beloved episode of one of the most celebrated TV shows ever and brushing it off as no big deal.

Imagine still, a career that’s stretched over three decades thanks, in part, to jokes about cancer, childhood trauma and addiction, while also ruthlessly riffing on gender and sexuality. 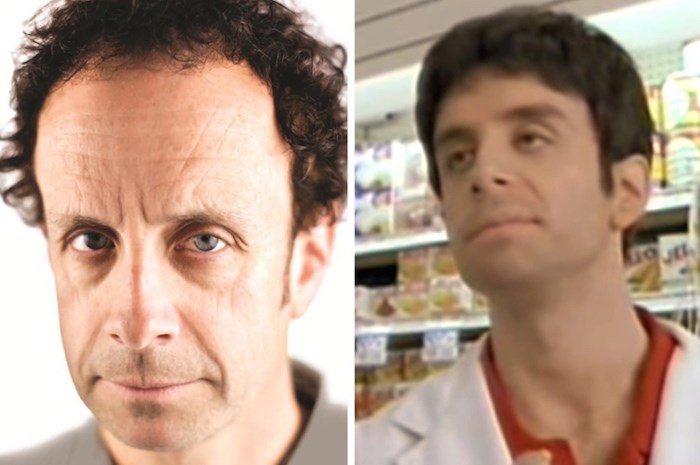 Current day Kevin McDonald, at left, thinks material from his Kids in the Hall days (right) has stood the test of time over 30 years.

Indeed, it’s been 72 degrees in Kevin McDonald’s head all the time. Or at least since the mid-1980s.

Alongside his fellow Kids in the Hall troupe members Dave Foley, Bruce McCulloch, Mark McKinney and Scott Thompson, McDonald helped redefine absurdity and offensiveness over the course of the show’s run from 1989 to 1995. And then there was the cult classic, feature-length film Brain Candy, which followed in 1996.

In an attempt to “keep making money,” McDonald will be in town this weekend to host a pair of comedy workshops, followed by a live show Sunday night at the Havana Theatre.

Though perhaps best known for his work with The Kids in the Hall, McDonald’s credits list is massive. Whether writing, acting or doing voiceover spots, McDonald has had his hands on That ’70s Show, Seinfeld, Arrested Development, Brooklyn Nine-Nine and a slew of kids shows and Disney work.

Here’s what the King of Empty Promises had to say on the state of comedy today, how The Kids in the Hall material has aged and whether you can actually teach someone to be funny.

Humour seems like a pretty intuitive thing, in that you are either funny or you aren’t. How do you teach someone to be funny if they aren’t funny to begin with?

You can’t teach people to be funny, so I don’t do that. You are either funny or not. My specific course is how to write sketch comedy for improv. Anyone who really wants to do it and gets excited by it, and as long I don’t “un-excite” them, I can teach them methods for when they’re dry for ideas. Or if you get writer’s block, I can show you which are the worthwhile jokes. You can make anyone better.

When you think of Vancouver, what comes to mind?

The Odds. In 1990 or 1991 when we were doing our TV show, we started touring and we went to Vancouver and fell in love with the Odds. I got their album first, then Dave Foley, then Bruce McCulloch. The other two could care less about rock and roll, but we played it in the office all the time. I remember when we went to Vancouver I said for our opening music we should play the Odds’ album. If they happen to be in the audience that will be us calling out to them. They had this great album and it was all over MuchMusic and the radio stations but it’s Canada, so they didn’t have a lot of money. So to get to see the show, they offered to work in the theatre doing sound or working as ushers. When they heard that song they understood what it was, that we were calling out to meet them. So after the show, they came up and we hung out all night.

Speaking of that timeframe, when you look back at material you wrote 30 years ago, how has it aged in your eyes?

I think it’s aged well and I’m a harsh critic. In fact some of the stuff that I didn’t like then, I like better now. It could be just because I know it and I’m used to it, but a lot of people who aren’t in the troupe or are strangers or our fans, think the same thing. I think it’s aged well because we didn’t so much write about the ’80s and ’90s. You can’t help but be affected a little bit, but we wrote about our dads, our girlfriends and our boyfriends, our work, our part-time jobs — the stuff that will be around forever.

Was any subject matter off limits when you guys were in the writing process?

No. It was an unspoken rule and we were always on the same page with this — as long as it was funny, we would do it. Sometimes Scott, as great a writer as he is, his stuff was more offensive than funny. It’s not that we were offended. The Kids in the Hall were born without an offensive gene, comedy wise. Dave and I once wrote a thing but I can’t tell you what it is, because it’s 2018 and we’ll get arrested. We thought it was as funny as it was shocking, but the others, especially the producers disagreed, so we never did it.

The Kids in the Hall’s most recent reunion show in Vancouver a few years back included some audience push back at certain times. The “Running Fa****” skit in particular really pissed some people off in the crowd, to the point of Scott Thompson sarcastically proclaiming, “That joke didn’t age well.” How do you feel performing a bit that really upsets parts of your audience?

I don’t remember where that happened, but I do remember it not going over too well in one or two places. I’m not sure if we’ll do that anymore, but if we do that at our show with our fans, it usually does go well. But if we ever do a comedy festival or a benefit, where it wasn’t our audience, we wouldn’t do it. Or maybe we would if we were in a “f*** you” mood. We may be too old for the “f*** you” mood, but we would know that if it’s not our audience, that’s not the scene to do.

If a student comes to you with a risqué joke, what advice do you give that person or how do you massage the gag so that it works?

It’s funny because I’ve been doing this since 2012 and the big change didn’t really happen until two or three years ago. I’m open and I’ve been open to everything if I saw the comedy in it. I’ve always gone with the Kids in the Hall motto: if it was funny, we would work on it. But in the last two or three years it hasn’t been a problem, because the [comedic landscape has] changed so much, that no one would offer those ideas.

You appeared on the Festivus episode of Seinfeld wearing a Canadian tuxedo — denim up top, denim on the bottom. Well played. How much input did you have on your wardrobe for that episode?

I auditioned for it and got it, but that was all their script. I didn’t even know that it was stupid to wear. I used to wear a jean jacket and jean pants until that show and then I realized it’s a joke and you don’t do that. That show taught me to stop wearing that. It was the Festivus episode, so that’s pretty neat. But it doesn’t go very far. It doesn’t buy the bread and root beer that I want to buy. Had you not brought that up now, I wouldn’t have even thought about it. For a moment I think to myself, “That’s neat,” and then it’s out of my system.

I imagine a day doesn’t go by in Mark McKinney’s life without someone crushing his head. What is the go-to bit for fans when they see you on the street?

They crush all our heads, so we get that. I hear this one a lot, even though it was Bruce’s scene, but because I took the pen, I hear “My pen, my pen!” People also yell “Evil!” to me a lot. It’s funny, I get loads of compliments on my King of Empty Promises character, but they don’t actually say “Slipped my mind.” I guess it’s too much of a deep character that they don’t want to do that, so they just mention it a lot.

Paul Myers’ career retrospective book, The Kids in the Hall: One Dumb Guy, is in stores and there is all sorts of attention being paid to The Kids in the Hall right now. What does that say to you, that people are still speaking about your work with such reverence 30 years after the fact?

That we actually did comedy that ages well. Saturday Night Live repeats, except for the cowbell scene and things like that, a lot of that won’t age as well. A lot of The Kids in the Hall episodes, whether you think it’s funny or not, at least ages well.

Here comes the “R” word. Are there any plans for another reunion tour or a reboot of the show?

We’re still a group and we usually do something every three or four years. There is talk that Netflix would like us to do a six-episode sketch show like what Mr. Show did. It’s just hard to get us together. Hopefully when we’re all free, there will still be interest.

Do you enjoy the nostalgia or do you prefer to look forward?

I do it all with equal balance. I get the interest in yesteryear, I’m also interested in yesteryear. I in no way think I’m done. I still want to write and direct my own movies. I always think about how the famous architect Frank Lloyd Wright did his best work in his 60s and 70s. I have great reverence for the past but I’m excited about the future. I have a good, healthy balance I think.

Tickets for McDonald’s workshops and show are available online HERE.

- This interview has been edited and condensed.