More Metro Vancouver schools could be built with rooftop playgrounds

How to include schools in more compact, densified neighbourhoods is a question several cities in Metro Vancouver have grappled with over the last few years, and the "urban school model" aims to answer.
0
Jul 22, 2019 7:05 AM By: Gary Mckenna

An elementary school for the yet-to-be built Fraser Mills neighbourhood in southwest Coquitlam is back on School District 43's list of eligible school sites.

According to a city of Coquitlam staff report, the school was taken out of the planning documents in 2015 because SD43 felt it was no longer needed based on student yield projections. 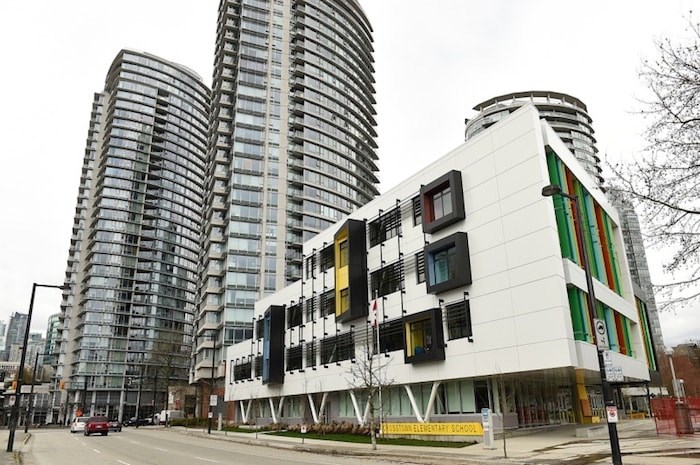 Crosstown elementary in Vancouver opened in 2017 and features a full gymnasium, an unwalled-library and a rooftop outdoor space. File photo/Glacier Media

"However, since that time, several significant changes, including the Supreme Court [of Canada] class size ruling and changes in housing patterns, caused SD43 to undertake further analysis, which resulted in a Fraser Mills school site being again added," the report said.

The city said a school is consistent with the Waterfront Village Centre Neighbourhood Plan, which is guiding the development of the neighbourhood. But the report noted that because of SD43's land needs, finding a location for the facility has been a challenge.

Typically, schools in the Tri-Cities require 1.8 to 2.5 hectares of land, which city staff said is cost prohibitive in neighbourhoods with higher land values. SD43 has agreed to reduce the size of its Fraser Mills school "and the land cost increased to reflect a more urban school model," said the staff report.

The "urban school model" is also being considered for Coquitlam's City Centre neighbourhood, which is currently undergoing a revamp to its neighbourhood plan. With the cost of land rising and city's pushing for more compact neighbourhoods.

How to include schools in more compact, densified neighbourhoods is a question several cities in Metro Vancouver have grappled with over the last few years. The first example in Metro Vancouver, Crosstown elementary, opened in 2017 near Vancouver's Chinatown. Surrounded by highrises, the 320-student, four-storey facility features most of the amenities of a normal elementary school, including a full gymnasium, an unwalled-library and a rooftop outdoor space.

The city of North Vancouver was also considering using the urban school model for a school in lower Lonsdale in 2016.