Mike Howell
Jul 7, 2020 7:53 AM
Vancouver park board commissioners have delayed the launch of a much-anticipated three-month trial for adults to legally drink alcohol in 10 parks this summer and into the fall.

That’s because commissioners were unanimous Monday in requesting staff now consider expanding the proposed 10 drinking sites to parks in all of the city’s 23 neighbourhoods.

Commissioners also want staff to examine tying the consumption of alcohol to a meal, with the goal to attract daytime picnickers over people potentially treating the parks as nightly beer gardens.

Comm. Dave Demers initiated the move, saying he was concerned that limiting the park sites to 10 would require many residents to leave their neighbourhoods to have a picnic.

“I can’t shed the feeling that we’re creating basically 10 beer gardens,” said Demers, who argued the limited number of sites could also challenge physical distancing measures during the pandemic.

“To me, I always thought the core idea of this project was to incentivize people to use their own local park as their own backyard.”

Commissioners also instructed staff to consider allowing the sale of alcohol in some of the concessions at the parks ultimately chosen for the trial. The alcohol would have to be consumed at the park, Comm. John Coupar said.

“That helps the park board, as well, from a revenue stream and it also puts us in line with what restaurants are doing across the city,” he said, noting some restaurants are now selling off-sales to help recoup losses from the pandemic’s hit on the economy.

Staff now has two weeks to consider the commissioners’ requests and report back on what’s feasible for a trial that was anticipated to launch in mid-July.

That report will be heard at the board’s last public meeting of the summer, scheduled for July 20. For the trial to launch, the board would first have to approve an amended proposal and then enact a bylaw.

The board would also need to ensure the provincial government amends the B.C. Liquor Control and Licensing Act — as it has signaled it would — to give the board authority to allow the trial.

A staff report before commissioners Monday proposed sections of 10 parks be used in a trial that would run from mid-July to the Thanksgiving Day weekend in October.

Sites chosen were across the city, from Stanley Park downtown to Fraser River Park in the south and to New Brighton Park near the Ironworkers’ Memorial Bridge. John Hendry Park, Quilchena Park and Harbour Green Park are also on the list. 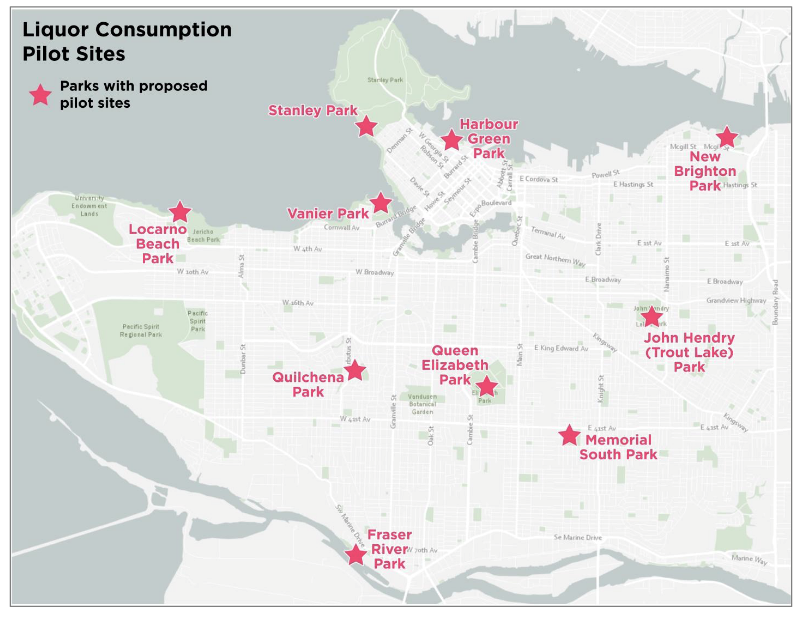 Adults would be able to legally drink in designated areas in those parks between 11 a.m. to 9 p.m. daily.

Park board staff used 13 criteria to choose the parks, including minimal impacts that legal alcohol consumption would have on area residents, proximity to food and beverage services, access to washrooms and to be far enough away from beaches where people swim.

The push for a trial comes during the pandemic, with more people flocking to parks and beaches in Vancouver and across B.C., according to Doug Shearer, the park board’s director of planning and park development. Shearer told commissioners park use in B.C. is up 50 to 70 per cent this year over the same period last year.

The main driver in allowing legal drinking in parks is the recognition that not all residents have access to private outdoor space such as a backyard to have a drink.

That was the motivation for Demers when he first introduced a motion for a trial in December 2018. The park board amended that motion last month to better respond to needs of people shut in during the pandemic.

Comm. Camil Dumont said he recognized that people already illegally drink alcohol in city parks and at beaches. But Dumont said it’s time the board launch a trial to allow for the responsible consumption of alcohol.

“The key word is responsible,” he said.

“All behaviours that fall outside of responsible that would contravene laws or bylaws, I think should be enforced and I think that is the case now, and should continue, regardless of our [trial].”

Commissioners referred the report back to staff after hearing from three speakers, two of whom spoke against the board’s plan to allow the legal consumption of alcohol in parks.

Kitsilano resident Elvira Lount said a trial would only create more noise at parks and encourage “pop-up ravers” to turn designated drinking sites into party zones. Lount said that attraction will become even more pronounced during the pandemic because of nightclub closures.

“In my mind, parks should be places of quiet refuge where you can have physical recreation, you can get together with your friends,” Lount said.

“Some people, at the moment, take a glass of wine and have a picnic. I don’t have a problem with that. But in my 49 years of running and walking around Kits, and observing large groups on the beaches and in the parks, loud music always accompanies the drinking.”

Resident Rick Hurlbut said he supported a trial at parks and it was time to start treating adults as adults.

“If we set the expectations that bad manners won’t be tolerated, we can trust that good behaviour will follow,” Hurlbut told commissioners.

“Now is the time that the nanny state of the past 100 years can finally be relaxed.”

He added that COVID-19 wasn’t the impetus to launch a trial, but that it was ironic the need for policies that foster safe, social gatherings is more apparent than ever, with “the great outdoors identified as the safest place for these social interactions.”

Comm. John Irwin said he appreciated Demers’ move to tie alcohol use to a bylaw that requires a drinker to pair a drink with a meal. That said, his research indicated cities such as Montreal that put this provision in law have seen people bring “faux picnic baskets” to parks.

At the same time, Irwin said, such a bylaw would give park rangers and police “that slight card that they might need at some time.” But Irwin said he was concerned about the scale of the trial in expanding to 23 sites.

“Having 23 very dispersed locations feels a little less like a pilot [program] to me,” said Irwin, noting a letter commissioners received from Vancouver Coastal Health preferred a trial be launched at fewer than 10 sites.

“I don’t want people, especially from my neighbourhood, having to travel in order to be able to have a picnic in the park with some alcohol,” Mackinnon said.

“I would hope that we would be able to do it in our neighbourhood. I’m happy to send this back to staff and to see what they can come up with. I would rather get it right, than get it fast.”