Ada launching. Photo via screengrab, UBC She lost her sail and has a few scratches, but a robotic sailboat has returned home in relatively good condition after being lost at sea. The self-navigating "sailbot" — a 5.
The Canadian Press Mar 5, 2018 7:38 AM 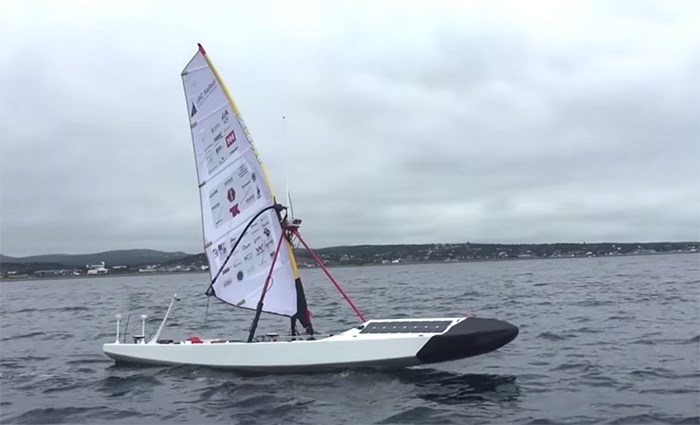 She lost her sail and has a few scratches, but a robotic sailboat has returned home in relatively good condition after being lost at sea.

The self-navigating "sailbot" — a 5.5-metre solar-powered vessel — was rescued off the coast of Florida in December and has now returned to Vancouver.

"We know it's a very big ocean, but the currents would have to lead her to land somewhere, whether it's North America, South America, Europe or Africa," she said.

The group is just glad the boat landed on the right continent, she said.

The team spent years designing and building the sailbot, named Ada, for mathematician Ada Lovelace. As a multi-year project, it involved several different groups of students and hundreds have had their hand in engineering the vessel.

The sailboat departed for Ireland from St. John's, Nfld. on what should have been a three-week journey in August 2016. It fared well in the coastal region, but fell into trouble just days after leaving port, about 700 kilometres offshore, Ramley said.

It went "offline" about 1,200 kilometres out, when the team believes heavy wind and waves knocked the boat's rig down, taking most of the sensors with it.

A research vessel came across the boat in December 2017 and it arrived back in Vancouver about two weeks ago.

"It's pretty amazing to see her back. The moment she arrived, it was very early in the morning and we all had classes, so I was the only one there. But everyone trickled in when they could," Ramley said.

"It was really amazing to see the state she's in — she travelled right through some hurricanes."

The boat's hull remained fully intact, despite some large scrapes down to the carbon fibre. Despite not reaching its destination, Ada set a record for the farthest distance sailed by an autonomous boat across the Atlantic, according to UBC.

The team now plans to study the boat to pick up lessons for the next project.

They're aiming to enter a sailbot in the 3,714-kilometre Victoria to Maui International Yacht Race in 2019 or 2020.

"It's a race normally done by human sailors, we've been in contact with some people who have done it before. Once we finish making Ada 2.0, we'll test her in some high winds off the coast of Vancouver Island," Ramley said.

"Because it's an extra-curricular project, we aren't sticking rigidly to an exact date, but we're aiming for 2019 or 2020."