Mike Howell
Feb 11, 2021 10:49 AM
The BC Coroners Service reported Thursday that 152 people died of a suspected drug overdose in December in the province, making 2020 the worst year on record for deaths caused by illicit drugs.

Total number of deaths reached 1,716 last year, surpassing the previous deadliest year on record — in 2018 — when 1,549 people died across the province. The death toll in 2020 represents an average of almost five people per day who died in B.C.

“While many may think that deaths due to illicit drugs are confined to small areas or populations of the province, in fact people are dying in communities across B.C. from all walks of life and leaving behind broken-hearted families, friends and colleagues,” said Chief Coroner Lisa Lapointe at a news conference Thursday.

Fentanyl, cocaine and methamphetamines continue to be the top drugs involved in the deaths, with post-mortem toxicology results showing a greater number of cases with extreme fentanyl concentrations.

The coroners service data showed an alarming increase of deaths each month since the pandemic was declared in March, with B.C. recording 10 consecutive months with more than 100 deaths. 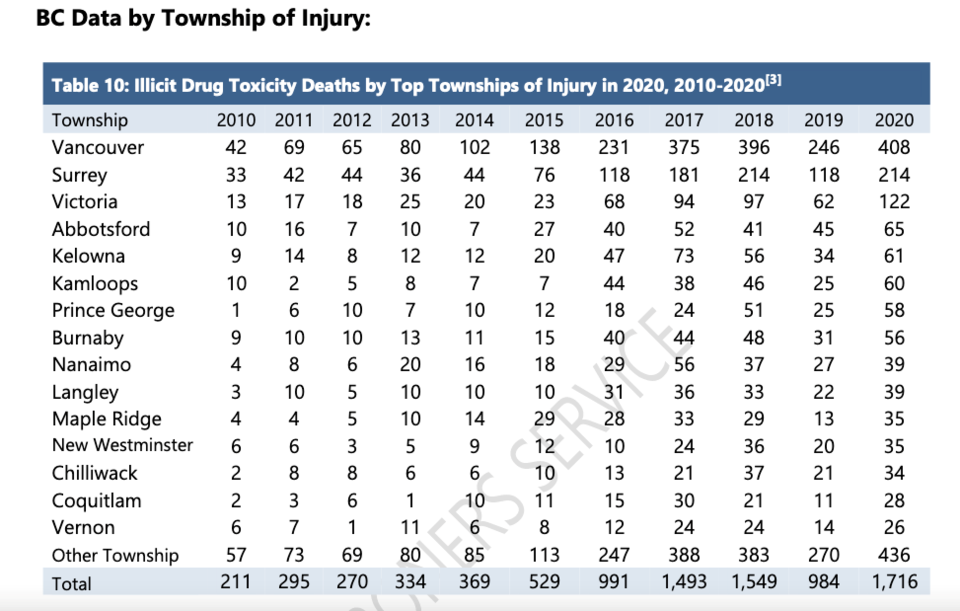 Public health doctors and police have pointed to a more toxic drug supply, with an increased contamination of opioid drugs from illicitly made benzodiazepines. High rates of detection of that deadly combination was evident in toxicology reports over the last year.

No-guest policies in single-room-occupancy hotels was also highlighted by doctors such as Dr. Patricia Daly, the chief medical health officer for Vancouver Coastal Health, in her updates to Vancouver city council last year.

The update Thursday from the coroners service comes after a flurry of recent announcements from Vancouver Mayor Kennedy Stewart and the provincial and federal governments regarding initiatives and programs to combat the overdose crisis.

Stewart announced Jan. 27 that Health Canada will begin formal discussions with him and other leaders in the city on Vancouver’s plan to decriminalize simple possession of illicit drugs. A report in the Globe and Mail Thursday said the B.C. government is also seeking an exemption from federal drug laws to do the same thing province-wide.

Stewart announced Thursday that his office has retained Dr. Kora Debeck, an associate professor in the school of public policy at Simon Fraser University and research scientist with the BC Centre on Substance at Providence Health Care to assist with the city's application for an exemption. The mayor said he anticipates sending the first part of the city's application to Health Canada by March 1.

Stewart said he was "very angry" and "incredibly sad" at hearing the update from the coroners service.

"In my view, this is one of the greatest policy disasters in the history of our province," the mayor said at a separate news conference following the release of the overdose death data.

On Monday, Malcolmson’s ministry announced the first cohort of registered nurses in B.C. was on track to begin prescribing medications for treatment of opioid disorder. On Tuesday, Malcolmson announced that more than 100 new beds across 14 organizations will soon open to treat people struggling with substance use.

Malcolmson noted in a statement Thursday that B.C. was making progress on reducing overdose deaths before the pandemic was declared in March 2020.

"And according to the BC Centre for Disease Control, increases in Naloxone distribution [kits to help prevent an overdose], added supervised consumption and more treatment options have averted more than 6,000 deaths," she said.

Two weeks ago, a coalition of B.C. mayors announced its push to get five “complex care” housing sites opened to treat people living with a mental illness, addiction, or both, who are currently homeless.

The B.C. government says more than 23,000 people in the province are receiving some form of medication-assisted treatment such as hydromorphone and Suboxone for substance use. Injection sites, also known as overdose prevention sites, and Naloxone kits are also widespread in the province.

Despite these efforts, Leslie McBain of Moms Stop the Harm told reporters Thursday that more needs to be done by politicians to reduce the number of deaths, including decriminalizing the possession of personal amounts of drugs.