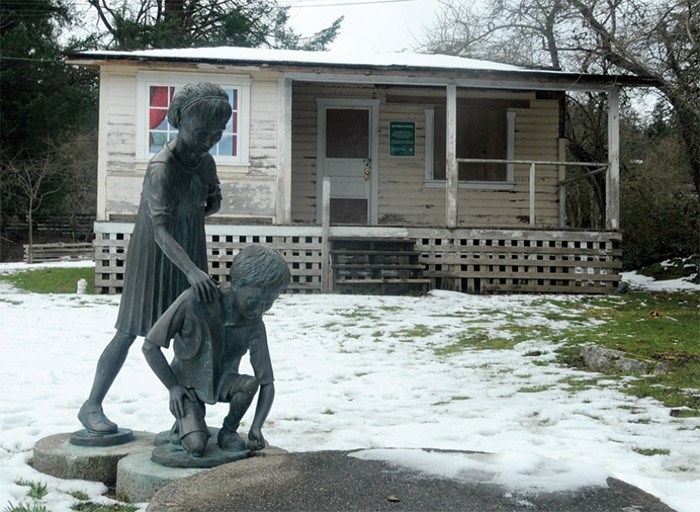 While this cottage has been saved, containers showed up in Davies Orchard last Wednesday to store materials from four cottages which are being destroyed in the near future. Photo Mike Wakefield

“What the hell is going on?” Bowen Heritage board member Judi Gedye said she thought, after seeing containers in the orchard last Wednesday. “We had no notice.”

After frantically contacting Metro Vancouver to find out more details, Gedye said she got an email back stating the four cottages in question would be cleaned out in the next two weeks.

The clean-up order marks the end of a long-standing effort by Bowen Heritage to save the nearly century-old cottages, which are remaining vestiges of a seaside resort from the Union Steamship Company era.

In November, the Metro Parks board voted unanimously for an option that would see Davies Orchard revitalized and six of 10 remaining cottages to be restored. In the 1920s the Union Steamship Company built close to 200 rental cottages on what is now Crippen Park and which is owned by Metro.

Gedye, a driving force to help salvage the cottages, couldn’t help but point out the irony in having the demolition process start during B.C. Heritage Week, saying it couldn’t have been worse timing. Bowen’s heritage preservationists will have a couple of months to claim the contents before the cottages come down.

As Gedye and other Bowen Heritage members go through the cottages and sort through pieces of Davies Orchard history – tubs, windows, shelving, flooring – it’s a painful process.

Bowen Heritage said in November it had 23 local contractors on board to voluntarily rebuild the six cottages that are currently in a state of disrepair, as an alternative to the $1.3 million Metro plans to spend to tear down the four cottages.

Among those impacted in the orchard is artist Bob Bates, who for years has been using one of the ill-fated cottages as a working studio, where he keeps his kilns.

“He is in the middle of a project and was hoping for a few months to finish that before he had to move anything,” said Gedye, who adds there isn’t any other storage on the island to house Bates’ materials or historical items from the cottages.

Bowen Heritage never had a real chance to plead their case to Metro, according to Gedye.

“ … our dreams and hopes have been ignored completely. Metro staff have never once included our submissions for consideration,” said Gedye. “And there are no rights to cross-examine or appeal any submissions of staff, none of whom are from Bowen.”

Metro Vancouver spokesman Greg Valou said temporary storage units were brought in to store material that will be cleaned out of the cottages by regional park staff over the next two weeks. Those storage containers will be kept on site for a couple months to allow “adequate time” for people to sort through the contents.

Through 2018, said Valou, Metro staff will work with a consultant team to complete detailed design of the revitalization plan, which will be implemented starting in 2019.

While an exact cottage demolition timeline has yet to be confirmed, Valou said it will likely happen this spring or summer.

Preliminary orchard maintenance and establishing a licence agreement with Bowen Heritage for continued operation of the museum cottage are part of Metro’s plans for the site this year.