And, the association and other groups assert, that information was illegally shared with the oil industry and the National Energy Board – which is also alleged to have engaged in intelligence gathering. They’re calling it corporate welfare. 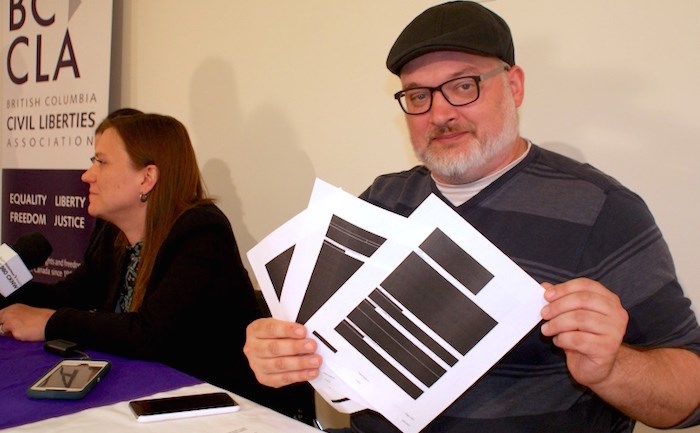 “The Canadian government deployed people to spy on ordinary people,” said Alexandra Woodsworth, spokeswoman for Dogwood BC, one of the surveilled groups. She called CSIS actions “a shocking betrayal” of peoples’ trust in their government.

“Our tax dollars are being used to spy on people on behalf of the fossil fuel companies,” she said.

Association lawyer Meghan McDermott said it is not known whether the decision to monitor the groups came from within CSIS or from higher in the government.

McDermott denounced the state surveillance, saying it puts a chill on speaking out against issues, signing petitions and engaging in peaceful protest.

“This all amounts to a shocking violation of freedom of expression,” she said.

It was a BCCLA complaint filed in February 2014 alleging CSIS was illegally monitoring activities of Dogwood Initiative, ForestEthics (now Stand.Earth), Sierra Club BC, Leadnow.ca and the Indigenous #Idlenomore movement that led to Monday’s disclosures.

CSIS spokesman John Townsend said CSIS investigates activities falling within the definition of threats to the security of Canada and reports on them to the Government of Canada.

He said the definition of threats in the agency’s governing law “specifically excludes lawful protest and dissent.”

Townsend said the Security Intelligence review Committee (SIRC) in 2017 investigated and dismissed the complaint, finding that CSIS had not acted outside of its mandate and that its activities were reasonable and necessary.

“As the judicial review of SIRC’s decision of this complaint is currently before the Court, I’m not able to provide further comment at this time,” Townsend added.

The SIRC decision said, “the service’s collection of information [portion redacted] was lawful and within its mandate, and the service did not investigate activities involving lawful advocacy, protest or dissent.”

And, the decision found, CSIS had not shared information with the petroleum industry.

And, said Enbridge spokeswoman Tracie Kenyon, the company welcomes debate but draws the line when protest activity becomes criminal with the potential to cause serious harm.

The SIRC report, labelled top secret, was done by Yves Fortier, formerly a board member for TransCanada Pipelines, the company behind the Keystone XL pipeline from Alberta to Texas.

The association asked unsuccessfully that Fortier, a lawyer and former ambassador, recuse himself from the investigation.

And, Fortier said, there is no evidence showing CSIS shared information with the National Energy Board.

Public Safety Canada said Minister Ralph Goodale could not comment as the case remains before the courts.

“With the coming into force of our new national security legislation, Bill C59, the law makes very clear that advocacy and protest do not constitute security threats,”the department said in a statement. “Through this new legislation our government has strengthened transparency and the review process has been fortified.”

They can be read online.

“People can look at these documents and decide for themselves,” McDermott said. “If CSIS claims it wasn’t tracking conservation groups in B.C., why did they collect thousands of pages of files relating to groups who engaged in peaceful advocacy and protest?”

She said the association intends to appeal the SIRC decision to the Federal Court of Canada.

“The documents show there was surveillance going on,” McDermott said. “There was no proximity to violence or any security threat.”

Association executive director Josh Paterson was one of those who testified at the hearings. Under a SIRC order, he is forever gagged from saying what he said, heard or saw at the hearings – as are other participants.

He said it was CSIS that did the redaction work.

It appears from the documents that CSIS was investigating domestic extremism and that CSIS briefs stakeholders “through which the service communicates severe emerging domestic threats to certain industries.” Among speakers at such sessions could be the CSIS director general.

In justifying the redactions in the documents, Ministry of Justice lawyer Stephanie Dion said in a July 2017 letter to SIRC that revealing some information would identify CSIS interest in people or groups and harm investigations. Releasing such information could intensify threats to Canada’s security, Dion said. She references “domestic extremism” and threats to infrastructure but much of the redaction request letter is redacted.

A SIRC confidentiality order prevented the association from making a decision and making documents regarding the complaint public, but has been partially lifted.

Vernon said illegal spying on those concerned about protecting the environment is an attack on Canadians’ freedom.

“Why should speaking up for clean drinking water and air free from wildfire smoke make us enemies of the state?” Vernon said. “We won’t stand for it.”

“The state is surveilling and criminalizing Indigenous peoples who are acting within their right to exercise jurisdiction over their lands. This is an abuse of democracy and the nation-to-nation relationship between Indigenous nations and the state. It is clearly about providing a right-of-way for the mining and energy sector.”

Biggs said one of the revelations was that a ForestEthics meeting in a Kelowna church basement was attended by someone from either CSIS or the RCMP.

And, he fears those who have opposed the Trans Mountain pipeline twinning from Edmonton to Burnaby have also been watched using “intimidation tactics by the state.”

This story has been updated with additional details since it was originally published.

Poll: Have you started Christmas shopping? Some finished, many haven't started, and others aren't at all
Dec 4, 2022 4:17 PM