Mike Howell
Aug 31, 2021 4:02 PM
Listen to this article
00:09:00
A former NDP MLA who fought for years to obtain the contract between the B.C. government and Holborn Properties Ltd. to redevelop the Little Mountain social housing site in Vancouver is calling for a public inquiry into what he described as a “sweetheart deal” for the developer.

David Chudnovsky received the purchase and sale agreement Monday after Holborn agreed not to proceed with a judicial review of an order from B.C.’s Office of the Information and Privacy Commissioner to release the contract.

“No wonder Holborn fought so hard to prevent it from being made public,” he said at a news conference Tuesday, standing at the intersection of 37th Avenue and Ontario Street in front of the 15-acre property. “And no wonder they’ve been sitting on the land, doing almost no building for all these years, while the value of the land goes up and up and up.”

The 99-page contract was originally signed in April 2008 and was amended at least twice since then.

It shows the sale price was $334 million, but Chudnovsky’s reading of the contract is that Holborn has only paid about $40 million to the province.

In fact, it was $35 million, according to Michael Cox, a ministry spokesperson for Attorney General David Eby's office; Eby is also responsible for housing in B.C.

Cox said in an email Tuesday that Holborn was given a $211 million loan and an $88 million "credit" towards the promised construction of 234 non-market units on the property. The $35 million was a cash down payment from Holborn to make up the overall $334 million price.

"Approximately $211 million is still owed by Holborn to B.C. Housing secured by the loan," Cox said. "This remaining balance, regardless of work done, must be repaid to B.C. Housing by Dec. 31, 2031, and will begin to bear interest after December 31, 2026."

Chudnovsky said a citizen purchasing a car or house wouldn’t get the same deal.

“We’d expect to start paying it off right away,” he said. “But not Holborn. They get to play by different rules — rules that are laid out in what was until yesterday [when he obtained the contract] a secret deal.”

The contract stipulated that B.C. Housing would pay for environmental remediation, negotiate any First Nations claims, take care of costs for demolition and be responsible for relocating residents of the now-demolished original social housing buildings.

“And there are no deadlines or time limits requiring the developer to build homes by a certain date,” said Chudnovsky, noting the government could have written completion dates for social housing into the contract.

Chudnovsky wants the current NDP-led government to launch a public inquiry and “take back the mountain” so it can turn the property into a “model community” with social, below market and co-op housing.

Money from the sale of the property was to be for what former housing minister Rich Coleman called his “line of credit,” and to be used to leverage more social housing in Vancouver and the rest of the province.

The original agreement with the City of Vancouver was at least 50 per cent of the money from the sale of the property would flow into city coffers for social housing, while the remaining 50 per cent would go to social housing projects in the rest of B.C.

At issue for Chudnovsky and many community advocates for more than a decade was the demolition of the original 1954-era 224 townhouse-like units of social housing on the property and the displacement of residents.

Holborn’s original commitment was to build 234 social housing units, but has only built a 53-unit building, with another 62 units currently under construction. A temporary modular housing complex for homeless people was recently erected on the site.

The updated total number of social housing units planned for the property is 282, with 48 to be owned by the city. Ten of the 282 units will go to the Musqueam Indian Band, according to a separate B.C. Housing document.

A total of 1,500 market units, a childcare facility, neighbourhood house, public plaza and park are also planned for the property, which is bounded by 33rd to 37th avenues between Main and Ontario streets. A new road and extension will also be built. 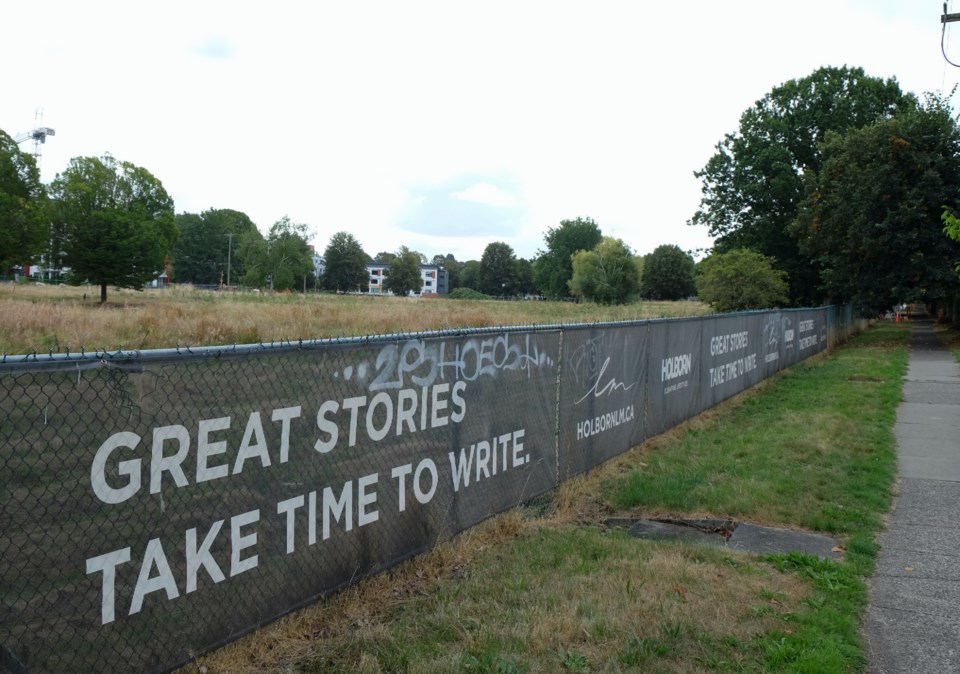 Most of the property is an open field of tall grass and trees, protected by fencing with Holborn banners that appear to be in response to questions of why there has been limited progress on the land.

Glacier Media contacted Holborn via email Tuesday for comment on the contract but had not received a response prior to the posting of this story. When asked in April 2013 how long the entire project would take to complete, the company’s president Joo Kim Tiah said “it’s really due to the market.”

The B.C. Liberals' interim leader, Shirley Bond, said in an emailed statement: "British Columbians expect government to work with municipalities and the industry to create supportive housing. That was the goal of this project, and while proceeds of the sale were used to develop more than 2,100 new supportive housing units across B.C., clearly the intended outcomes have not been met to date. We need to understand why this lack of progress, which is far too common, occurred and how we ensure that all levels of government can improve to prevent significant delays from happening."

The City of Vancouver said in an email Tuesday via its communications staff that Little Mountain will be developed in four phases, but referred questions on development application and construction timelines to Holborn.

Coun. Christine Boyle, who wasn’t on council at the time of the contract being signed, echoed Chudnovsky’s conclusion about the agreement, saying it was a good deal for the developer and “a very bad deal for the rest of us.”

“So the whole thing stinks and I hope we can do something more about it,” she told Glacier Media by telephone Tuesday. “In a best case scenario, the deal gets cancelled or renegotiated to see significantly more public benefit and timelines.”

Boyle noted the “huge need” for affordable housing in Vancouver, where house prices and the cost of rent have skyrocketed since the signing of the agreement in 2008.

“It goes without saying that I am incredibly frustrated, though not surprised to read these details,” said Boyle, referring to the contract being overseen by the former Liberal government.

Coun. Pete Fry was also not on council when the agreement was reached, but agreed a public inquiry should be held over the deal.

“It is odiously perverse that in our city, against a backdrop of dire housing unaffordability, that this particular land has been sitting fallow at a taxpayer-expensed, interest-free holiday for over a decade,” Fry said in an email Tuesday.

“Obviously, this was a pretty sweet deal for Holborn, but I hesitate to single them out — after all, this was the ugly era of wild west campaign contributions to both the provincial and local governments of the day.” 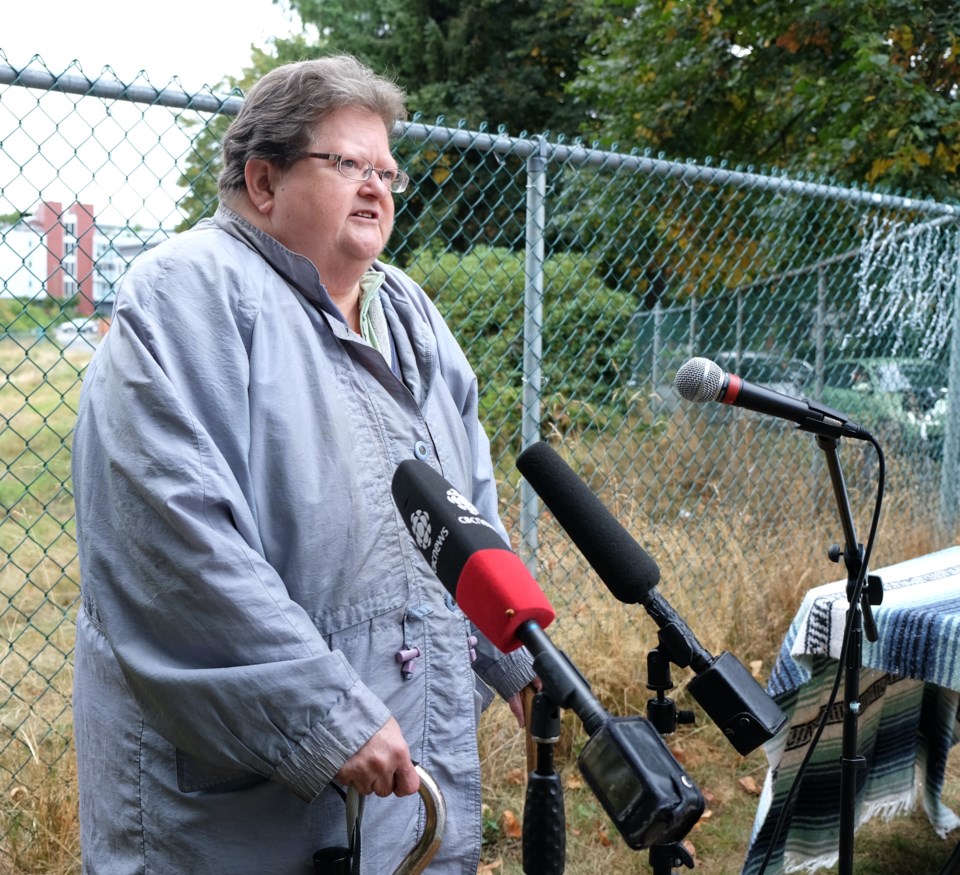 Steenhuisen was among the four remaining families at the old complex and fought eviction notices to remain until the new 53-unit building was opened. She has a place in the new building, but misses her neighbours, some of whom have died.

“The intent originally is that there would be more than one [social housing] building built…so that we’d all be moving back together,” said Steenhuisen, who got emotional as she spoke. “We were truly like one big family here.”

Added Steenhuisen: “This is where I was born and raised. This is where my volunteering is, this is where my support is. I’m not going to leave here until I make sure those units that they promised are replaced.”

Eby was not available Tuesday for an interview. Vancouver Mayor Kennedy Stewart’s director of communications said the mayor wouldn’t comment on the contract until next week, when Eby is expected to address the agreement and questions about the lack of development on the property.

B.C. Housing posted a copy of the agreement on its website Tuesday. It can be viewed here.