From Chinatown to England: Where 15 things from Expo 86 ended up

A roller coaster in St. Louis, a UFO in Terrace and a massive piece of art in Barrie all came from Vancouver's big event

While Vancouver saw a lot of things stick around after Expo 86, plenty was moved.

The legacy of Expo 86 is centered on Vancouver, but ripples out in a very tangible way close to the city. As you get further the pieces are a little rarer.

Locally there was lots that moved a short distance, so let's start there.

Stayed in the neighbourhood

This was part of the Northwest Territories Pavilion during the Expo, made by Alvin Kanak of Rankin Inlet, a village in what is now Nunavut on the edge of Hudson Bay.

It moved to its current location along English Bay in 1987 after it was gifted to the city and sponsored by Coast Hotels.

Chinatown has a famous gate for those entering the community, but a different one was first, originating at the Chinese Pavilion at the Expo.

Called the China Gate, it sits at 50 East Pender St. It runs alongside the road instead of over it, near the Chinese Cultural Centre of Greater Vancouver.

The temporary structures all the pavilions were built out of were pretty sturdy, and a bunch were dismantled shortly after Expo 86 ended, taken down to Delta and reformed as part of the Tillbury Industrial Park, like here at The Linwood Group of Companies. Southland Drilling has a blue one!

And they're not just in Delta; there's a pretty recognizable roof over the tracks in New Westminster at the Krueger property. 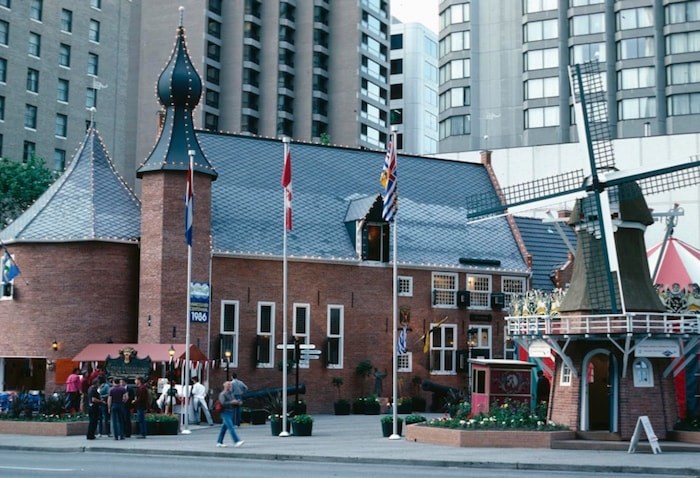 The Dutch castle, a familiar sight in South Richmond, was first located in the heart of Downtown Vancouver during Expo 86. Photograph By AL HARVEY PHOTO (SLIDEFARM.COM)

Down in Richmond sits a piece of Dutch architecture thanks to a B.C. politician who owned a theme park.

The replica of Coeverden Castle sat in downtown Vancouver until it was moved in 1987 at the behest of Premier Bill Vander Zalm. It was taken by barge down to No. 5 Road and then trucked to Fantasy Garden World, which was owned by Vader Zalm. While the park is done for, the castle remains.

A little further south in White Rock sits a bunch of places to sit.

If you've ever walked along the shore and spotted the yellow benches, you've spotted one of the smaller legacies of Expo 86, but also one of the most numerous.

This is just one of the places these benches can be seen; if you spot that type of bench elsewhere it most likely sat at the Expo 86 grounds until it was moved to the spot you've spotted it.

A little further away

If you've ever hoped a ferry over to Gabriola Island and checked out Folklife Village (a shopping center) you've visited one of the more well-traveled pieces of Expo 86 infrastructure.

During the Expo it was the Folklife Pavilion; afterwards, it was packed up until 1993 when it was bought and reassembled into pretty much what it had been before. 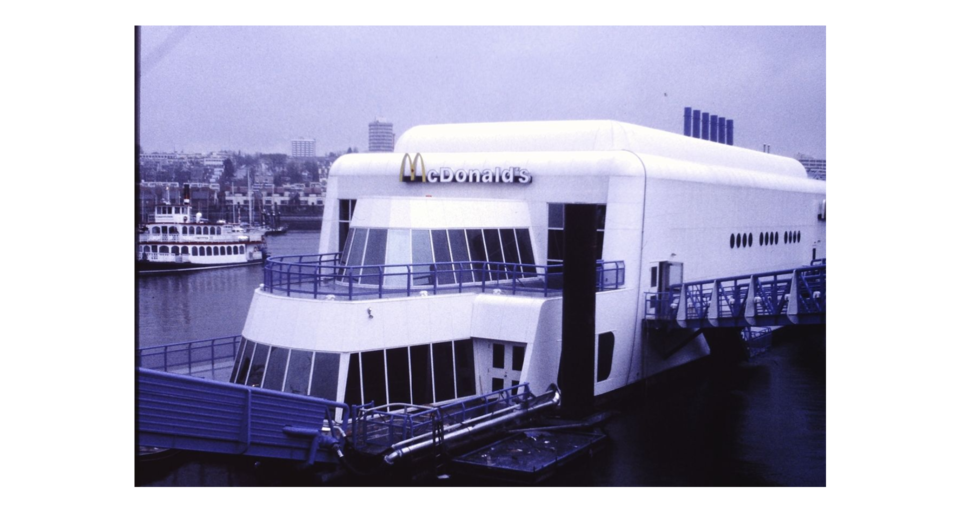 You've probably heard of this by its much more famous nickname, the McBarge. It still exists...mostly.

The fast-food restaurant on a barge doesn't exist, but the boat still floats. It's in Maple Ridge, just sitting there waiting for glory days to return.

It's pretty big. By Brendan Kergin

It's only fitting that Canada should hold this title, and during Expo 86 the Government of Canada made certain of it with this massive piece of sports equipment.

After Expo 86 ended the federal government gifted it to the provincial government who decided to hold a contest to decide which community would get it.

Duncan over on Vancouver Island won and the stick (and a puck) are stuck to the side of a building still.

This restaurant that was built at Expo 86 to feed hungry fair attendees is still functioning as a restaurant, but a bit different.

In 1987 it was trucked up piece by piece to Sechelt and reassembled. And then they added to it by sticking pieces of a space-themed McDonalds on top. That extra structure on top is what gave the new restaurant its name: the Lighthouse Pub.

During Expo 86 a handful of dragon boats were brought to Vancouver. They spent many years afterwards in the water, but fell out of use and went into storage. In 2015 the Shuswap Rowing and Paddling Club decided to get involved and brought them up to Shuswap Lake to restore the fleet.

It's in Terrace at a resort with a wobbly history. However, the recognizable alien spaceship/water feature can be seen in this brochure from the mid-90s and it appears it's still there.

This huge steel piece of art now stands in Barrie, Ontario after being commissioned for Expo 86. It was bought and moved to the city in 1987 where it's become an icon.

This one could be on the move again. In Expo 86 it was the Cariboo Log Chute. After it became the Sissibo Sizzler when it was moved to Annapolis in Nova Scotia.

However, as of last year it looked to be up for sale; no word on where it may be headed now.

Another ride that got a pain job and a new name, the Scream Machine was a popular roller coaster during the Expo. Now it's Ninja at the Six Flags in St. Louis.

It opened at the park in 1989 and has been running ever since.

The furthest any big-ticket item went appears to be the monorail, which once crisscrossed the Expo lands. It was sold to Alton Towers, a theme park in England, where it now crisscrosses the grounds there, doing much the same thing for the last couple of decades. Recently the cars got themed paint jobs, so there's that.

--with files from Matthew Hoekstra