Vancouver’s Planted Meals is another version of a ghost restaurant concept, though co-founder Corbin Lowe described it as a decentralized model.
Hayley Woodin May 1, 2019 5:17 PM 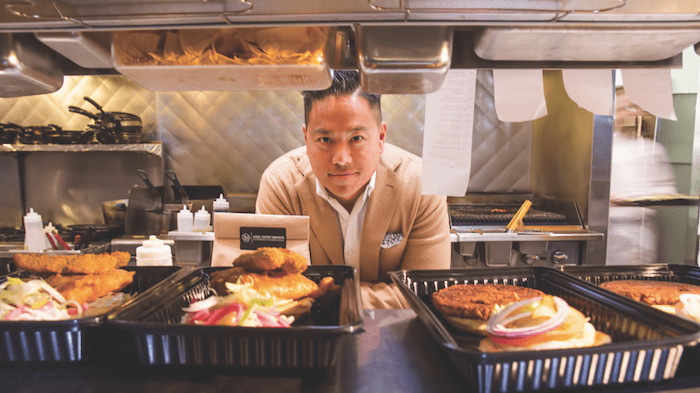 When he was opening his first restaurant at the age of 22, Ryan Moreno got advice to sell pizzas out of the back door of his West Coast cuisine kitchen for an extra source of income.

“‘You can have two businesses in one,’” recalled the Joseph Richard Group (JRG) CEO.

But a decade and a half ago, that felt like biting off more than he could chew.

By the time he opened his first Townhall, Moreno had a concept in place – a delivery-focused business built on the back of the public house – but the marketing and delivery challenges ate into the idea’s feasibility.

A year and a half ago, it clicked.

“It’s a totally different way of looking at a restaurant,” said Moreno.

Instead of running two businesses in one, Meal Ticket Brands will use some JRG kitchens to cook for as many as seven different online restaurant concepts that have no retail footprint.

Consumers ordering food from new brands such as Obey Poke, Power Plant Greens and Frsh Frys will get their meals delivered through Skip the Dishes.

By adding the number of concepts each participating JRG kitchen will be catering for, the company says it was able to launch 100 “ghost restaurants” in a single day.

“Delivery apps have certainly disrupted the industry,” said Alex Fraser, vice-president of western operations with The Fifteen Group, a consulting firm for restaurants and the hospitality industry.

“The profit model that restaurants have to work with is being marginalized so often,” he said, adding that third-party delivery services charge up to 30%, and don’t negotiate.

While apps like Skip and Foodora have opened up new direct-to-consumer opportunities for some, they can be cost-prohibitive for others, as can high lease rates in busy areas.

Vancouver’s Planted Meals is another version of a ghost restaurant concept, though co-founder Corbin Lowe described it as a decentralized model.

Around 80% of the vegan-food provider’s business comes directly from consumers, who can place orders through its website. The food is prepared at a commissary kitchen, which provides commercial kitchen space to businesses.

“We wanted to do it ourselves in a more affordable way. Because obviously ordering food on demand is quite expensive,” Lowe said.

Ian Tostenson, president and CEO of the BC Restaurant and Food Services Association, believes more restaurants will start looking at their kitchen capacity and determining whether they can make better use of their labour and equipment.

On the flip side, he expects more commissary spaces will allow new ideas to enter the market without the businesses behind them having to bear the costs of a retail presence.

"What we’re looking at in our minds here is, ‘Is this going to hurt anybody?’ And I don’t think so,” he said.

“I think it’s a trend that’s definitely going to get more and more creative, and I think you’ll have all sorts of niches.”

On top of the seven brands now live with Meal Ticket Brands, another nine are in development, and Moreno said the company is developing pickup-only kitchens with no storefronts and exploring partnerships with others in the industry to expand a venture designed to leverage third-party services.

While it is unclear what meal delivery services mean for restaurants long-term, there is no doubt that they are disruptive in more ways than one.

For example, a stream of delivery workers entering and leaving a restaurant that wasn’t designed to accommodate deliveries can disrupt the in-house dining experience – so much so that Fraser said The Fifteen Group is contemplating designated takeout areas in new restaurant build-outs.

“They’ve had to react to it and they haven’t been able to really plan for it.”

“We saw the, I believe, writing on the wall a couple years ago when the emergence of this stuff sort of came up. That it was something that you just got to lean into.”