The projects, created by emerging and established artists, are coming to Vancouver as part of a city initiative

Over the next year and a half, a half-dozen city-approved art projects will be created around Vancouver.

The City of Vancouver put out the call for creators for its Artist-Initiated Projects initiative in 2019, and six projects were selected by a panel of artists, curators, and members of the xʷməθkʷəy̓əm (Musqueam), Sḵwx̱wú7mesh (Squamish), and səlilwətaɬ (Tsleil-Waututh) Nations and Urban Indigenous community.

Eric Fredericksen, Head of Public Art with the City of Vancouver says the artists are invited to expand their art practice into the public realm with work that reflects complexities of place and publics, engages cultural practices, and provokes critical dialogue.

“These opportunities provide chances to create public art across the city, without the limitations of a predetermined site, theme, or medium,” Fredericksen said. “This has allowed artists to realize an extraordinary range of projects and to expand on ideas of what public art can be.”

The six artists whose work will be exhibited on Vancouver’s streets include:

George will create a səlilwətaɬ (Tsleil-Waututh) Welcome Pole for šxʷƛ̓ənəq Xwtl’e7énḵ, the plaza of the Queen Elizabeth Theatre. The artwork will reflect the rich history of land use in the Robson Street Corridor by the local Nations for the hunting and harvesting of food and will honour the legacy of the artist’s grandfather the late Chief Dan George.

The Queers’ Vernacular is a public art project that will bring together a series of artist talks by LGBTQ/2S artists to gender and sexuality support groups across Vancouver to create a multilingual and intergenerational “dictionary” of LGBTQ/2S slang. The title of this project references Bruce Rodgers’ book The Queens’ Vernacular (1972), which complied 12,000 entries of pre-Stonewall lingo that had faded out of use as gay culture became assimilated into the mainstream.

Guzman’s series of performances titled archipelago: laro na tayo are based on the childhood game “sipa” (kick) played throughout the Philippines. A precursor to hacky sack, the game also predates the Spanish colonization of the Philippines in the 16th century and is played with a shuttlecock-like object made from a "tingga" (metal washer) wrapped in straw and/or cloth. Guzman’s nomadic and temporary performances will explore the Filipino-Canadian experience, and the complexities of migration, colonization, and multiculturalism. 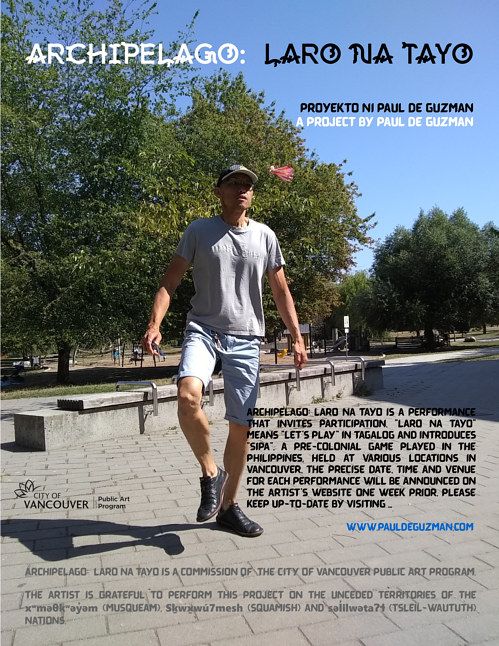 Guzman’s series of performances titled archipelago: laro na tayo are based on the childhood game “sipa” (kick) played throughout the Philippines. . By Paul de Guzman

The renowned performance and media artist Judy Radul will develop an interactive video installation offering a live feed to the large murder of Northwestern crows who use the Vancouver greenways and parks to travel daily back to their roost in Still Creek, Burnaby. The installation’s visuals and sound will be activated by the movement of the crows, who act as a sonic timepiece, “going live” according to their own daily migration across the city based on the time of year.

Tsui is developing a structure that activates the sonic potential of rainwater through a hexagonal pavilion that concentrates rain onto a seven-foot scholar’s rock. Based on the Pagoda of the Gathering Stars (聚星樓), the only surviving ancient pagoda in Hong Kong, this installation examines the architecture vernacular of Chinatowns and the practice of grafting Chinese aesthetic tropes onto urban spaces in order to project an “Imaginary East.”

Jon Sasaki is developing an “anti-monument” that will reflect on the forcible mass confinement and expulsion of Japanese Canadians from Vancouver during the Second World War, and the history of his own family’s internment. Through community consultation and research into the use of the Pacific National Exhibition buildings and stables at Hastings Park as a detainment site in 1942, Sasaki’s work will reflect the impact of internment on the Japanese Canadian community both during and after the war.

The new public art projects are anticipated to be completed by the end of 2023, however, timelines are subject to change.