Floata restaurant owes city more than $300,000 in back rent

Mike Howell
Jun 17, 2021 2:43 PM
An iconic restaurant that has operated in Chinatown for 25 years and served as a venue for politicians to raise money and win votes at election time is in financial straits because of factors related to the pandemic.

And Floata manager Brian Yu wants its landlord — the City of Vancouver — to reduce or waive a portion of the more than $300,000 it owes in back rent so it can keep afloat.

The 800-seat dining hall, which is the largest of its kind in Chinatown and considered an anchor in the community, has seen a drop in business of 50 per cent or more since May 2020, Yu said.

A combination of public health orders to temporarily shut down coupled with restrictions on number of dine-in customers has hit the restaurant hard.

“We have more staff than customers,” said Yu, sitting at one of the many empty tables last Friday afternoon, where six people dined in the massive space.

The restaurant is one of 20 businesses that continue to operate in the Chinatown Plaza on Keefer Street. A total of 11 businesses have closed in the plaza since the pandemic was declared in March 2020. 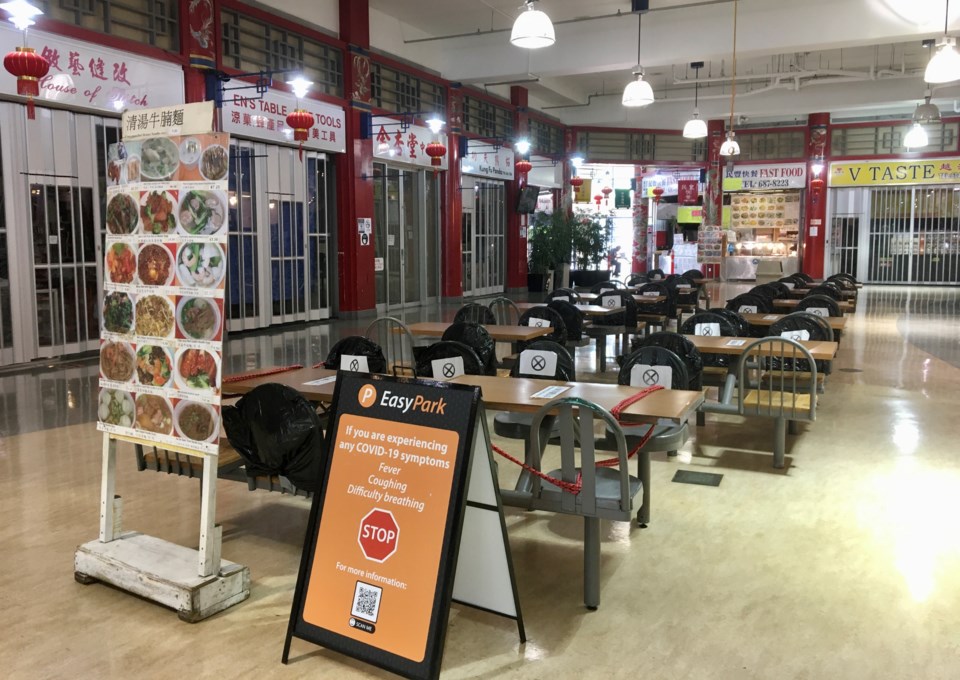 Many of the shops in the Chinatown Plaza have closed since the pandemic was declared in March 2020. Photo Mike Howell

Municipal government landowners such as the city are not eligible for the Canada Emergency Commercial Rent Assistance Program.

However, Yu said the restaurant recently successfully applied for partial wage and rent subsidies under a second phase of the federal COVID-19 relief programs.

“It’s not much, but we are depending on this help,” he said, noting the restaurant had to lay off half of its staff. “For us, the debt is accumulating.”

The city said in an email that it has put in place a program for deferral of rents for “qualifying tenants” of the plaza that allows repayment over 12 months with no penalties.

Yu, who wouldn’t disclose what the restaurant pays per month in rent, said he has yet to work out an agreement with the city. But, he added, he was hoping the mayor or some of the city councillors who understand the restaurant’s significance to the community could find a way to reduce or waive the accumulation of back rent.

“Politicians are benefiting from the exposure when they show up here,” said Yu, referring to the many banquets hosted by political parties and supporters of politicians, including mayors, premiers and prime ministers. “We never charge them much. The pay they give us is not even average.”

The plaza, which includes a large parkade, is one of the properties attached to the city’s Property Endowment Fund, which means the city is legally mandated to lease rents at market value.

However, that policy could be amended by council in the form of a grant to set a long-term lease rate below market rent.

Total gross leasing costs at the plaza currently range from $1,165 to $11,000 per month on average. The price depends on the size of space, location and use, according to the city.

Mayor Kennedy Stewart wasn’t aware of the Floata’s financial situation until told Tuesday by Glacier Media. Stewart, who has attended many banquets at the restaurant, said he would have his staff investigate, but made no promises.

“Our goal is to have everybody survive COVID and thrive afterwards,” the mayor said. “You hate to do it on a case-by-case basis, but if that’s the only way it can be done, that’s how we should address it.”

Added Stewart: “We’re still in a state of emergency, and that’s what our job is — is to be flexible and adapt.”

Councillors Sarah Kirby-Yung and Pete Fry attended a meeting at the Floata Monday night to hear from businesses and community leaders about several issues facing Chinatown.

The pandemic has forced the closure of many businesses in the neighbourhood. The community has also seen a dramatic rise in anti-Asian racism, street disorder and graffiti.

Kirby-Yung said her concern about making a special provision for one business operating out of a city building would generate demands from others who pay rent to the city.

“It’s not that I don’t have a lot of heart for Floata — I absolutely do — but if you did it for a for-profit business, you would conceivably set a precedent and would have to do that for all the for-profit businesses operating on city property,” Kirby-Yung said.

The Floata is owned by a group of shareholders, many of whom are retired and living in Hong Kong.

Fry agreed with Kirby-Yung, saying it would be a challenge to start providing grants to for-profit businesses hit hard by the pandemic.

“Then who do we not give grants to?” said Fry, who lives near Chinatown in Strathcona. “The reality is we would not alone be able to keep Floata afloat through city grants because we have a lot of competing priorities.”

Last fall, Kirby-Yung and Fry successfully moved motions at council to have the mayor push the federal government to provide funding for Chinatown businesses — particularly “legacy businesses” — hit hard by the pandemic.

But so far, nothing specific to Chinatown has been created.

The two councillors also requested an increase in cleaning programs, an examination of parking meter rates, activating the underutilized parkade at the plaza for such events as public markets and improving safety.

“We need to invest more resources as a city just to ensure that Chinatown is not completely subsumed with graffiti and litter and people doing drugs in doorways and that kind of thing,” Fry said. “Those things are a real deterrent for people attending Chinatown and businesses like Floata — even before the pandemic.”

Yu, meanwhile, said the restaurant will continue to operate until further notice, noting it has yet to return to evening dining because of the huge drop in customers.

The price of pork, poultry and some local ingredients have also gone up, presenting another challenge for the business, he said, noting he’s taken a second job to make ends meet.

“We keep on going because we still think there’s a purpose for this restaurant,” said Yu, noting the Floata made 300 meals per day for Chinese seniors in the neighbourhood during the restaurant’s closure in the early months of the pandemic, with money coming from various donors, including Lululemon founder Chip Wilson.

For an in-depth look at the state of Chinatown, click here.

Amtrak trains between Vancouver and Seattle back on track
Jul 2, 2022 3:54 PM