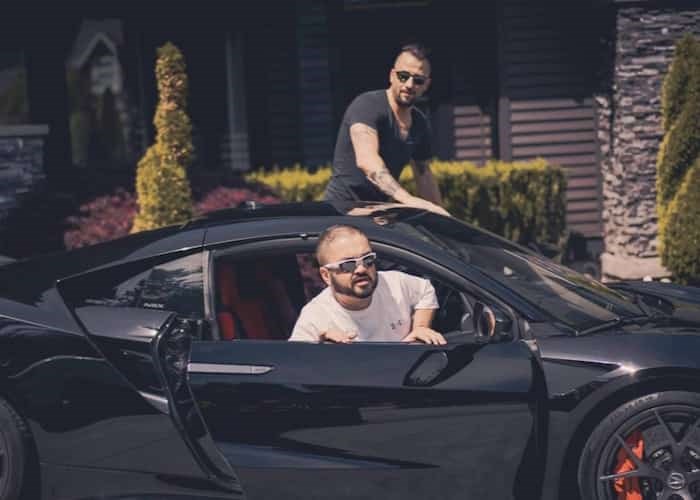 Justin Polsz, foreground, said he threw the party as a networking event and ‘grand finale’ after a year in the Anmore home. Photograph on Instagram

And one angry mayor.

The quiet village of Anmore got noisy Saturday night as a massive house party cluttered the streets with limousines, high-end sports cars — including several Lamborghinis — and featured several backyard helicopter landings and takeoffs.

Now, Mayor John McEwen said village council will be looking into the issue at its meeting this week and is talking with police about the legalities of landing small aircraft on residential property.

But Justin Plosz, who said he was renting the Birch Wynde home where Saturday's bash was held, shrugged off the controversy when contacted by The Tri-City News Tuesday afternoon. He said he has since moved out of the 8,800-sq. ft. estate after living there for a year and is already organizing another party at a mansion on the waterfront in Belcarra.

"We can park some yachts there," he said. "We are planning on renting monster trucks for that one."

He acknowledged that police visited the Anmore home several times over the course of the evening and that one person had to be resuscitated after overdosing.

Coquitlam RCMP confirmed that one person overdosed at the party and was resuscitated before refusing further medical treatment.

Mayor McEwen said he was not happy with Saturday night's activities and many residents have told him they are concerned more parties will be held in the community.

"It is certainly not something we want to be proud of," he said. "It certainly caused quite an uproar in the community."

He added that the owner of the home, which land title documents show is registered to a Jing Sun, is an offshore investor who rents out the property. McEwen said he is concerned not enough due diligence is being done when screening tenants.

Having multiple helicopters landing in a residential neighbourhood presents risks, he added, saying the village will be looking into the legalities of using backyards as helipads.

"The neighbours are just like 'What is going on here?' " he said, adding the issue will come up at a council meeting this week. "I can assure you the village is going to be taking this very seriously."